I’d like to say it had a profound effect on me. In some ways, at least initially, it did. Then it was just a no-issue kind of thing I didn’t think about much. It was no longer, “I’m giving something up, and this is what I’m gaining”; it became, “Social what?”

I like aspects of social media, but inside a couple months, I realized I could never see it again and be absolutely fine with that.

But since I can now jump on Facebook, Twitter, and Google Plus to say, “Check out what happened when I gave up social media for 101 days,” I should probably write a bit more, huh?

On August 14, after reading about Monica Valentinelli’s experiences with a 100-Day Social Media Blackout, I toyed with the idea of a 30-day break. Discussions on my personal Facebook page led to me not only taking the challenge, but deciding to go 50 days. I started the break at 8:00 that evening.

Along the way, CM Stewart dared me to go 100 days. I decided to take the challenge and add a day, going 101 days without Facebook, Twitter, and Google+.

At first I missed social media.

Like most people using social media, I check things on my computer at home and on my phone when I’m on the go. While I don’t have a single push notification set on my phone and probably never will, I still built up a not-so-healthy Pavlovian reaction to social media.

You get the picture.

Since I couldn’t take part in social media, I blogged about the break — anything for that connection.

Mornings — particularly weekend mornings — are when I missed social media the most. It was a trigger: sit down at desk; check social media.

One morning I sat down and didn’t have that urge. When a week passed without the urge, it wasn’t profound — it was more like, “How ’bout that: I didn’t miss social media this week…” and moved on.

That’s when I realized what I gained by taking the break.

The Return of Focus

There was a time when writing and a few other things important to me were always on my mind. Without interruption, I looked at things in so many different ways that when I sat down to write, the words always flowed. When I started using Facebook and other social media sites more, that focus slipped away. Time I once spent sitting at my desk and focusing on ideas became, “Let me check Facebook.”

When I reached the end of a scene while writing, instead of continuing or thinking about other things that kept my focus on writing, I checked Twitter. That led to articles to read (or mark for reading later, which made it seem like I was always behind on things). By the time I returned to writing, I was thinking about other stuff or feeling like I had more to do than I did before opening Twitter.

Even though I close my Web browser and put my phone away when I write, I still checked Facebook, Twitter, and Google+ when I reached a stopping point. During my 101-day social media break, that stopped — and cool things happened.

I enjoyed time with others even more. Sitting on the balcony while drinking coffee or tea with my wife, I left my phone inside. We didn’t interrupt that time by checking things online.

I read even more than usual, and didn’t feel the urge to check social media when I reached a stopping point.

I started a new novel earlier than planned, the words flowing when I wrote the opening. And they continue to flow in ways I never imagined. (I’m pleased with what I’m writing enough that I considered not going back to social media until I’m done with the first draft. Still not ruling that out.)

I returned to reading longer articles when I was online. Gone was the “too long; did not read” reaction. (Spreaking of tl;dr, I wonder how many people will read this entire entry.) With no access to social media, people weren’t sharing as many articles with me and then asking what I thought about them. I chose what I wanted to read and enjoyed taking my time. (My internal reading voice is back to the speed I use when reading things out loud, not the “hurrymustreadfastsomuchtodothatI’mnotenjoyingthisasmuchasIshould!” voice that comes when I feel bombarded by information.)

And that’s the thing…

During the social media break, I didn’t see any talk about politics — for or against where I lean politically.

And I liked that.

I didn’t see what people were listening to on Spotify, what games they played, or what their favorite sports team did. (Should you think I’m knocking those things, I’m quite fond of Spotify, I like Angry Birds and Cut the Rope, and I enjoy watching the Chicago Bears and Chicago Blackhawks when I have the time. I just don’t want a social network filling the social media feeds of my friends with all that information. It’s reached a point where some social networks do it automatically.)

No social “media gurus” following “a formula for success” they’d love to share with me; no Twitter feed packed with blocks of names of people I should follow (with no explanation why I should follow them) on Fridays.

I saw no online drama; I wasn’t asked to post something as my status for an hour in support of some cause I may or may not believe in.

I’ve always been good at filtering out all the noise in the world, but somewhere in the 101-day social media break I realized that’s not necessarily a skill I like being good at.

The last 101 days have been very quiet.

And I liked that.

I Didn’t Miss Out

When I started the social media break, I had some friends tell me they’d die without Facebook.

How could I go to a conference and not follow what’s happening on Twitter? (The answer: I’m at the conference — I know what’s going on, and furthermore, I’m not missing the things I once missed because I’m watching it through an iPhone screen.)

“You rank high on Google searches for ‘Google Plus for writers’; don’t you want to keep creating things on Google Plus to up your ranking?” (I wrote my Google Plus for Writers entry for a couple people I know — not in the hope it would rank high on Google. Admittedly, I will occasionally consider SEO when writing a headline, but I never write entries specifically for the sake of SEO. Write enough and guess what? Sometimes you’ll pull a high Google ranking.)

When I started the break, I did think about all the things I was missing.

But I didn’t die without Facebook; in fact, I got even more stuff done during the break. I thought when I went to Podcamp Dallas that I’d miss Twitter. (I didn’t.) I missed Google Plus for the people I follow there; not for the benefit to SEO.

What about Social Media Now?

This doesn’t mean I’m now against social media or that I don’t recognize that it goes both ways — because I do.

Do people need to see this photo I took of the kabobs at Cafe Elite? 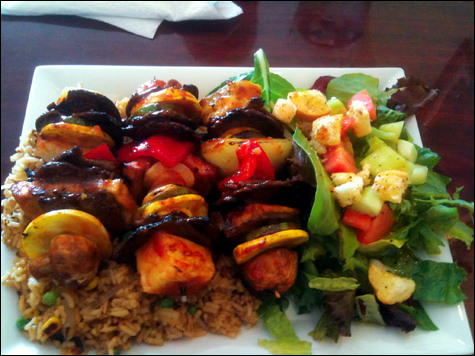 Do people really need to know that I think the video below is the funniest thing on the Internet in months? (Should you think I’m being political, I’d laugh just as hard were it a candidate I support. This isn’t about politics; it’s about creativity and wordplay and how it all registers in the brain to me, and it never gets old!)

Do you need to see another video of me juggling to surf music?

Okay, so maybe some people do. And I’m with them.

The Good and the Bad

What I missed about social media during the break were the photos of what friends and acquaintances were up to. I missed people sharing things they saw, thought about, and knew others would like. I’m a sucker for short videos or just reading a quick entry about what a friend did while I was doing something else.

At its worst — for me — social media is a noisy distraction. At its best, though, it connects me to others I often can’t see in person.

There’s no denying social media’s appeal. I can’t tell you how many conversations with friends and family over the past 101 days began with an assumption that I knew what somebody was doing because it was discussed on a social network. People started saying, “So how ’bout so-and-so’s good news?” followed by, “That’s right, you probably don’t know about that…”

And they’re right, in most cases I didn’t.

So What Did I Miss?

I missed people mentioning that they liked Hell Comes with Wood Paneled Doors….

I was always more likely to reply to others than post and promote, but I may talk about what I’m doing a little more than I used to.

I will continue replying to others when I do check social networks.

I think that’s where the biggest change will occur: I don’t plan to check things as much. I won’t allow the Pavlovian effect to creep back. I plan to log out of networks so that reflex of just going there and it’s all open and ready remains a thing of the past. I may keep the Facebook, Twitter, and Google Plus apps off my phone — not sure about that one, yet.

I may cut back on the people I follow. Even with Circles in Google Plus, Columns in TweetDeck, and whatever Facebook’s come up with to create groups, it still feels so…overwhelming to keep up with it all. I’m a better writer when I’m not surrounded by noise.

Really, I don’t know what I’ll do now that I’m returning to social media because I haven’t given it too much thought.

I have a feeling, as long as it stays that way, things will work out well…