You are here: Home / Miscellaneous / A Change in Writing Plans? 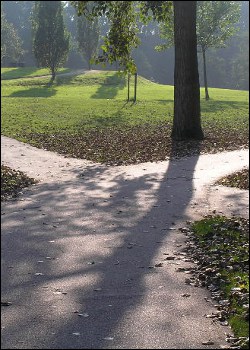 “Two roads diverged in a yellow wood,
And sorry I could not travel both
And be one traveler, long I stood
And looked down one as far as I could
To where it bent in the undergrowth;”
— Robert Frost, “The Road Not Taken”

Lately — aside from The Juggling Writer — when I have time to write, it’s been spent rewriting my second novel, Glimpses.

While I shelved Glimpses in the past to work on the novel I’m currently shopping around, I’ve been planning to release it as an ebook. Having two novels available instead of just one seems like a good idea.

But then the weather changed…

It was a hot summer in north Texas — the hottest on record, in fact. In the past week, though, there have been moments of relief, with lows in the upper 50s and low 60s, instead of the mid 80s. Highs in the upper 70s and lower 80s, instead of pushing 110. Last weekend, it even rained!

While a far cry from fall-like weather, it’s still been enough to flip that switch inside my head.

Something happens to me when the weather turns cooler. That chill in the air manifests itself as electric writing energy, making me want to open the windows and work on something new!

But I’m supposed to be working on a rewrite.

What’s a writer to do?

Which Road to Take?

Two roads diverged in a wood, and I–
I took the one less traveled by,
And that has made all the difference.

The new novel is something that requires a bit of a disconnect from things; it’s something best written in absolute solitude — not a bustling cafeteria. So I’ll work on that at home, late at night, or early in the morning when the world is most quiet.

If juggling for 30 years has taught me nothing else, it’s that there’s usually more time than we initially think in all those throws and catches when starting something new. So my decision isn’t too difficult: while I prefer to take the road less traveled, sometimes it’s possible to walk two roads…