You are here: Home / Articles / Dealing in Change 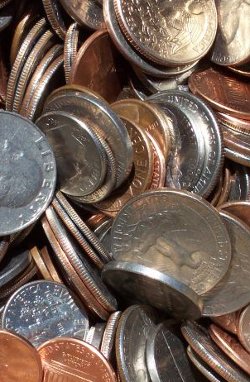 I don’t know a nurse or a project manager who would work 6 or 7 days a week for that kind of money.

I’ve done some crappy jobs in my time, and the people who paid me very little and treated me poorly gave me more credit than many writers give themselves.

When I used to read about writers who took low-paying jobs, it angered me. I’d read about it and think, “They’re ruining pay rates for the rest of us!”

While there’s some truth to that statement, if somebody offers to pay a laughable rate and people are willing to take the job, that’s what the market supports. I think it insults some writers not so much because of the low pay, but because it means the content we create is no longer the rare commodity that it once was.

Anybody can do it!

When it comes to sharing information, I believe anybody can learn to write a basic article that they can be paid for.

I can’t even begin talking about how much this used to bother me — I was clearly on the side of writers who fumed, claiming that these cheap writers were creating unfair conditions for the rest of us. But when you cling to old standards that are being torn down all around, whether you like it or not, you’re going to be left standing there, skinned, like a dinosaur in a museum going nowhere.

So why doesn’t this bother me like it once did?

Change forces me to adapt

I’ve always heard, “Nobody likes change,” but I typically do. (And when I don’t like it, I eventually come around to seeing the good even in an unfortunate situation.)

Change forces me to focus; change forces all of us to keep striving for more, instead of hiding behind the status quo.

While there are people writing 1,000 – 2,500-word articles for $5 – $25, there are still plenty of markets willing to pay more for quality. Perhaps in some of those markets the competition has increased because as one market falls, those clinging to it rush into another, but there’s always room for good content.

Most of the articles I’ve been paid for were very informative, but I rarely pushed myself when writing those articles. I wrote some articles solely because I was paid a decent rate to produce content.

With more competition and people willing to write informative articles for a handful of change, I have to now rise above just being informative. As I look at the articles I want to write in 2010, I’m looking at them more like I look at writing fiction.

I wouldn’t write a story just for money, and from now on, I’m only going to pitch articles I really want to write, articles that are more fun and rewarding, instead of just informative content for cash.

Change forces me to be the best I can be

With some markets for informative content being filled by people writing for less spare change than they’d probably make begging in the streets, my competition consists of great writers who are informative and entertaining.

To compete with better writers, I have to become a better writer. I can no longer do just enough to complete an assignment — I now have to put into non-fiction as much as I’ve put into fiction.

I should have been doing this all along.

If all you strive for is mediocrity, it’s not hard to attain.

To make it now, I have to be even better.

Change forces me to look at the value of free

While there may be a day I monetize this blog, I’m creating content for free.

If I applied that rate to The Juggling Writer, I’ve given away over $10,000 of content in three months.

Some people would look at that and say I’m insane!

To me, it would be insane to create the content I’ve created on this blog for approximately $500, writing for somebody else making most of the money.

Some people may be willing to take a fistful of singles for thousands of words of content, but I’m not one of those people.

In Chris Anderson’s book, Free, he talks about how when something that was once a commodity becomes common, its physical value (i.e., monetary value) is greatly reduced, or becomes free.

With so many sources of information available for free — like it or not — it’s in a writer’s best interest to at least consider offering some free content.

The Juggling Writer may not be making me money, but I enjoy challenging myself to keep a regular schedule. I get to think about writing more by writing about it almost daily. And if something I’ve written helps somebody else, as sappy as it sounds, there are times that means so much more to me than even decent money.

Change makes me look to the future

When you are at a decent enough job; when you are writing informative content because it pays well; when you are doing anything for the sake of comfort, your world is eventually going to come apart all around you.

I was raised to believe if I stuck with a job I could kind of stomach that I could eke out a decent living.

After 5 or 6 layoffs in approximately 10 years, I’ve realized that’s no longer the case.

Change is inevitable and, many times, that change isn’t for the better.

Newspapers, which have been good to me, are on their knees. Publishers cling to what used to work and ignore new possibilities. Writers complain about other writers doing what they do for a fraction of what they were once paid. It seems every week, lately, there’s been somebody claiming that the end times of publishing are nigh.

But if you are open to change and look around and forward, there are so many possibilities for writers right now.

While many claim it’s the worst time ever to be a writer, I’m looking ahead and more excited than ever.

I wouldn’t be this excited had things never changed somewhere along the way.

Change makes me love writing like I did in the beginning

I love working on The Juggling Writer entries.

I love working on article ideas.

I love working on fiction.

I love thinking about other kinds of writing I haven’t done for years, or never tried.

I’ve been thinking about a lot of things since being laid off in December. The big thing on my mind: writing!

I’ve focused on “balancing” my career and passions, and have had sloppy luck at both pursuits. This isn’t to say I haven’t had successes with writing and jobs, but I’ve looked at writing and work the way I was taught. You go to work, work hard, and all is well. Don’t make waves, keep your head down, and do the right thing. Do this, and you’ll retire with security. We know that’s no longer the case, and it’s in our best interests to embrace the inevitable changes.

With non-fiction, I walked right in and had success. (It just wasn’t what I wanted to do full time.) With fiction, I bought into old methods and hit a lot of walls. When doors opened — granted — they were big doors, but even they ultimately closed before I was invited in to live the big dream. Over time, it’s easy to get frustrated, wondering if the big break will ever come. My love of the process became a little stale.

My love of writing has never wavered, though. Writing is something I’d do whether I’m paid for it or not. I write not because I have to; I write because I want to!

There have been times over the years that I forgot that.

There have been times over the years that big dreams got in the way of what I loved.

I don’t know what the future holds, but I know there will be a lot more change — good and bad. I can’t control a lot of the change coming my way.

There’s only one thing I can know for sure: I will always love writing and never stop!

Whether it becomes a part time job, a full time job, or if nobody ever reads another word by me, I will write until the day I die and put all I’ve got into every word!

I may not make enough change to fill my pockets, but by changing the way I look at writing, I’ll always be able to sit down at my desk and do what I love for all the right reasons.