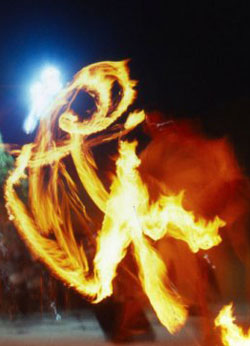 Before I ever made money writing, I made money juggling. When I started writing, I realized many of the lessons learned from street performing applied to writing.

The first time I juggled for money, I was given permission to juggle in the plaza in front of Dallas’ West End Marketplace. I went to Dallas by myself, determined to overcome incredible shyness and do something I loved for anybody willing to watch.

It took me forever to get the courage up to start juggling. There was a small group of bikers sitting nearby. One of the bikers — a guy in a Confederate hat and t-shirt reading something along the lines of If I owned Texas and Heaven, I’d rent out Heaven and live in Texas — overheard me talking with a hot dog vendor about being nervous to start performing. The biker told me he and his friends would make a lot of noise and to just go for it!

I didn’t have a routine planned out, or even a vague idea of what I’d do. So I did what I knew and started juggling.

I remember looking up at one point and seeing hundreds of people watching me — they weren’t there when I started. I didn’t drop once during the entire routine. I finished with torches. I finished the torch routine with the hurl-the-torch-way-up-in-the-air-and-hope-you-don’t-catch-the-fire-end finish!

Hearing the smack of the handle in my hand and the crowd’s wild applause brought me back to reality. I was so amazed that I did it that I didn’t gesture to my hat. The biker in the Confederate hat yelled and clapped and rushed to my hat with a $5 or $10 bill. People followed his lead.

It was the most money I ever made in 10 minutes.

1. To get attention, you have to start. I spent years juggling alone in my backyard, but it wasn’t until I stepped into the street that I forced myself to think about juggling differently and strive to get better.

A lot of people talk about wanting to write, but never put down a word. Others write with the hope of publication, but are afraid to submit their work. With street performing, writing, or anything — sooner or later you have to get out there and just do it!

2. Recognize the importance of relationships. A magician I knew put me in touch with the person who gave the go ahead for performers in West End Plaza. In return for the crowds I drew for the hot dog vendor, he told people who stopped by his stand that if they stuck around, they’d get to see some cool juggling.

We’ve all heard “It’s who you know,” when it comes to writing success. You don’t need to know people to get started, but success in writing is as much about relationships as it is about skill.

Editors and agents want to work with writers who are easy to deal with — writers who have formed relationships that will help move what they write. Be genuine, and get out in the streets meeting people! Even if you never make it writing, you’ll have friends…and there’s a lot worse in life than being around people who want to be around you.

3. You will find unexpected allies along the way. I’m sure I would have overcome my stage fright and juggled in front of a large crowd, but I don’t think I would have found the courage to do it that first day had it not been for the biker who told me to just do it!

While you will make allies through the relationships you form, there will be allies you don’t know who will help you along the way. When I wrote independent comic books, it was always a thrill to get e-mail from a friend telling me that a publication wrote about something I’d written.

The streets are full of unlikely allies if you’re brave enough to step out.

4. Have confidence. When I stepped into the streets, I was confident that I was a good juggler (shyness was my problem).  I worked hard to get to where I was and knew I deserved a shot. Sadly, many talented people think they aren’t entitled to doing certain things.

Many people who have done big things in their lives weren’t entitled at first, either.

What makes a writer entitled enough to begin submitting their work? Lots of practice, honesty with their abilities, and learning how the business works. Know that much and I have news for you: you’re more entitled than most people submitting their writing.

Throw in some confidence and you’re even better off!

5. Take chances. I could have been safe with my finale the first time I performed. Instead, I took chances: doing moves I didn’t always pull off, and finishing by hurling a torch high into the air. I wish I could go back and watch that moment. I’d love to see that torch spinning 25 feet in the air with me and a large crowd looking up, all wondering how it was going to end.

I could have dropped the torch or caught the fiery end. Odds were better that one of those situations was more likely than catching the torch by the handle. I took a chance that paid off.

Take chances with your writing. While there is nothing wrong with a perfect and safe story or article each time you finish something, the writers who rise above the crowd are often writers not afraid to take chances.

Few things are more exciting than watching (or reading) somebody doing something we’re not sure they’ll pull off. Don’t be afraid to hurl your writing skyward and see what happens.