You are here: Home / Miscellaneous / Are Writers Liars? 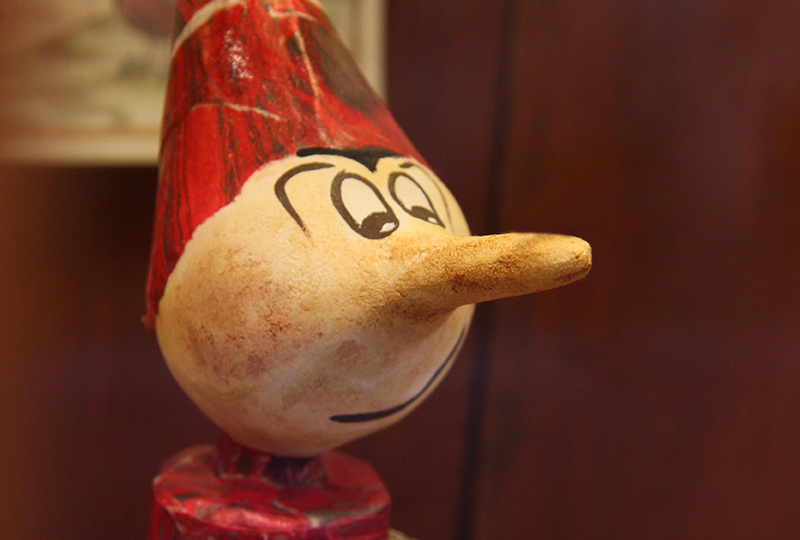 I sometimes feel like I begin too many entries, here, with, “So I was listening to Jess Walter and Sherman Alexie on the Tiny Sense of Accomplishment podcast…”

But it’s that good!

In the most recent episode, Sherman and Jess talk about writers and lying. Some quotes from that section:

I make stuff up at parties because you’re at a party and you’re telling a story and then something occurs to you that makes the story better, so you go with the lie.
– Sherman Alexie

You can tell your kid should be a writer if they tell lies with no gain — no outcome in their benefit. They just do it.
– Jess Walter

…if you lie for no reason, you’re probably a novelist…or a psychopath.
– Jess Walter

Sherman Alexie goes as far as embellishing stories so much that the stories he tells sometimes become truth in his mind — something he believes actually happened, even though it didn’t.

I Used to Be a Big Ol’ Liarhead

Unless I know you well, I’m probably going to be quiet if you see me. At parties, I gravitate toward corners and [generally] look for the first opportunity to leave. Even when meeting friends for lunch, once there are 4-6 people present, I go silent.

So I am not Sherman Alexie at parties, regaling people with embellished stories.

Still, I’d be lying if I said there was never a time in my life where I embellished truths/outright lied like Sherman Alexie.

But first, some history…

My Father, the Liar

My father was a liar. His life was coming up in a fairly shitty family and then getting married, having kids, divorcing…all while working as a mechanic — a job he never really liked.

My father could tell stories. He was the life of any party, and to see him work a room was a thing to behold. The boundary of truth and fiction was blurred to the point that even his greatest lies became who he truly was.

In those lies was the man my father could have been.

The lies my father told made life bearable for him.

And my sister and I got that gene…

I understand why my father told lies.

I understand where Sherman Alexie is coming from.

When you think about it, we live in a world full of stories: drama on TV, in the movies, and in the pages of novels. Even on commercials.

The fictional lives we flock to are more than most of us will ever be. We gravitate toward stories to be reminded what humans are capable of doing, but also to imagine our own potential for something more — even if it’s watching horrible people on screen doing terrible things and being happy that is not the life we lead.

So it’s only natural that stories [at least in part] shape our lives. I don’t know a person who hasn’t been influenced by a novel, movie, or article in some manner.

And for those with brains wired a certain way, reality is clay and the stories told are hands sculpting “reality.”

The Day I [Sort Of] Stopped Lying

Okay, so I said I got my father’s liarhead gene. Those who met me later in life might be surprised to hear that.

Again, unless it’s a one-on-one conversation, or a small group I’m very comfortable with, I’m generally very quiet. When I speak to most people, it’s not particularly exciting. I talk about work and what I’ve been up to. It’s only around those I’m close to that I open up and talk about writing and podcasting and the things that mean the most to me. When I do speak up, I talk more about ideas than about people and things.

But it wasn’t always this way…

An example. This was the reality: In high school, I helped a friend’s little brother move a bale of hay from ground level to the loft of a small barn they had in their backyard for their horse. And we completed the task.

When I visited another friend later that day and he asked what I’d been up to, I mentioned I’d helped clean the barn and put a hay bale in the loft. And that’s when my mind realized that was a boring story. So something sparked in my brain and this is what spilled out of my mouth:

“We were raising the hay bale to the loft, and the rope slipped from our hands. The bale was almost to loft level, and it came down on Marc.”

Of course, the paths of these friends crossed soon after, and the friend I relayed the story to asked my friend’s little brother how he was feeling.

“Oh, okay,” my other friend said. “I just heard about the hay bale.”

“The one that fell on you. When you were putting it in the loft.”

My friend’s little brother just stood there, confused. I jumped in.

“I was just messing with you,” I said to the friend I told the story [lie] to.

(I still carry that silence — not because I’d been caught, but because I realized what a shitty thing it was to put two friends in such an awkward position.)

I vowed that day to stop embellishing what came out of my mouth.

It was quite a struggle…

Why Do Some People Lie?

This is what last Thursday was like for me. I slept later than usual because I was up later than usual the night before — writing. I worked as a tech writer for eight hours (not an exciting job). I had lunch with my wife, and then I hung out with her after work. A wasp got into the apartment; we didn’t see where it ended up hiding. (This is still on my mind, even as we’ve moved into a new week.) I wrote some more and went to bed early.

When the most exciting event of the day is a wasp coming out of the fireplace and lurking somewhere in an apartment, it’s a pretty mundane day. But really, there’s nothing wrong with mundane; even friends who travel full time tell me that much of their days are still ordinary — just often with better scenery.

For most of us, it’s not that our days aren’t pleasant, but they aren’t constantly dramatic or exciting. So I understand the urge to make something up.

The Day I Really Stopped Lying

There is a craving in the brains of some people to run with all the possibilities the mind presents. (You can’t stop synapses from firing with willpower.)

When the brain gets a pop of satisfaction from pursuing a “what if…?” moment, I’m sure it triggers the same kinds of pleasure centers that form certain addictions. Some people crave sugary foods, some crave alcohol, and some crave embellishing stories.

The more I wrote, the more satisfied I became with who I was. Why worry so much about impressing other people? Why lie when I was becoming a more interesting person? Not every moment of every day had to be exciting when I was juggling in the street, traveling, and writing independent comic books.

But it was more than that — it was a relief. Gone was the fear of keeping all my embellishments/lies in order because with fiction — from the start — it was a given that it was all made up.

I had page after page where I could explore all the what ifs my brain craved to consider.

Here’s a truth: I know from experience that one can find shelter in lies. Life can hurt so much for some that it comes down to two options: end one’s pain for good, or shape the life you wish were real with stories when all your efforts aren’t enough. Given the choice of suicide or lies, I chose lies when I was younger.

In my father’s lies was the life he wanted to live, the person he wished he was. You knew who he was deep down through his lies much more than you knew who he was by looking at his beat-up hands from turning wrenches all day. Who my father was on the surface and who he was inside were different men.

Here’s another truth: I wish my father had been everything he was in his lies more than the bitter man he became who ended up dying at 50, when I was 22 and finally telling the truth.