You are here: Home / Books / The Book Pile: Habibi 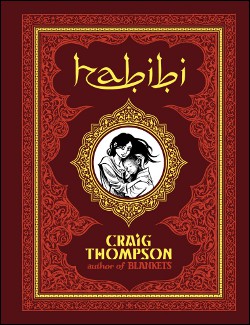 I’ll just go ahead and say it: I think Craig Thompson’s Habibi is one of the best — if not the best — examples of graphic novels as a medium.

It blurs the lines of time and place, it uses traditional comic book panels and many design elements to carry the story, and it ends in a way that is everything the book is about.

When I say graphic novel, I mean graphic novel. The only comic books I have as bulky as Thompson’s 665-page Habibi are the Daredevil Omnibuses, published by Marvel. Some people call those graphic novels, but they aren’t — they are collections.

The comic book geek in me just has to clarify that.

Habibi was created to be read as one large work — not a collection of shorter releases.

So What’s the Deal?

Habibi is the story of two slaves in the Middle East: Dodola and Zam. Despite some harsh violence and tough times for the two that some people have found unsettling, there’s still a lot of magic in the book: the ways the two characters move through time — in and out of each others lives; the locations in the book, sometimes seeming like a fantasy world based on Middle Eastern design and lore — other times harkening to the construction of modern cities like Dubai and Abu Dhabi; the way Thompson slings ink and designs panels and pages.

It’s an awe-inspiring book to hold in one’s hands, and while there are times the scenes and story seem like a bit more of the same violence and trials, good writers often put their characters through hell. I won’t spoil the ending, but I was happy for the characters, and loved the last two-page spread ending the story.

Brought a tear to me eye and a smile to my face.

Is It Really the Best Example of the Medium?

I said Habibi is one of the best — if not the best — examples of a graphic novel. I say this for a variety of reasons.

While there were some sections of dialogue that seemed forced, and even some scenes that seemed just a bit much, that happens (even in some of my favorite novels). As a whole, Habibi combines story, writing, art, and design in ways few graphic novels do.

It’s an ambitious book, and Thompson pulls it off.

There are graphic novels I’ve read that I liked more than Habibi, but none that are the shining example of the medium that Habibi is.