You are here: Home / Miscellaneous / What’s in a Title? 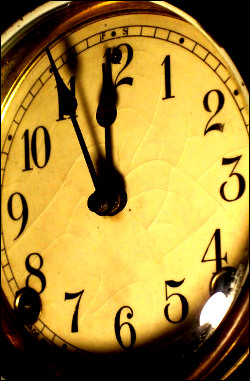 It seems fitting to begin the new year by reading a new book: Salman Rushdie’s Midnight’s Children, a book about children born at the stroke of midnight in India in August of 1947 — at the very time of the country’s independence.

Reading Rushdie’s introduction to the 25th anniversary of the book, he talks about how he wasn’t sure he could pull it off.

The book went on to win the Man Booker Prize.

Besides the fear of trying to pull off the most ambitious book he’d written to date, Rushdie obsessed over the title. He originally thought it should be named either Children of Midnight, or Midnight’s Children.

After much struggling, he settled for Midnight’s Children.

What’s In a Title?

According to the introduction of the book, once Rushdie settled on a title, things came into focus. He said:

To know the title was also to understand the book better, and after that it became easier, a little easier, to write.
– Salman Rushdie, from the introduction to the 25th anniversary of Midnight’s Children.

I’ve written about what goes into a cover before, but titles are where a book really sings. At least that initial connection. The cover can pull you in from across the room, but the title is the next step.

I can’t imagine most books I loved named anything but what they are named.

I have to admit — despite its length — I’m mighty proud of the title of my first book, Hell Comes with Wood Paneled Doors. It tells a reader all they need to know. It is, after all, a humorous book about a family traveling cross country in a possessed station wagon.

My second book, Glimpses, is a paranormal mystery set in 20s Chicago. It’s about a nice-guy detective in a tough city…a detective who gets glimpses of crime scenes when he’s left alone to focus on the places where terrible things occurred. Since writing the book, that type of character has become kind of common over the years, so I may change the character’s ability and the title of the book should I decide to dust it off and actually do something with it. (It’s the only big writing project I shelved.)

My third book, Promise, is named after the small town in Wisconsin where the book takes place. There is no real Promise, Wisconsin, but those who have read it so far — first-line readers and agents alike — feel I’ve captured a sense of place. That’s one of the best compliments I’ve received, since the town is an important part of the book.

Lately, I’ve been working on a book called A Magic Life, a story about a female magician rising to fame against the odds in the 40s and 50s. So far, what I’ve written is the writing I’ve dreamed about creating for decades.

It’s a story close to my heart; years ago, a one-legged World War I veteran asked me to help him escape from a nursing home where I worked.

How about you — what are some of your favorite titles? Did the pages between the covers hold up to the titles, or fall flat?