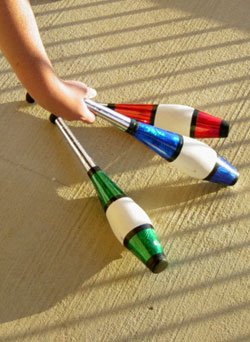 There was a period of time, during an illness with a close relative and during an illness of my own, that I didn’t write or juggle as much as I once did. I felt bad that I wasn’t productive. Even though nobody would fault me for taking care of a sick sibling for two years and later, dealing with a serious health problem of my own, all I wanted to do was juggle and write.

We all go through periods like this. When I was struggling with things and starting to come back up, I wrote the following essay. It’s about juggling, but it’s also as much about writing and life. (Maybe even more.)

If you or somebody you know is going through rough times and find it hard to do what they love doing, I hope this helps in some way:

When I was twelve years old, I went into my backyard and taught myself how to juggle.

I dropped and dropped until I figured it out.

While I’ve dropped a lot of things in my time, I’ve also picked things back up a lot, too.

Only to drop them again..

Juggling’s a strange hobby. To get good, you have to suck.

You may drop thousands of times before getting that one difficult trick that only another juggler who’s worked hard truly appreciates. Your arms may burn; you may find yourself alone as it gets dark when you finally get that one thing you want to do more than anything at that moment in your life.

Few things feel better to me than finally getting a trick down as night falls with nobody around.

It’s those moments when you realize all the effort you’ve put into something finally paid off.

It’s a humbling hobby, where failure is the norm, and obsession is your only ally.

Without all those drops, I would have never known what it felt like to do something few people will ever do.

Somewhere along the way I stopped picking up the things I dropped. It became easier to leave things on the ground than it was to pick them back up and stick with them into the night, the next day, and the days after that…sticking with them until succeeding, no matter how long it took.

When you’ve dropped something for your nth-thousandth time, sometimes the thought of getting through a pattern for a full cycle isn’t enough inspiration to keep going.

Somewhere along the way I stopped juggling.

I’ve never really thought about why I juggle — it’s just something I always did. I used to say, “Juggling is who I am”; I used to say that it was everything to me.

But it wasn’t about juggling — it was about the way I approached everything in my life.

I went into big things not afraid to drop thousands of times because I  believed that in everything I tried, as long as I obsessed correctly and picked things up and kept at it, I would one day feel the rush of its equivalent of juggling seven things.

I’ve forgotten what it feels like to juggle seven things.

I need to change that.

I’ve forgotten what it feels like knowing I can do anything I set out to do.

I need to change that.

There’s a lot of stuff I left lying on the ground over the years, and it’s time to pick it all back up and finish the things I started.

Because juggling is who I am; it is everything to me…