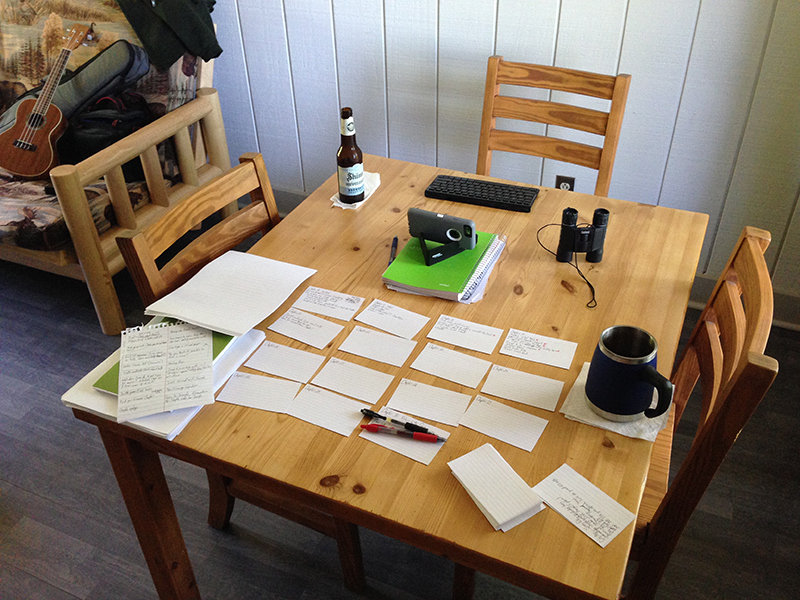 In two and a half weeks, I will be writing at a very spartan table on a very hard wooden chair. For a long weekend, I’ll be writing in silence in a cabin in East Texas, seated across from a best friend, while he does the same.

This year marks the 5th year of the annual writing retreat. (The image above is from a previous retreat at Cooper Lake State Park.)

I know for a 5th anniversary, many people might have been inclined to rent a special place for the weekend. (A place with more room and comforts.) I can assure you that there are few places better than Daingerfield State Park, though. (<——- Seriously, look at those photos in the link!) Besides, I’m used to writing in less-than-ideal places. (I actually look forward to those tables and chairs in Texas State Parks cabins.)

If you didn’t read Stephen King’s tale of his grand desk when it came out, you may have read the recent Zen Pencils version.

If you have no idea what I’m talking about, here it goes:

Like many writers, King dreamed of a massive, important desk that he’d buy when he made it big. He came to find out that desk was not all he believed it would be.

My current desk is a remnant of a vague monstrosity of a desk. It’s a small desk with a hutch attached to its surface. At one point, there were two more sides to it. There was a time that sitting down in my large U-shaped desk was like climbing into a cockpit. But the extra space seemed to serve more as storage for papers that should have been filed away and other things finding a way into the office (keys, packages, mail…stuff like that).

This is not to say things on my much smaller desk are organized. I have microphones, a desktop computer tower, and a couple other things on top the the hutch. A Behringer Multicom Pro-XL processor is tucked behind a Mackie 802 VLZ4 mixer to my left. (Podcasting gear.) To my right: storage for mail and things to be filed.

It’s not the ideal space for writing, recording podcasts, and day job work on days I’m not in the office. But it works!

I have written a lot at this desk.

I have never had the luxury of an office completely my own, but that has never stopped me from writing. Some of the first serious writing I ever did was at a tiny desk shoved in a corner of my old bedroom. I wrote much of a screenplay at a tiny desk at a past job…and most of my second novel at a small table in a cafeteria at another past job. (I’ve written quite a bit on tables in lunchrooms and breakrooms at jobs, in fact.)

My ideal office would not contain a large desk. Maybe an upgrade from the current desk to something a bit more solid and pleasing to the eye, but small works for me. Granted, an ideal office would also have a separate workspace for recording — and a stand-up table allowing me to wander more and brainstorm when tired of sitting. But for now, my office is shared space with storage and laundry…so I make do with what I have

The point of all this is it’s not all about a perfect space. It’s a nice thought — sure — and I’d not mind the ideal creative space I see in my mind when I daydream about a dedicated space for writing and recording. But it’s not vital to getting work done.

Some of the best novels even written were completed on uncomfortable chairs before tiny desks and tables. There are writers who, after finding great success in their efforts, still write at kitchen tables. Others write on the go or fill scraps of paper until they see the story before them. Hell, there are still many writers who need little more than a pencil, a yellow notepad, and their lap to get work done.

For me, there’s a strange comfort in working in spite of the ideal space.

So in two and a half weeks, I look forward to my ass falling asleep in a hardwood chair. I look forward to the tiny, but stout tables the Texas Department of Parks and Wildlife place in their cabins. (It will be a great weekend in a gem of a state park.) 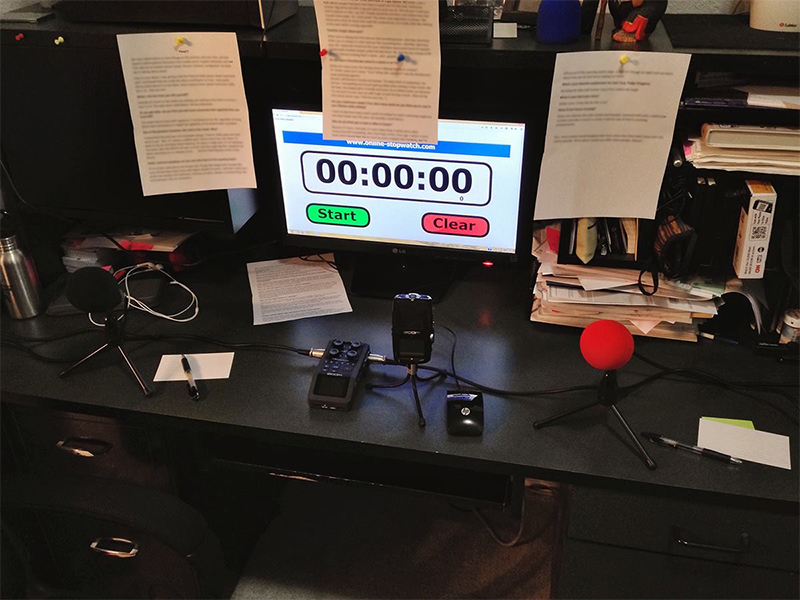