You are here: Home / Process / Finding Your Way In The Dark 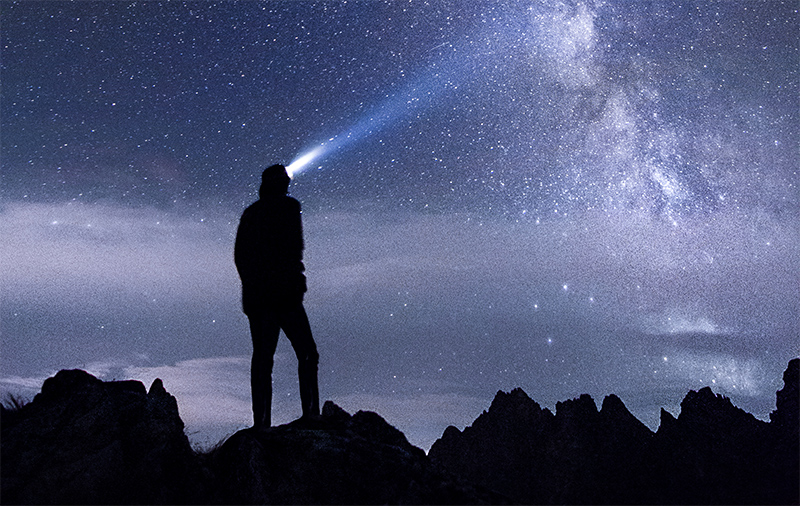 I’ve met many people who talk about the stories they want to write, but never actually write them. And why not?

Once you’ve regaled a group with your brilliant ideas fleshed out enough to something with a vague structure, the satisfaction of telling a story is there. (Why spend years writing a novel when you can bore your friends with a blow-by-blow of the book you will never write?)

Along those lines also comes the idea that needs acceptance…the idea not fully formed or even fully worked that you talk about in the hope others chime in and make building the idea into something more an easier task.

My wife has a rule: she will only read my finished work. When she does, her feedback is honest and thorough. (One of my all-time favorite bits of feedback was when she told me she didn’t like much about a story I wrote, but that she could see in the actual writing a big leap forward.) If I’m absolutely in need of feedback, she will let me talk a bit, but the majority of the time, it’s silence until the work is done.

(My wife knows what I know: that most of the time, if one tells a complete story about the work they wish to one day write, that day usually never comes. Or, at the very least [if the story is written], why would you read a story you’ve already heard about in its entirety?)

Yesterday, I stumbled upon an idea for a new Not About Lumberjacks story. I mentioned a bit about it to my wife, and she said it sounded cool. Not sure where I could run with it, I chatted about the idea a bit more. My wife was quiet…and with good reason: I’d barely come up with something new, and I was hoping she’d do the work for me and say, “What if this happened…?”

I came up with the foundation for the story, but I hoped someone else would come up with all the other details to make the story more clear.

Now, if I’m stuck with something and ask for help, my wife will say, “What about this…or that?” And there are times she comes up with ideas for stories she’d love to see me write. But even in those instances, the work is up to me.

It’s my job to find my way in the dark.

Finding Your Way in the Dark

Biologically, we’re conditioned to be still in darkness.

There is often a stage in creating any story that one feels lost in the dark. Sure, you may be like, “What if this guy found something in that book he’d been meaning to read for most of his life?” but then the issue becomes, “Well, what is that thing?” (And then more darkness until the whole story exists as a tunnel in the darkness toward a light at the end.)

I can move fairly well in our apartment at night with the lights out. Sometimes stories feel like that: familiar enough that I can get around inside them without bumping into things. But putting me into an unfamiliar space in the dark is like beginning a new story — I move slowly, seeking out the edges until I figure out where I’m going.

When the Path Becomes Clear

It’s nice having someone else lead you through darkness. But there’s a satisfaction in doing it yourself — eventually trusting that you can repeat the challenge each time it presents itself.

In the case of the story idea yesterday, my wife wasn’t ready to call to me in the dark so I had something to walk toward. I’d only just entered the dark room and not even put my hands out to feel my way around. And because I was not offered immediate help, I found my way.

I now have a clear path before me, and all I have to do is walk to the end.