You are here: Home / Ebooks / Writing for Different Mediums 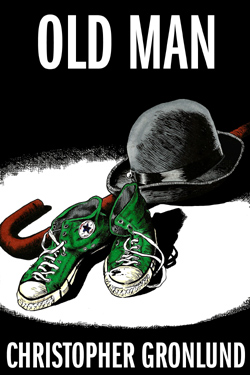 I’m glad that it made it to a novella because it allowed me to get deeper into the psychology behind the story. As a comic book pitch, I love the art that accompanied the pitch, but it’s not the story I’d tell today. The screenplay went deeper, but there’s only so much voice over/narration you can do with a script before people say, “This is a screenwriting no-no!” As a novella, I finally got to go deeper into a story I love so much.

I thought it would be cool to share the evolution of a scene in various formats: as a comic book, a screenplay, and as the novella.

Old Man is about a 16-year-old named Phil Johnson who begins acting like an old man in an effort to get to know his dying grandfather better. In the example scene, he’s camping with his grandfather and coming to the realization that growing old isn’t so bad…

I’ll always love the six pages that were created for the comic book pitch. The artwork by Tim Czarnecki, still holds up as some of my favorite work by a great friend, and I’m still proud of the writing. The problem with the comic book: at the time, graphic novels were not as common as they are today, and Old Man didn’t lend itself to a mini-series of 4-6 monthly issues. So we planned to cram the story into 48 pages, meaning there was no time to get too deep. 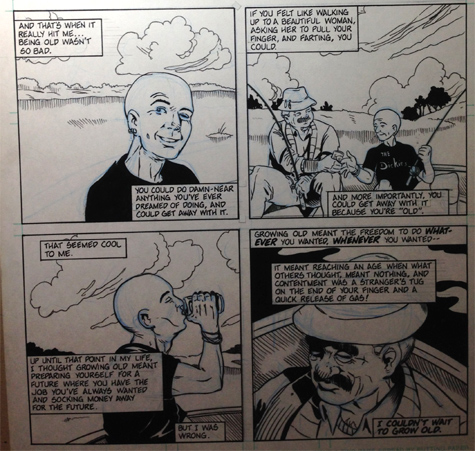 Gramps makes it to page 38 in the screenplay…a little over half an hour into the would-be movie that was considered by a major studio and later optioned by an independent director — but ultimately went nowhere.

The camping trip lasts several pages — it’s not all crammed into two pages, like the comic book pitch. But still, there’s a certain hurried pace to it all, with much of Phil’s change falling into a montage.

Gramps catches his breath while out hiking and pointing birds out to Phil.

They skip stones into the water.

I think that’s when it hit me: being old wasn’t that bad.
You could do damn-near anything you wanted and get away with it…

The novella version of Old Man allowed me to spend more time in Phil’s head, so his decision to try convincing Gramps to teach him to become an old man doesn’t seem as far-fetched and rushed. There are two camping outings in the novella: the first, not going so well; the second making all the difference to the story.

Here’s how some of the scenes not in the comic book pitch and only handled as a montage in the screenplay worked out in the novella:

That day was almost exactly like the day before, only when Gramps went into the cooler for another beer while fishing, he came out with two cans. The fish were also biting; in the process of reeling one in, I spilled my beer after only a few sips. Gramps joked that I was clearly not old enough to handle my liquor, and that was it: no more beer for me.

On our hike, while Gramps was trying to mimic the calls of a sandpiper on the beach below (he said he liked them because they reminded him of the sound one of his camera auto winders made), we saw a golden eagle. I’d never seen anything like that before. I saw it first, and pointed it out to Gramps, who told me what it was. We were high enough up on the trail, and just enough in the trees to get a great view. It turned our way and then flew along the trees above the beach. It came by so close that we could hear it cutting through the wind.

“Can reading a book make you feel like that?” Gramps said.

I didn’t make it to the tent that night; I slept beside the fire ring, warmed by the coals. I would have probably kept sleeping had Gramps not started the fire back up to make breakfast. I had stayed up late, thinking about what Gramps had said. All the things that scared me—things like tests and what people thought about me—were nothing when compared to taking a side full of shrapnel from a mortar. That’s not to say that my concerns about things weren’t valid, but Gramps’s story made me think about how I let things get to me that I probably shouldn’t have let get to me. I sat up and rubbed the sleep from my eyes.

“Good morning, sunshine!” Gramps said. “Slow riser, eh? I’ve got something to get you going.”

He extended his finger to me. “Pull my finger!”

Without thinking, I did—and Gramps let loose with a fart so loud, I’m surprised birds didn’t scatter from the treetops! Gramps grinned and I laughed. That’s all it took for the two of us to end up hysterical, holding our guts laughing and struggling for air. Finally, Gramps regained his composure and handed me a cup of coffee. I took a sip.

“Yep! Put hair on your chest. You’ll need it, we have a big day ahead.”

He wasn’t kidding. We went fishing again, and I didn’t even mind the times the fish weren’t biting. Hell, I even wore the fishing hat without being asked! We hiked through the woods; I was surprised that Gramps was able to make it up some of the bigger hills along the coast. Sure, he was winded at the top of some of the steeper climbs, but so was I. He seemed to know what every bird we saw was, and did a good job mimicking their calls. Back at camp near the lake, we skipped stones and chatted while looking out over the water, watching all the fish that weren’t biting earlier taunt us with their jumping.

As I helped Gramps cook dinner, it hit me: being old wasn’t so bad. You could do damn-near anything you wanted and get away with it. Up until that point in my life, I thought growing older meant getting a decent job and preparing yourself for a secure retirement like Mom and Dad talked about. But I was wrong. Growing old meant the freedom to do whatever you wanted, whenever you wanted. It meant reaching an age when what others thought meant nothing and contentment was a stranger’s tug on the end of your finger and a quick release of gas!

So that’s it, a peek at how Old Man differed, depending on format.

As a comic book and screenplay, Phil got to drink beer; in the novella, he spills it. In the comic book pitch, there’s no hiking or other outings — just fishing. In the screenplay, much of the weekend is reflected in a montage. In the novella, there’s a deeper glimpse into where Phil’s mind is at and how he comes to the conclusion of wanting Gramps to ultimately teach him how to be an Old Man.

It works best as a novella, but each version of the story has its own charm and strengths relying on the medium in which they were created.