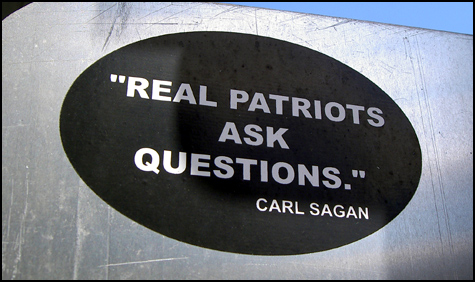 My great grandfather on my mom’s side came over from the Calabria region of Italy. (The toe of the boot about to kick Sicily — where my great grandmother came from.)

My great grandfather was one of those solid guys who let his actions speak for him. He owned a butcher shop/corner grocery store in Chicago. He worked hard, and didn’t ask for a thing in life. This was a trait he passed down to my mother.

She tells a story about how my great grandfather wouldn’t let her go trick or treating, because he thought it was begging. He didn’t understand why people would dress up and go door-to-door expecting a handout. I look back on the time after my parents divorced and wonder how my mom made it, and I’m sure some of it was that same pride in never asking for help — even when it was needed.

She just toughed it out and made due…

There is something to toughing it out…to a point. It’s easy for some to ask for help at the very first snag in doing something. I think there’s something to be gained in pushing oneself and seeing what you’re capable of doing — some people do give up too easy. I suppose, in my own way, the same pride my grandfather had that was passed down to my mother ended up in me. I feel weird asking for things, but not so much out of pride — more like I’m imposing.

The funny thing: if a friend asks me for something, I’ll give them what they need without a second thought if I’m able to help. And I know my friends would do the same for me…yet even when I’ve had friends offer to help with passing along my writing to publishers or things like that, I’ve passed on the offer. And…I’d never think about asking for help — mostly out of fear that one might think my intentions in becoming friends wasn’t genuine.

Why Do We Feel Weird?

It’s strange: most of us would do anything to help the people we care about — we even know the people we’d help would reciprocate, but there are some of us who feel weird asking for help. Whether it’s pride or fear of coming off as fake or something else…for many people, it feels wrong to ask for help. It’s not a matter of pride in my case — I think that kind of pride isn’t really pride, but more a kind of stubbornness. At the same time, my apprehension about asking for help is just as silly as that stout wall of pride.

Over on the Men in Gorilla Suits podcast, we recently chatted about the ability to create and distribute creative work in ways we never dreamed of decades ago. We chatted about a lot of people doing their own thing — and the day after the podcast, did a blog entry containing the links. During the podcast, I talked about how I feel weird promoting what I’m doing, but how I’ll do all I can to promote the people I like.

I have no qualms telling people to pick up Alex George’s A Good American, or check out John Picacio’s art. Martin Thomas (Leon) isn’t the only cool thing about Spill.com, and more than a couple friends and acquaintances have something to do with Apes of Wrath. I’m glad John Lucas is penciling a bigass book and slinging his own inks! CMStewart is looking for someone wanting to work on a short online video project, and Paul Lamb keeps placing writing in publications.

If any of these people asked for help, I’d help them any way I could. In John Picacio’s case, he did ask some people for help when he started doing his own thing. And everybody who knows him was more than glad to do what they could to spread the word about what he was up to.

The Power of Asking

I’m not one to need inspiration in order to work — I write because I like writing and know that if I waited to be inspired to write, I’d rarely write. That doesn’t mean that inspiration isn’t out there and appreciated when it comes along. In the past week or so, I’ve seen a couple things about the power of asking for things. Not in an arrogant way…just asking from the heart and the results that can come with having the courage to swallow your stubborn pride or goofy fears and ask for help.

Not saying I’ll get better about asking for help, but it’s something to consider…

Some have claimed the video below is a set up, but…the kid mentions playing with Billy Joel’s old sax player from way back, and if you’re trying to stage something, it doesn’t seem like a thing you’d do. If anything, it seems like the guy’s way of establishing credibility for what he’s about to ask of Billy Joel.

And this is just a neat version of a song I like that at least partially helped me take a couple big steps toward overcoming shyness. I can’t say I’ll ever be the life of a party, or even chat with people I don’t know at a party at great length (although it’s happened), but I’ve definitely found that the best way to overcoming shyness (for me) is facing it head on. Maybe asking for help is like that, too.