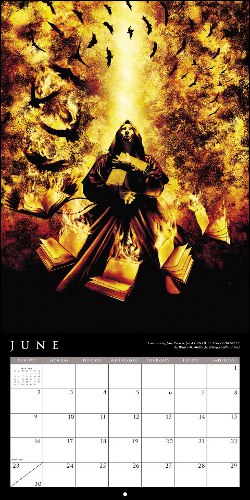 The small handful of people who have signed up are loyal and cherished, but I have always felt strange about hitting people up to see if they’d like my occasional messages and information. It tends to be a seasonal thing instead of monthly, as intended.

I know I need to be better about managing my email newsletter.

I’ve mentioned John Picacio on The Juggling Writer before. Nice guy; great artist…I think the only thing he can’t do is teleport (and I wouldn’t be surprised if I were wrong about that). In addition to painting book covers and winning awards, John’s started his own side art endeavor called Lone Boy.

John’s first release is a 2013 calendar featuring some of his favorite paintings. Shortly before the launch of Lone Boy, John put together a newsletter to let people know when his Kickstarter project for the calendar went live. John’s newsletter helped him meet his goal of $12,000 in just 5 days. With 6 days left, he’s about $2,700 shy of $20,000. (At $20K, John’s going to put together a sketchbook for backers, so if the calendar looks cool and you’re interested in backing the project, you may get a signed sketchbook, too.)

So what was the big thing John did to beef up his newsletter?

He simply asked for permission.

When I attend tech conferences, it never fails: someone who asked me for a business card ends up putting me on their email mailing list without my permission. More times than not, it’s not even a list having anything to do with my interests. It’s a crappy way to do business.

When John put his newsletter together, he asked people if they’d mind being on the list. He didn’t just send a form letter to people he asked; he took time to say hi to the people he sent email to and catch up with those he knows. In my case, I’d have signed up for John’s updates even if he hadn’t emailed to see how things were going and saying, “Hey, I’ve got something planned — do you mind if I put you on my mailing list?”

But it was nice that he asked.

John made it clear that newsletters and updates wouldn’t be a constant thing. Most people I know already get more email than they want, to the point that even the things they want to see feel like they’re flooding their inboxes.

By not flooding people with updates, people are more likely to open his newsletter to see what’s up.

The final thing John does to make his newsletter matter is sharing images and information before he shares things with his social media feeds. It’s the place to get news about what he’s doing before others.

It’s easy to just cut and paste content from blog entries or other things you’re sharing, but…your fans are going to see that information anyway. Cut-and-paste newsletters feel like just another place to cross-post the same content fans may have already seen 2-3 times.

By reserving his newsletter for bigger things, John’s fans are much more likely to open what he sends.

Taking My Own Advice

So…now that I’ve looked at what John’s done to help his mailing list, I plan to use some of my time off over the Thanksgiving break to focus a bit more on my mailing list. If you’re interested in finding out what I’m up to before it’s posted on The Juggling Writer, you can sign up for my newsletter here.

And if you want to learn more about John’s Kickstarter project, check out the video below: