You are here: Home / video / Better Writing Through Birdemic 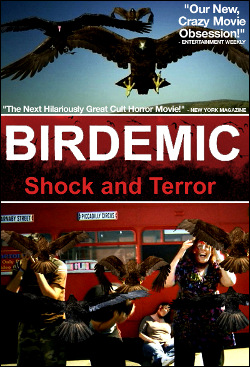 Last Thursday, I finally saw Birdemic (the RiffTrax Live event). It was a blast; I was hoarse for a couple days from laughing so hard.

Somewhere into the opening credits, which drag on and on and on and on, it hit me: people can learn some writing lessons from watching this movie mocked by the RiffTrax crew (or by watching old episodes of Mystery Science Theater 3000).

The things they make fun of are the things writers shouldn’t do.

I mentioned the opening credits of Birdemic. The way they dragged on, it was like the anti hook, a terrible way to establish that the director really doesn’t understand the importance of pulling in the viewer from the start.

The lack of pacing in the beginning (and throughout the movie) becomes even more apparent with the RiffTrax crew calling out just how long things drag on.

It goes on even longer than this. And then, throughout the movie, there are so many more driving scenes as filler.

Don’t destroy your story with pacing that drags on and on like a legless zombie.

The dialog in Birdemic is terrible to the point of jarring. It’s so bad, it doesn’t even need to be called out by the RiffTrax crew. Don’t believe me — watch the trailer!

I’m not one who believes every bit of what’s on a page must always drive the story forward, but dialog should flow naturally and generally serve a purpose.

I’d say “Spoiler Alert” but really, with Birdemic, you know what you’re getting all along, down to knowing things like continuity will be ignored.

At one point, the protagonists are robbed. A reserve of gasoline is taken from them. The moment I saw the scene, I knew there would be a scene (or two) showing the gasoline container back in the minivan.

Most movies, and even some novels, have tiny continuity errors, but they are usually not as jarring as a disappearing/reappearing large, red container of gasoline.

For all the schlock, Birdemic is written with a goal in mind: to make people think about global warming.

It’s good to have a purpose behind the things we write, but every few scenes in the movie, a moral lesson is forced into the story. Even if the scenes were well written, they’d make even the most sympathetic audience shout, “Okay, enough already — we get it!”

Some of my favorite novels make a point about social issues, but they do it without flogging the issue.

For the sake of not spoiling the ending of Birdemic, I won’t post a video clip…all I’ll say is this: it’s ridiculous. Characters who worked so hard to survive don’t affect the ending. And…the final scene drags on like the opening.

In something like Birdemic, that’s the payoff I want, because the whole thing better be terrible once it’s established how bad things are. But I’ve read many a novel where what seems like the ending isn’t the ending. Things go on and on, and the payoff is deflated. Outside forces end things instead of the characters in the book.

Watch Birdemic, and don’t repeat the mistakes it makes from beginning to end.

If, for some reason, you want to see some really bad acting, check out this clip:

And if you want to see how action packed Birdemic is, check this out: