You are here: Home / Inspiration / You’re Not the Only One 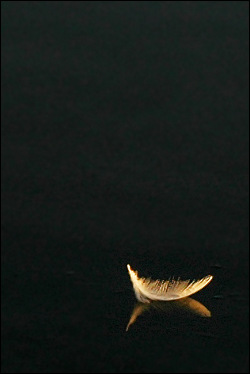 This might be my favorite thing I’ve read in a couple weeks, an essay by Emily St. John Mandel about the work that goes into writing, and how — in its own way — that work is reward enough for all those hours spent in solitude.

It’s not just the glimpse into the life of a working writer with a day job, like this line:

“By five thirty a.m. I was on a flight to the next city. This was the Midwestern tour: five cities in five days, condensed in such a manner so that I’d only have to take three days off from my day job.”

It’s also about the love of the work, as described here:

This is why I travel so hard, why I work seven days a week, why I write in the subway, why I usually close myself in my office on weekends instead of seeing my friends.

Most of us who write can relate — at least to the effort that goes into writing when one also has a day job. I’ve been very busy with my day job the past month or so. Now that a big project is done, I’m taking this weekend to catch up on all the email and other writing-related things that have fallen to the side. I am skipping a conference I was looking forward to because this is the first weekend in a month that I have totally to myself. I’ll probably see no friends this weekend.

Still, through the busy time, recently, I made time to write.

Because writing matters to me.

Given the choice between writing as well as I can and promoting that writing, I’d rather write. And I do like promotion.

In recent years, I’ve gone back to caring more about the work of writing than the work of promoting; in part, because — if you’ve followed this blog — you know I’ve grown a bit tired of social media overload. So it’s no surprise that I liked this line from Emily’s essay:

“I know a lot of writers, which means there are days when my social media feeds are clogged with relentless self-promotion. Everyone’s written a book, and everyone wants you to buy it.

This is a delicate point, because we do need to sell our books. Selling books is how we make our living, or at least part of our living. But there are days when I wish we could all just take a deep breath in the midst of all the hustle and remember what matters, because my personal opinion is that what matters the most is the work, not the sales numbers.”

I know it doesn’t have to be an either/or thing — that there are so many options from which to choose. But to make the point that I put being the best writer I can be above making a living writing fiction, I take striving for my best. (Obviously, I hope there’s a day when “my best” is recognized enough that I can at least make a bit more than I currently make writing fiction. If that never happens, though, I’m content just writing.

Above all, what matters is good writing. Before promotion, before anything; the writing we do should be the best we can make it — even if we’re just writing for the money.

The Place Where the Writers Work

My favorite part of this essay are the last three paragraphs (specifically, the last five sentences). Emily discusses a Facebook update Cheryl Strayed recently wrote. (Cheryl Strayed has recently been dubbed an overnight success for her memoir, Wild, even though her success wasn’t such a quick thing.) The last two lines of that Facebook update:

“There is a strong and vibrant literary culture that exists and thrives in this nation and it does not exist in a place called nowhere, whether you know about it or not. It’s the place where the writers work.”

“I liked this Facebook status a great deal. I love writing, and love working in solitude for long hours. But it brightens my working days and evenings further sometimes to think of all the other writers in our separate rooms, all of us trying to create something lasting in the place where the writers work.”

We Are Not Alone In This

That place where the writers work — I like that thought as much as Emily St. John Mandel liked Strayed’s Facebook update.

Sometimes I wake up in the middle of the night and get out of bed to write. The apartment is quiet; it’s one of my favorite times because it’s just the story and me. But…that’s not entirely true…

If it’s a weekend and I’m up at 3 in the morning writing for a couple hours, chances are Paul Lamb is up, too. Shawn Kupfer and CM Stewart might be up, too. Lisa Eckstein might be staying up late on the west coast to write. Writers in other countries are up and doing their thing in solitude; only that’s not entirely true.

While it’s physically just the work and me at 3 a.m., I’m never alone. I find that comforting, knowing that all across the planet, people are working on something most don’t have to do, but do because they enjoy it or because they hope it becomes what they one day do to pay the bills. It’s like being a member of a secret society, all of us alone where we work, but not really alone.

At any given moment — as I write these very words — all over the world, other writers are doing the same thing: working in solitude in an attempt to be the best they can be.

Knowing that, even on those days I may not feel like writing, it makes putting in the time to write well a little bit easier.