You are here: Home / authors / The Book Pile: Identity, by Mark Hosack 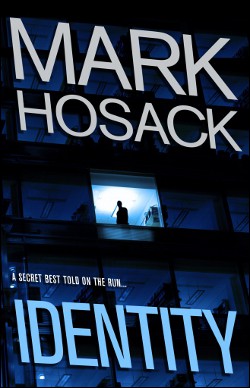 I preface this review by saying two things: 1) I am friends with Mark Hosack and 2) This review is based on an advanced reading copy — not what you can buy right here. (On special, even!)

But back to the advanced reader copy thing…this review is based on that. For all I know, in the cleanup of the book, they changed the nail-biter of an ending to a song-and-dance number…on roller skates! Really, though — I doubt that’s the case…even though if anyone could pull a roller-skating musical ending in a novel, it would be Mark.

So there is my disclaimer.

Paul Majors is a normal guy with a normal job…until he finds out the company he works for has been fudging their numbers…big time! Torn between blowing the news wide open or addressing it with the CEO of the company, Paul opts to chat with the guy in charge. The big boss is in Chicago…and Paul’s been brought from the home office in Oklahoma City to Chicago (that’s how normal Paul is — he lives in OKC!), so it’s no biggie, right? Except…the CEO is speaking at a seminar that Paul has not been invited to.

Now, you might say, “Why wouldn’t Paul just blow the story wide open if he’s such a normal guy?”

A company man, Paul’s worked for SunSoft, a division of Chase Systems, for years — and he takes his position seriously. More than that, he cares about the people who work for him. Were the company’s cooking of the books to become public knowledge, it would leave many without a job. At the very least, before going to authorities, Paul wants to see if there’s an honest way to rectify the wrongs the company has done.

And that’s when the suspense creeps in.

Arriving late to the seminar where the CEO of Chase Systems  is speaking, and not having an invitation, Paul does his one shady act in the book: he grabs a random badge at the registration table so he can get in.

Anybody who’s anybody would have picked up their badge by now, so…Paul figures it’s no biggie. Zip in, chat with the CEO, and head out — leaving the badge where he found it in case the guy arrives the next day.

Little does Paul know he just picked up Joe Carter’s badge. Who’s Joe Carter? That’s what everybody wants to know. All that’s known about Joe is that he manages a lot of money and chooses to do it from behind the scenes. It quickly becomes apparent to Paul that Joe is wanted by the kinds of people you don’t want looking for you. Toss in a woman named Ellie De Luca, who helps Paul get out of a jam; throw in a chase through the streets of Chicago ending in a death, and all a reader can do — just like Paul — is hang on for the ride!

I won’t go into too much more of the plot other than to say the story shifts from Chicago to LA…and ultimately San Francisco where all hell breaks loose!

Another confession: I read Identity faster than I intended. I had a lot going on at the time Mark sent the advanced reading copy my way, but I had to at least take a peek. That led to me being up much later that night than planned, reading away.

It’s that kind of book — one you have a hard time putting down. There are moments when I thought, “There’s no way Paul can get out of this,” and I kept turning pages to see what happened.

It’s hard not to cheer for Paul…or keep turning pages to see what happens next.

My Thing About Thrillers…

My issue: there’s usually a point where I think, “Why don’t they just go to the police, go to the media, or just…go home?”

I’ve read more than a handful of novels where there’s not been good motivation for a character to do the things they do. Sure, if it’s a spy novel or something…that’s reason enough — spies live in a dangerous world and don’t just walk away. But when it comes to normal-guy-in-over-his-head stories, it’s often really as simple as just walking away for the character, leaving me as a reader a bit flat when they don’t walk away from what they don’t want to be doing.

The times I thought, “Just walk away!” while reading Identity, the answer was always evident: Paul is a nice guy.

I don’t want to give too much away, but there are noble reasons he sticks with it to the end. And…because Paul is a nice guy, you want to see him succeed. When it looks like he won’t succeed, the suspense genuinely made me concerned for Paul…and my curiosity kept me turning pages to see how he got away.

I respect that Mark wrote a thriller for the times without being heavy handed. One can easily see Identity as a glimpse behind the world of big banking and how the 1% cut deals that have the ability to affect large groups of people. But Mark leaves what a reader wants to see on that front up to them; he’s not out to make a statement.

Mark’s simply written a fun story that just so happens to be about backroom deals and the efforts some will go through to keep what they have. Mark takes his writing seriously, but doesn’t take himself seriously, as evidenced by this promotional video where he calls Goldman Sachs to ask a question about investment banking.

In Paul Majors, Mark’s created a character we can all root for. Seeing how it all ended was definitely worth staying up until 4 in the morning, turning pages.

You can buy Identity for Kindle here. If you have a Nook, buy it here.

Need an e-reader? Mark’s giving one away. (Your choice between a Kindle or a Nook touchscreen reader.)

A guest blog Mark did today at Books R Us in which he talks about being gagged and bound to a merry-go-round moments before taking a knife to the heart. Seriously!

A Juggling Writer interview I did with Mark.

Let’s Get Mark [Singing] On Rollerskates!

Up top, I joked about Identity ending with a song-and-dance number on roller skates. If you’ve seen Mark’s first promo video for Identity, or even his last (or maybe his interview with himself), you know he has a good sense of humor. I would love to see a video of Mark on roller skates, singing some tune. What tune that is, I don’t know — what song would YOU like to see Mark sing while on roller skates?

If we pester him enough, he just might do it…

And that would be even better than the fistfuls of cash he gave me to say his book is good!

(Oh, I wasn’t supposed to disclose that?! You all heard nothing! NOTHING!!!)