You are here: Home / Miscellaneous / The Effort of It All 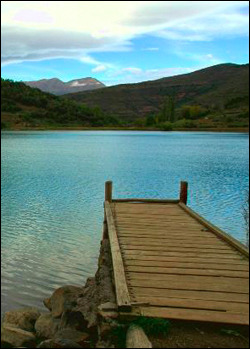 When the effort involved in getting people to know your writing exists becomes almost as much as the writing itself (or more), is it really worth it?

What have we lost when we constantly update Facebook and Twitter at every free moment instead of sitting or standing in silence, thinking?

Is productivity killing your creativity?

It’s easy to convince yourself all those updates matter — and for a small handful they do. But most writers I’ve asked admit they do it because they feel its expected of them, that their “platform” matters just as much as their writing. Really, though, isn’t your time better spent thinking about stories and writing them — not making noise in a desperate attempt to bring attention to what you’re doing?

Silence is something; it’s quite a powerful something if you allow it to be.

The Little Cabin in the Woods

I have an online writing friend named Paul Lamb. I like Paul’s blog, and I like Paul’s writing because there’s a sense of quiet thought that comes through in the things he does. He doesn’t stagnate, but he’s also in no hurry to crank out stories because it’s expected of him.

Sometimes, instead of writing on the weekends early in the morning when he prefers to write, Paul goes to his little cabin in the woods and thinks. No electricity, and no distractions — just a guy and his brain hanging out in the woods…

This quiet that Paul isn’t afraid to lose himself in shows in his writing; there’s a classic feel even in his more fantastic stories. I’ll go as far as saying that Paul’s the kind of old-school writer whose books I’d want on a shelf — not just on my Kindle. I have to believe at least a big part of why I feel the way I feel about Paul’s writing comes from the sense of calm confidence that comes from him spending time just thinking.

A Place to Think

Paul has his little cabin in the woods; I have my couch and my car. There are few things I like more than a quiet Saturday afternoon, when all the cleaning and other things are done and my wife is busy doing other things. I may take a favorite book from a shelf and read a passage…and then lose myself in thoughts. Just lying on my back, staring at the ceiling, and thinking.

More times than not when I drive to and from work, the radio is silent. No chatter of DJs or random music; no CD playing the music I actually want to hear. I take the long way to and from work because it allows me some time on back roads free of traffic. It’s peaceful; it’s a time to think.

I also think while waiting in line. Now, I love my smart phone, but…I don’t always turn it on and see what’s up in the world at every free moment. I can’t imagine how my writing would sound if I were afraid to spend moments just being silent. When I read the writing of people who can’t spend a moment without doing something, it shows in their writing — and not in a good way. It’s like cheap chocolate: it looks appealing enough, but tastes like…something I don’t want in my mouth anymore than I don’t want hurried words in my head!

I’ve thought about not submitting things ever again and just offering everything on my website for free.

There’s something freeing in the thought of writing for the sake of writing — no distractions and feeling like I have to do something because that’s just the way we do things now. No tension because something doesn’t make as much money as the last thing, or fall short of my hopes for something new.

In those little thought sessions, I’ve gone as far as considering not just putting my stuff out there for free, but releasing all claim to the rights.

“You want to turn that story into a movie and not pay me — fine!”

And I’ve also thought about writing stories just for a select few, or no one at all…just writing something that will sit until I’m gone.

But here’s the thing: I like the effort — at least aspects of the effort.

The Effort of It All

I may not always go the traditional route, but I like the thought of my stories being things people can read if they desire. I really don’t care about “platform” and what sells on formula; I don’t care that blogging/SEO “experts” say, “Keep it under 500 words!” when blogging. (Maybe I lose some people with longer posts, but I’ll take the interaction I have with the regulars, here, over 25,000 hurried people ready to jump when I say so.) With few exceptions, blogs following that formula reek of a certain desperation because if they don’t write daily (or several times a day), no money is made. A large percentage of their content is throwaway content spilling from hurried minds.

Sitting alone for hours with just one’s thoughts and doing the best they can as a writer is an effort that’s more than worth it to me. Maybe that’s the best it will ever get for me; if so, I’m fine with that. I’d rather write the best books I can and share them with a handful of people who appreciate them, than spend almost as much time screaming into the void in the hope of creating my “platform.”

Because really, the best platform is a damn good book! Not something hurried — something that comes from quiet reflection and effort.

There’s a lot of power in silence.