You are here: Home / authors / The Book Pile: The Getaway Car 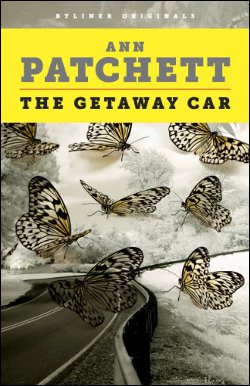 I’ve never been the biggest fan of memoirs about writing, but when I read this post on Alex George’s blog about Ann Patchett’s The Getaway Car: A Practical Memoir About Writing and Life (Kindle Single)

(affiliate link), and saw that it’s less than $3, I decided to pick it up.

(affiliate link) …well, I can’t tell you why I loved it so much — only that I did.

And I loved The Getaway Car, too.

While many new writers daydream about making it big, Patchett mentions she went into writing thinking that success came only after death — so she was prepared to just get by doing what she loved. She’d wait tables and not have children or want for more because, as long as she lived a simple life, she could write without stress.

All she wanted was to be a happy writer — not a rich writer…and it didn’t take much to make her happy.

From the start, she lived a life where writing came before climbing the corporate ladder or other trappings that often pull people away from the dream of making it writing. She worked a job that allowed her to think about stories, and not about work.

Maybe we can’t all live as lean a life as Patchett did in the beginning, but as one who’s turned down several offers of becoming a manager because I know it would take even more time from what I’d rather be doing, there really is something to living on enough to get by and keeping at the dream of writing, instead of striving for even more material things.

(I freely admit that all the lawyers-turned-writers and doctors-turned-writers destroys this theory, but Patchett’s point is really about sacrifice, and in reading interviews with those who did balance a career and writing, they usually sacrificed sleep for writing.)

I admire the honesty in The Getaway Car. Patchett dislikes parties because it’s where people come up to her and say annoying things like, “Everyone has at least one good novel in them,” and then ask her to write that novel for them. She talks about the struggle to remain kind to those who make it seem like all that’s needed to make it writing is to one day sit down for a month or two and write and BOOM! you’ll make it!

To this point, Patchett says:

“Why is it that we understand that playing the cello will require work, but we relegate writing to the magic of inspiration?” … “If a person of any age picked up the cello for the first time and said, ‘I’ll be playing in Carnegie Hall next month!’ you would pity her delusion…”

Art Does Not Just Happen

Some may find the first part of The Getaway Car a bit harsh. Some people believe writing’s all about inspiration — that by dabbling in being creative, one day they will write a book. Patchett isn’t scolding those kinds of people; she’s just telling them that writing is hard work.

“Art stands on the shoulders of craft, which means that to get to the art, you must master the craft.”

Most people who want to write at some point in their lives aren’t willing to put in the time to master the craft. They want the story that’s in their head to magically flow to the pages. (Another thing Patchett talks about quite a bit, in beautiful detail, in the first part of the memoir — the reason there are butterflies on the cover of the e-book.)

I love this quote because I wanted the third novel I’ve written to be my first, but at the time, I knew I hadn’t mastered the craft of writing. So I wrote my first novel, and then a second that only exists on a hard drive. It took me 20 years to get to the point of feeling confident enough to pull off my last novel, and to tackle what I’m working on, now.

Other Gems from the Memoir

Regarding how what’s often in one’s head is often not what ends up on the page.

(She wraps that section up with a quote from a writing student in a group she once addressed; one of the moments in the book that made me laugh out loud.)

On the effort of writing, assuming that everybody does, in fact, have at least one good novel in them (which Patchett does not believe, but offers to make this point):

“Only a few of us are going to be willing to break our own hearts by trading in the living beauty of imagination for the stark disappointment of words.”

“While I’ve had long periods of time when I’ve written every day, it’s nothing I’m slavish about.” … “I’ve gone for months without writing and never missed it.”

Then there’s this — again dispelling the myth of the magical side of writing:

“No matter what you may have heard, the characters don’t write their own story.”

“I do a great deal of tinkering, but I never make any structural changes…”

“I try to conduct my research after I’ve started writing, or sometimes even after I’ve finished.” … “I hate to see a novel in which the author has clearly researched every last detail to death and, to prove it, forces the reader to slog through two pages describing the candlesticks that were made in Salem in 1792.”

The $2.99 e-book is worth it for the last three sentences that sum up writing better than anything I may have ever read. It’s like paying a dollar a sentence for some of the best advice out there. (Or you can go read Alex George’s blog about the memoir — he reveals the last three lines at the end of it.)

If you truly live it and understand the sentiment in those last three lines, you know writing.

Who Should Read This?

The Getaway Car is something I wouldn’t recommend to somebody just starting out…or hell, maybe I would.

The things Patchett says might be ignored by many new writers, much like the part of the book that made me laugh out loud. At the same time, when I was still very new to writing and I looked to people with experience and heard them say, “It’s not easy, and it’s rare to see the first big thing you write meet with success,” I took it to heart.

I had a blast writing my first novel, and it has some moments I’m proud of in between all the goofiness. But had I written my last novel first — as I originally wanted to do — I’d have made a wreck of a good thing. So if you’re a new writer, and patient, The Getaway Car may be for you.

Patchett’s memoir seems to work best for people who have written for awhile. While almost blunt, at times, it’s not cruel. Those who have been writing awhile will appreciate her honesty.

It’s a memoir for people who know how hard writing can be, but still choose to do it because they also know writing’s rewards.