You are here: Home / authors / Interview with Shawn Kupfer 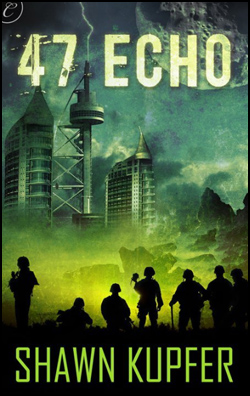 I first heard of Shawn Kupfer when his book, 47 Echo, was reviewed on The Nerdist blog.

Shawn doesn’t write about small worlds, though. 47 Echo brings readers into the not-too-distant-future where convicts serve as the do-anything troops in a war against China fought in old Cold War territory: Russia. Not totally sci-fi, and not totally a military story, it’s probably best to let Shawn describe the book.

Shawn, please tell us what 47 Echo is about.

Basically, it’s the year 2019. The United States is in a war with the People’s Republic of China, the Democratic Republic of Korea, and about half of the Russian military, and it’s not going well. To bolster the front-line troops, Congress has passed the Convict Conscript Act, emptying out the prisons and putting everyone serving time into convict units. The worst offenders — multiple murderers — are placed in Marine Echo units, like the titular 47 Echo.

How did you come up with the idea for 47 Echo?

It was a bunch of different statistics that came together. I started looking at numbers — I have a bit of a number obsession — and I realized that China has a standing army of 5 million. They have compulsory military service in China, but it’s not been enforced, because there are so many volunteers. Then I came across an infographic that showed what each country in the world was the world leader in — for North Korea, it was percentage of their population that were soldiers (13 million active troops), and for America, it was the percentage of the population in prison (more than 2 million). All of those numbers came together and started planting the seeds for what would become 47 Echo in my head.

I kind of put the proverbial chicken before the egg in leading with the book. Can you tell us who you are and how you came to be a writer?

Sure! I’m just a guy… 33 years old, currently stationed in the Dallas-Fort Worth Metroplex. I was writing stories ever since I can remember — for a fourth-grade “write a short story” assignment, where other kids turned in a sheet of notebook paper, I turned in a typed, bound, miniature novel with characters, research, and illustration. I’ve kind of been doing that ever since, with a few noticeable gaps here and there.

To be quite honest, it’s the freedom to do and say anything I want. I get to create my own little worlds, populate them with people of my own creation, and watch the results unfold. I’ve often said I entertain the hell out of myself, and if other people dig it, that’s a great thing. But first and foremost, it gives my brain something productive to do, and it’s a lot of fun.

Those times when you want to write, but can’t. Most writers I know work day jobs to keep the proverbial wolves from eating their way through the door, and I’m no different. Most writers I know also would love to do nothing but write for a living, and there’s that disconnect where you wish you were working on your own projects, but you’re stuck in an office working on someone else’s stuff for eight to ten hours every day.

Back to 47 Echo. You do a great job balancing military lingo without losing the reader in a flood of acronyms. Do you have a military background, or consult with anybody to keep things accurate?

A bit of both. I grew up an Air Force brat, the son of an meteorologist who eventually went into Special Operations. Then, in my early 30s, I worked as a contractor for the Department of Defense. And though I was born into it, I do keep current with a few friends in the Army and Marine Corps. A lot of the slang in 47 Echo, for example, comes from a Marine pal who’s deployed at the moment — the Army Rangers talk like Army Rangers because I have two friends who served in the 75th Ranger Regiment.

An oddball question. The new Muppet movie comes out next week. Who would you rather fight: Animal armed with a straight razor, or Fozzie the Bear with a shotgun?

That’s no contest. Fozzie with a shotgun. Going up against Animal with a straight razor is only slightly better than facing down a mental patient wrapped in barbed wire — there’s no way to defend against either one. But Fozzie doesn’t strike me as someone who went to the firing range a bunch, and his aim is probably pretty poor. Also, you can reason with Fozzie. There is no reasoning with Animal.

You’re quite prolific, having written eight book length stories in the last two and a half years. What’s your secret for staying productive?

Simply, keep writing. Even if you don’t “feel like it,” even if you think you’re putting absolute crap onto the page — just keep going. Keep producing. Set a goal every day, and don’t give yourself any excuses not to hit it. Stay up late if you have to. Bow out of the movie you really want to go see. Writing is a job — a fun job, but a job — and if you treat it as such, then your productivity stays where you need it to be.

So is it safe to say you don’t believe in writer’s block?

I don’t really anymore. Or, when I come up against it, I just force myself to push through it — I know I can fix any mistakes in editing later. Of course, there was an almost decade-long stretch before I started the Twitter Novel Project in 2009 where I completed almost nothing… so I figure I got all of my writer’s block out of the way already.

With your output, how attached are you to the things you write?

Interesting question — I *like* everything I write, otherwise I wouldn’t have written it… but I’m not one of those writers who thinks “my words are my children!” Ask my editors — I’m pretty easy to work with on that score. They want to change something, sure. Makes sense to me. If someone wanted to do a spinoff or adaptation of one of my works, I’d be interested in the result, not hyper-protective of the source material… because the thing I wrote is always there, always its own thing.

Low-budget films. I love them, even when they turn out to be train wrecks. I’m pretty forgiving of low-budget and indie stuff, and I can usually find something I like about every film I watch. And I watch a lot of ’em.

A little bit more about 47 Echo. While the main character, Nick, has a past, he’s a nice and fair guy (as long as you don’t mess with him). What led you to creating Nick?

Nick’s a character who, though he’s guilty of the crimes that caused him to be sentenced to 47 Echo, believes in right. He didn’t fight his conviction, because convicting him, in his mind, was right. He’s a character that fits perfectly into the world of the novel, being half Chinese and half white (English extraction, specifically). He’s a full-fledged American, having grown up in Southern California, but people take one look at him and see the enemy. And though he’s subjected to racial discrimination (until they need his fluency in Mandarin Chinese, of course), he still does what’s right. All of these factors kind of combined in my head to create the perfect character to fit into the time and place of the book.

Dreaming big for a moment, here, let’s pretend a big studio decides to make a 47 Echo movie. Who would you want to see in the role of Nick?

That’s a tough one, as there aren’t a great many Asian leading men of about the right age. Of course, saying that, I came across a comedian called Steve Byrne (funny guy, definitely check him out), who could probably pull it off and do a stellar job with it. He’s half Korean and half Irish, so he looks close to the part (I’m not one of those people who thinks “Any Asian! Good! Throw him in there,” but it’s been very tough to find a half-Chinese, half-English actor).

How about a director for the movie?

I’d love to see Joe Carnahan take a crack at it. I’ve enjoyed his films for a while now — I even enjoyed the “A-Team” reboot he helmed. He can handle action well, and I dig the hell out of his visual style.

A random question: can you tell us a couple of your favorite books?

Oh, man, there are tons. Anything by Douglas Coupland. “Portrait of the Artist as a Young Man” by James Joyce. “House of Leaves” by Mark Z. Danielewski. “The Right Stuff” by Tom Wolfe. “The Great Gatsby” by F. Scott Fitzgerald. “Black Hawk Down” and “Killing Pablo” by Mark Bowden. I also dig a lot of true crime and military history, though that’s not a shock to anyone.

As per usual, bunches of stuff. The third 47 Echo book, a couple of collaborations with other authors, and the book that’s been following me around for a couple of years now, *Blunt Force Trauma,* which is about violence addiction.

How many books do you have planned for Nick and the 47 Echo world?

As many as they let me tell. I could pretty much go on forever with those guys — the war lasts longer than a decade, and my original plan was at least one book taking place in each year of the war.

Yes. Keep at it. Keep going, keep putting words on the page — some of it might be crap. A lot of it might be. But keep working, and honing your craft. The story you really want to tell is out there just waiting for you. Don’t give up until you get there. Then, once you get there… keep going.

Thanks for your time, Shawn. Before wrapping this up, anything you’d like to say before leaving?

Thanks so much for having me! Um, as I walk out the door, I probably should shill for a second and mention that the second 47 Echo novel will be out in June 2012, or thereabouts… so keep an eye out. 😉

Pick up 47 Echo on the Kindle, here, or get it on the Nook right here.