You are here: Home / Miscellaneous / Wading through by Writing 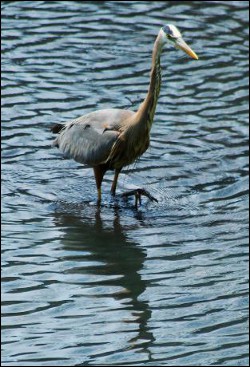 It was “official” Wednesday afternoon: the project I’ve been working on at my day job since May finally wrapped up.

I’m lucky–I have a day job that normally requires no overtime. I work with cool people and get to work from home half the time. I write enough procedures that I’m always busy, but rarely am I slammed with work. On this recent project, I was slammed with work. I worked my normal hours, after dinner, and right before bed. I worked weekends.

I’ve worked longer hours at other jobs (although I don’t think I’ll ever beat my 128-hour workweek), but this was the first time I was constantly on call.

Some people I worked with felt the stress.Wading through a big project didn’t bother me much, though; after all, I write novels!

The Effect of Writing on Work

If I’ve learned nothing else from writing, I’ve learned to be patient with a big project. I’ve learned that just because you think you’re done, it doesn’t mean it’s over. (Many times, that’s when the real work just begins.) I’ve learned that the best you can often do is put your head down and keep working…you will eventually get there.

Even when I haven’t worked as a technical writer, the writing I do away from work has conditioned me to not let a big project weigh too much on my mind, no matter what job I’m doing.

When I write a novel, I can’t look at it and tell you when I’ll be done. I can guess, and probably come close to my guess, but I’ve found that it’s best to work as hard as I can until I’m done.

With work, I have the same approach. I can estimate timelines, sit through meetings, and do so many other things. But the best thing to do is shut up and work!

I’ve always liked herons. I’ve always admired their patience. With so many things going on around them, they patiently do their thing and keep trudging along. Give them the ability to type and they’d be good writers, I’m sure.

I mentioned above some of the reasons I consider myself lucky to have my current job. One of the things I love on the days I work in the office is my view: I have a window seat looking over a small lake where several herons live. There’s a lot to learn from a graceful animal that spends its time wading through water and doing its thing–just as there’s a lot to learn by wading through a project as big as completing a novel.

You just do it until it’s done, and then you keep your focus and do it again and again.

Writing big things makes everything you do just a little bit easier, don’t you think?