You are here: Home / Ebooks / A Benefit of eBook Technology 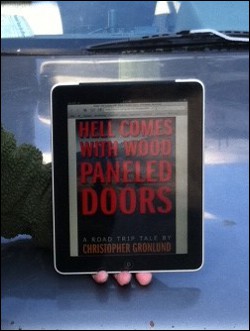 When I completed my first novel, Hell Comes With Wood Paneled Doors, I obviously hoped it would be published by a traditional publisher. I finished it in the early 2000s, and it was met with the typical rejection I seem to get:

“I liked this, but it’s a bit too quirky and I don’t know how I’d market it.”

Still, when I had dreams of Hell Comes With Wood Paneled Doors on bookshelves, I had an even bigger dream: that people would take the book with them on road trips and take photos holding it in front of all kinds of road side attractions. A stranger holding something I wrote in front of the Grand Canyon, Cadillac Ranch, or a giant ball of twine would have made me just as happy as having the book published; in some ways, maybe even a little more.

Technology is a Wonderful Thing

By releasing Hell Comes With Wood Paneled Doors as an ebook, obviously that dream of people holding my physical book while on vacation won’t happen. But there are benefits to ebooks that go beyond picking something up off the shelf in a bookstore.

A good friend vacations in Alaska every year; he and his family are up there right now.

On the day I released Hell Comes With Wood Paneled Doors as an ebook, I received a text message from my friend, letting me know that he bought it.

In the middle of nowhere.

“No running water, no toilets, but 3G (upgrade from Edge last year…).”

So maybe it’s not a physical book that is being dragged all over the country–and the mighty Isuzu Rodeo isn’t an actual station wagon–but somebody who’s spending two weeks in a camp in Alaska with no running water or toilets was able to tap some buttons on his iPad and buy my book!