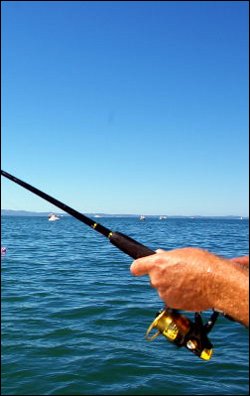 On a walk last night, I thought about how I didn’t start writing seriously until I was 20.

I always enjoyed writing, but it wasn’t something I thought I’d do when I was younger. (I thought I’d be an artist, a wildlife biologist, or a juggler.)

As I walked along, I thought about the earliest memories I have of writing, and that led to me thinking about my earliest memory showing some of the character traits that define the way I approach writing.

I came up with this:

When I was five or so, my mom and grandfather took me to a forest preserve to let me run around and go fishing.

There was a small, stone wall dam on one of the ponds. I decided that would be a good spot to fish.

I saw bluegills in the water; I was eager to start catching them. I used bread for bait. I could see the fish, but couldn’t catch them. Each time I lowered the hook, it was swarmed by bluegills stealing the bread.

I squeezed the bread harder before putting it on the hook so it would be harder for the fish to steal and started catching little fish. I saw a bigger bluegill and decided I wouldn’t stop until I caught it.

The bigger bluegill probably got bigger because it was smarter than the other fish. It was down a little deeper. By the time the hook reached the fish, the smaller bluegills had pecked at the bread, making it easy for the bigger bluegill to take it off the hook without being caught.

After many rounds of this, I calmly said, “That little bastard,” and went right back to trying.

My mom overheard me call the fish a little bastard and said, “Chris, what did you just say?”

My mom went on to explain that while there were worse words than bastard, it wasn’t a word a kid should use. So I thought about what a little bastard the fish was, until finally catching it.

I didn’t just walk up to the shoreline and start fishing — I scoped out the pond, determining the best place to be was on the tiny dam at the far side.

In writing, don’t always go with what’s closest (i.e. easiest). It’s important to assess each step in where we want to go and work at getting ourselves into the best spot we can to succeed.

I could see the fish, but couldn’t catch them.

There are many close calls along the way when you take writing seriously, and it’s frustrating when they break the line and get away. The important thing to remember: there are still a lot of fish down there; sometimes, the one that got away comes back to your hook.

I squeezed the bait onto the hook a bit tighter and started catching fish.

Sometimes it’s important to pack the bait on a little tighter, changing our approach, and seeing what happens. It’s great to think big — that the first novel you write will sell — but the reality is most writers catch some smaller assignments along the way, preparing them for the big catch.

I was persistent and finally caught the little bastard…then, promptly released the fish.

Just because you finally catch the big fish, it doesn’t mean your job is done. Maybe you’ll land a writing deal worthy of mounting on the wall, but at some point — in some way — you have to release it and move on to the next catch.

J.D. Salinger and Harper Lee may have landed records that sustained them for life, but most of us will only catch a few biggies that are worth displaying. Most of what we catch will only sustain us for a couple meals — We starve if we don’t keep fishing.

What moment or moments from your past define you as a writer (or other profession)?

Feel free to discuss them in the comments.

Have a great weekend, everybody — I Hope you all get plenty of time to write!