You are here: Home / Books / What’s Worse than Piracy? 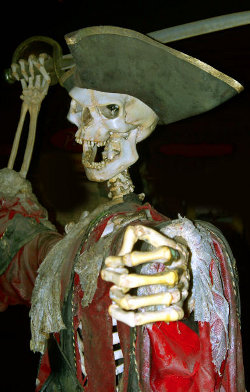 “Obscurity is a far greater threat to authors and creative artists than piracy.”
– Tim O’Reilly

Tim O’Reilly’s quote (often attributed to Cory Doctorow), has always rung true with me. Not that I like the thought of people taking and trading an artist’s work for free, but if people are sharing your work illegally, it’s likely that your work is good enough to make money.

In the music industry, the people who share the most music are also the people more likely to buy music, attend concerts, and buy the shirt to prove they were there. (This works for books, too: when people share books with me and I like them, I’m more likely to buy the author’s next book.)

With e-books becoming more accepted, it’s easy to be smug, angry, and even worried about the piracy of content. But anybody who has ever recorded an album to a cassette tape back in the day has committed piracy. And just like with books or file sharing, if I liked what I heard, I was more likely to buy it.

Please don’t think I’m saying I’m all for piracy, but as somebody who recorded albums I didn’t buy from friends as a teenager, I can’t be high and mighty about piracy.

And I can’t stop it.

If you put me up against 1000 people in a fight, I would hurt a couple people, but I’d lose. If I healed and went back at the 1000 people, I’d lose again. Sure, I could convince myself that I’m chipping away at my 1000 enemies, but what if their ranks continued to grow? What if the 2-3 people I hurt each battle were replaced by 20 or 30 more people?

I’d be a fool to keep attacking them day after day.

It’s a battle that I could never win, even though I’d be well within my rights to fight as hard as I can…even though them attacking me is wrong.

Now imagine if that group of 1000, instead of attacking me, told their friends how much they loved my writing. Instead of a handful of people reading my writing, maybe I’d find an armful of fans. And as word spreads, I’m more likely to gain a following and find people actually willing to pay for what I do.

Again, I’m not saying it’s right, but as somebody who probably still has old cassettes recorded from friends’ music collections, I can’t point any fingers.

“You don’t have to burn books to destroy a culture. Just get people to stop reading them.”
– Ray Bradbury

For all the talk of piracy destroying the industry and how to stop it, there’s something far worse that every writer faces: competition with other media!

Television, the Internet, and movies satisfy the urge to have stories told to us more efficiently than books. With videogames, we can actually take part in the stories.

It’s much easier to come home after an 8-12 hour day and have a story told to us by the television than it is to make the effort to read a book. In one-and-a-half to three  hours, a movie tells the same story that may take a week (or longer) to get through as a novel.

Maybe there really will come a day when enough people don’t read for pleasure and the industry crumbles to nothing. It would be a sad day, but just like fighting 1000 pirates, it’s a battle I wouldn’t be able to win.

The best I can do is change with the times, try to find ways to share my love of reading with others in the hope that people keep reading, and keep doing what’s right for me: writing the best stories I can tell, whether people read them or not…