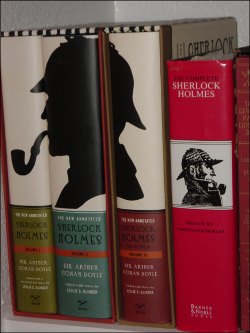 My wife and I saw the new Sherlock Holmes movie today.

I haven’t read all of the Sherlock Holmes stories and novels like my wife has, but I’ve read enough to have cringed when the movie was first announced.

Oh, sure, the boxing scenes he directed in Snatch are wonderful, but I envisioned Holmes with explosions and plenty of fisticuffs.

And that’s definitely what movie goers get in this movie.

But they also get an analytical Holmes whose brain drives him mad when he’s not on a case…just like in the stories.

Holmes’ addictions aren’t spotlighted, but they don’t need to be; most fans know about his addictions, and they are definitely alluded to.

Granted, Doyle didn’t write Holmes and Watson as back-to-back battlers, but Holmes is a practitioner of martial arts in the stories, so it’s not too much of a stretch to make him a good fighter. (And even during the fights in the movie, his analytic side rules over knuckles and brawn. The Dubliners’ “Rocky Road to Dublin” during the fight didn’t hurt, either!)

Watson isn’t a bumbling idiot like he’s often portrayed in film and TV adaptations of Doyle’s stories; the tension over Watson’s fiancée is there, too.

So many of the quirks and traits in the stories and novels are there.

So far, almost everybody I’ve heard from about the movie — including those on a LiveJournal Holmes group — have enjoyed the movie, too.

This is why I think that’s cool:

Driving home after the movie, my wife and I chatted about how great it would be if the Sherlock Holmes movie gets people reading and rereading the stories.

Even if the movie were horrible, if it gets kids, teens, and adults reading Doyle’s cherished stories, how bad is that?

When a book is made into a TV show or movie, there’s always the fear that it’s not going to live up to the book. When it’s a classic, like the Sherlock Holmes stories, fans become even more worried.

Hollywood has definitely ruined a lot of great books and characters, but Sherlock Holmes holds its own and and pays respect to one of the most loved characters in fiction.