You are here: Home / Miscellaneous / The Business of English 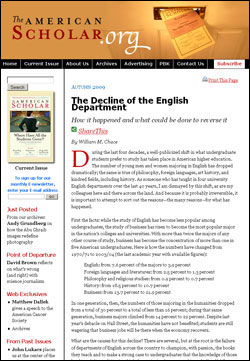 The American Scholar has a great article about the decline of English studies in colleges in its autumn issue.

The article shows that while there’s been a decline in people studying English [and other liberal arts classes], there has been a significant rise in students studying business.

Murphy isn’t the only person to talk about publishing becoming more corporate — I’ve read other people in the industry discussing people with business degrees coming in and changing things. While publishing has always been slow to change, it’s an industry that has traditionally been based on the passion and love of the written word — even at the higher levels in publishing houses.

Now, it’s become an industry that wants success right away, without supporting authors like it once did. Agents have been forced to become editors, doing all they can to produce books that people with business degrees can throw at the wall to see what sticks and kick what falls to the floor aside.

But it’s not all bad.

Authors have seen the power in building relationships through social networking (taking business into their hands). New marketers (many without business degrees) who understand the importance of making genuine connections are stepping in and showing companies that they can do a lot more with much less than the cost of their advertising campaign. While things have changed, there’s still a lot of passion and love for the industry, and the people making connections are making connections [at least in large part] by writing.

As somebody who studied English in college, it’s disheartening to me that studying English is on the decline, but I know that one doesn’t need to be an English major to write well.  Sure, each month it seems like there’s another article about people reading less, but I don’t attribute it to fewer English majors out there. (Most people who read weren’t English majors, after all.)

And people are still reading. It’s hard to determine the reading habits of teenagers and young adults because they are getting their content in different ways many business-minded people haven’t yet figured out how to measure. While some chain stores may be posting losses, overall reading has been on the rise in recent years. People may not be studying English, but they are reading and writing more than ever.

Granted, we lose something with the decline of English majors. Drunken 20 and 30-year-olds quoting obscure literary passages at parties may become a thing of the past, but it’s clear that the ability to read and write well still matters. Even in business.

Maybe the English majors are still out there, but instead of hanging out in coffee houses talking about the novels they’ll write when they graduate and travel Europe, they’re actually writing and figuring out new ways of doing business, instead. Perhaps they’re even enrolling in business schools with the intent of entering publishing through a different door.

That wouldn’t be such a bad thing.