You are here: Home / authors / Social Networking and the Power of Free 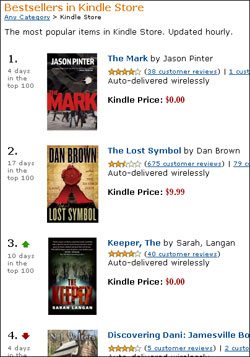 Earlier this week, Jason Pinter announced that he was giving his book, THE MARK, away for free as an e-book. I’ve been reading more books on my iTouch, using the Kindle app. I’d planned to read THE MARK, so I downloaded the e-book and have it for when I’m ready to read it.

I stumbled upon Jason Pinter while doing a search for authors who looked interesting to follow on Twitter. While I typically don’t read mysteries and thrillers, following Jason’s tweets and reading his blog piqued my interest. I plan to read THE MARK after getting through some other books.

One of those books is Chris Anderson’s FREE. (It was a free download when I got it.)

When Cory Doctorow released DOWN AND OUT IN THE MAGIC KINGDOM for free, I talked about it with friends and family. Some people thought it was a bad move, but I was fascinated to see what happened. And what happened? Well, people know Cory Doctorow’s books, now, and from everything I’ve read, he’s a very happy and successful writer. In large part, he made it by giving something away for free — a plan that many said wouldn’t work!

I use Facebook to stay in touch with friends I have sat down with and actually know. I also have a Twitter account, but a lot of my friends don’t like Twitter. In fact, I have some friends who say they can’t stand Twitter…and for their uses, I can see why they prefer Facebook. When I chat with some of these friends, they say Twitter is just noise; that it serves no purpose.

I’m guessing I would have eventually seen Jason Pinter’s books at some point, but I wouldn’t have known his name right now without Twitter. And while I planned to buy THE MARK, it would have been lower on my reading list than it is now because it was accessible and free. I’ve peeked at it and it’s safe to say that I’ll be buying his other books.

Generosity and social interaction of any sort go a long way with me. And it seems to be working for some people. Granted, the Amazon Kindle Bestseller List is not the New York Times Bestseller List, but through word of mouth and the power of free, a book that’s been around a while unseated Dan Brown’s new book for the #1 spot…and has for days since Pinter announced on Twitter, Facebook, and other places that he was giving THE MARK away for free.

If you doubt the power of social networking and free, consider this: it very well may have created a new Jason Pinter fan out of somebody who normally doesn’t pick up the kinds of books he writes.

I’m sure I’m not the only one…