You are here: Home / Inspiration / My Pursuit of Silence 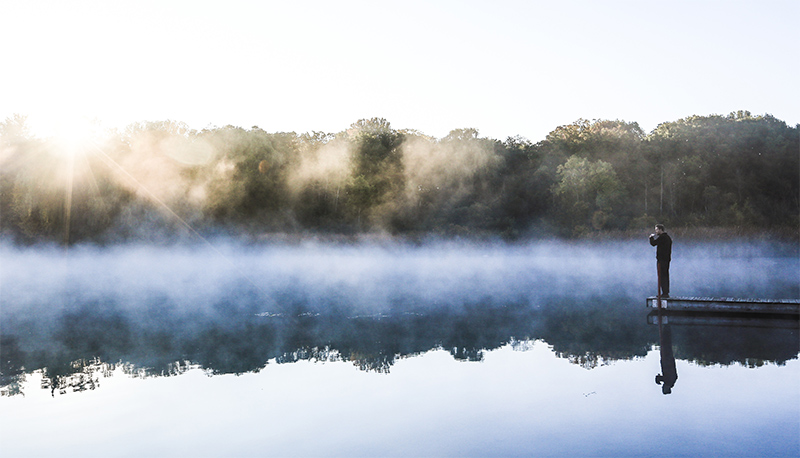 Over the weekend, I finally got around to watching In Pursuit of Silence. (It was something I backed on Kickstarter, and I’m happy to see it getting attention.)

If you follow this blog with any regularity, you know I have a strong appreciation for solitude and silence. So on a quiet Saturday evening, I sat down and watched In Pursuit of Silence.

I’ve grown beyond the time when a book, documentary, or movie could change my life, but there are still things that leave me in awe and thinking about who I am and my place in the world.

In Pursuit of Silence is one of those things.

What Have We Lost?

What I liked most about the documentary is not that it says, “We must exist in silence,” but rather: “Stillness matters.”

Even in the quietest places, there is sound — even if the only sounds you hear are your nervous system and vascular system in an anechoic chamber. We are wired to be aware of stillness and the small things that interrupt it. From a primitive stance, we are created to be in tune with our surroundings; to hear that distant snap of a branch that can warn us of danger or alert us to a potential meal.

In a subtle way, we have blinded and deafened ourselves by the rush and noise of an industrial life. We are not encouraged to go off on our own; many people have a hard time just sitting still for a couple minutes. We reach for our phones like a smoker reaching for that first cigarette of the day.

Have We Lost Anything?

Obviously, a documentary like In Pursuit of Silence plays to something I seek. It would be easy for me to simply let it all wash over me in a huge tide of, “Exactly! This is what I’m talking about!” But even stepping back, I think its argument is well made.

Children in loud classrooms don’t learn as well as those in areas that aren’t as loud. Unless there’s something like a bear around, sitting in the woods and relaxing lowers one’s stress, while the rush of a place like New York City elevates it — even if it’s not noticed.

Of course, one could easily make this argument:

Sure, I may lose a couple years on my entire life from the underlying stress of it all, but in my time I have lived and seen great things by living in the city. There are sad people in silent places who never really live at all.

It’s a valid argument. I know people who love all that huge cities offer. It would be wrong to say, “Because this other way of living is my preference, your thing is bad.”

But there is still evidence that it can be an overload. Many of the people I know who love a fast-paced life are also the people who complain most about how they never have time and feel the effects of stress.

While I find I write best when life is slow and silent, I cannot deny some of the best fiction has come out of New York City, Chicago, and other huge cities.

At one point in the documentary, someone says:

Silence is the resting place of everything essential.

I’m quite fond of that thought. We recharge in the silence of sleep — and those who have a hard time sleeping are often those people thinking about all they didn’t do during the day (and all that waits tomorrow). When people are worn down by exhaustion, stillness is how they recoup.

I’d be reluctant to say that silence is the place for all essential things, though, because I believe there are things important to many people that are loud and busy. (Rugby matches, loud bands, and even fast cars.)

But healing often occurs in still places, and while great novels have been written in big cities, just as many (perhaps even more?) were produced in solitude.

During one section of In Pursuit of Silence, a Zen practitioner says this about silence:

It’s not like you are just being silent and do nothing.

This is one of my struggles: craving a still mind and silence while doing more things I enjoy.

In a recent talk I gave about podcasting fiction, I mentioned that I used to work in a warehouse where running machines and building things with my hands was muscle memory. I spent much of the day not thinking about anything at all. When I was thinking, it was usually about writing.

It was a time in my life when I was able to go home after 8-10 hours in a hot warehouse and knock out a complete draft of a short story or novel in an evening. These days, writing is much more of an effort because my mind is not as still.

At work, there is a barrage of email, instant messages, and people stopping by my desk when I turn those things off. There are days when new projects come marching in, never allowing me to focus on any one thing. Sometimes at home, my mind still sorts these tasks…because there was definitely no time at work to do it. Sometimes I work in the evening just to avoid falling behind.

All this does have a great effect on the writing I most prefer doing. To say it doesn’t would be lying.

In Pursuit of Silence is not a documentary solely about silence — it is a documentary about stillness and seeking natural levels of noise. It never goes as far as saying modern life and technology is bad…or that we’d all do well to quit our busy lives and return to our primitive roots.

And I think that’s the beauty of the documentary: that acknowledgement that many of us don’t want to join a monastery or take a vow of silence and walk across America…but that we can benefit from quiet spaces.

One of the quiet moments in the documentary takes place in a New York City bar called The Burp Castle. It is a bar in one of the busiest cities in the world that eschews TVs and music and encourages patrons to speak in hushed tones. With a decibel level of 39 at the time of recording in the bar, that’s roughly 20 dB less than the room I’m in right now. (And I find the room I’m in right now to be a soothing space, with only the sound of the air conditioner and a fan.)

The point is not about silence, but instead: finding restorative moments of peace every day.

I mentioned earlier that with age, few things leave me so impressed to suddenly make big changes in my life. Those who know me know that a documentary like In Pursuit of Silence plays to the way I already look at the world (and the things I seek). So while the documentary didn’t change me, it made me think more than most things I encounter. These are some of the thoughts that came to me during and after watching:

IN PURSUIT OF SILENCE Teaser from transcendental media on Vimeo.