You are here: Home / authors / A Matter of Interpretation 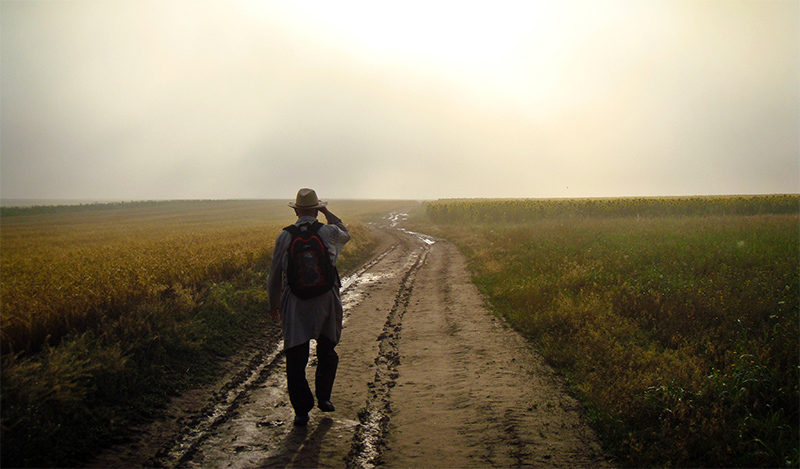 When Robert Frost’s poem “The Road Not Taken” was taught to me, it was as though only the last three lines existed:

Two roads diverged in a wood, and I—
I took the one less traveled by,
And that has made all the difference.

Out of context, it looks like it’s a poem about enjoying the quiet path. But a full reading of the poem reveals that the roads are equally worn and that, in the end when telling the tale of the split, it will be said with a sigh.

Two roads diverged in a yellow wood,
And sorry I could not travel both
>And be one traveler, long I stood
And looked down one as far as I could
To where it bent in the undergrowth;

Then took the other, as just as fair,
And having perhaps the better claim,
Because it was grassy and wanted wear;
Though as for that the passing there
Had worn them really about the same,

And both that morning equally lay
In leaves no step had trodden black.
Oh, I kept the first for another day!
Yet knowing how way leads on to way,
I doubted if I should ever come back.

I shall be telling this with a sigh
Somewhere ages and ages hence:
Two roads diverged in a wood, and I—
I took the one less traveled by,
And that has made all the difference.

As an adult I read the poem and was hit with a profound thought: “This is a poem about someone who has a hard time deciding and always looks back in regret.” A couple years after that and reading all I could about the poem, I wrote this old Livejournal entry.

The poem has been on my mind, lately. I’ve seen it popping up in the past week and eventually realized this book has been written about the poem, arguing that it’s not what many believe it to be. (Obviously, I agree that it’s not a happy poem — that it goes as far as showing humans will paint a past event in a happier hue to assuage their regret and wondering.)

I chatted about this all with some friends online yesterday, some of whom reread Frost’s poem and were floored when they saw and agreed that it is not the happy poem we were told it to be when we were younger. Others may have thought we read into things too much. One friend felt that things left up to interpretation matter on the level readers want things to matter, and I’m apt to side with him. (He also dropped this in his defense of where he stands on it all):

One of my favorite poems is “Piazza Di Spagna, Early Morning” by Richard Wilbur. It goes like this:

I can’t forget
How she stood at the top of that long marble stair
Amazed, and then with a sleepy pirouette
Went dancing slowly down to the fountain-quieted square;

Nothing upon her face
But some impersonal loneliness,- not then a girl
But as it were a reverie of the place,
A called-for falling glide and whirl;

As when a leaf, petal, or thin chip
Is drawn to the falls of a pool and, circling a moment above it,
Rides on over the lip-
Perfectly beautiful, perfectly ignorant of it.

When I stumbled upon it in my early 20s, the line about things being drawn to the falls made me think, “Did she fall? Did she jump?”

I reread the poem a couple months ago and thought, “Ya know, maybe this isn’t about anything I thought it was about when I was younger. Maybe it’s just a poem about watching a woman descend stairs in a piazza in Italy…”

I did some research and found out that was the case — no suicide or accident involved at all.

So…does that mean my earlier impression is wrong and that those who see a message about taking things slowly in Frost’s famous poem are also wrong?

Sometimes we know exactly what an author meant when writing something. Journals are found and we can say without a doubt:

The evidence backs up this particular interpretation…

But writing becomes the realm of readers once it’s in their hands. Without readers making something more than it was at creation, writers would have no hope of ever being read to a level allowing them to be one of the rarest of the rare who not only do it full time, but full time without another thought of money again.

So if I say my intention with my first novel is symbolically about the hell my grandfathers experienced in World War II, but readers say, “It’s a humorous coming-of-age story about a family traveling cross country in a possessed station wagon…CLEARLY!!!” who’s interpretation wins?

Does it even matter?

(For the Record, Hell Comes with Wood Paneled Doors is really just a dream a sentient marmoset has before realizing she just wants to stay wild because human life seems much too difficult. You know that’s true because the author said so in this blog post!)

The Road Not Taken

I think I can make a better argument that Frost’s “The Road Not Taken” is a poem about regret…or at least not letting past decisions in life stand on their own. That it’s about the people who will always wonder:

Had I walked that other road, would it have been better?

and then work hard to tell themselves they made the right choice.

But if someone else sees the happy interpretation of the poem, or carries away from a reading a memory of childhood and argues that it’s even deeper…that it’s all about growing old enough to make decisions and sighing as we look back because we’re no longer children free to play, who am I to say you’re wrong?

I suppose even that’s up for interpretation.