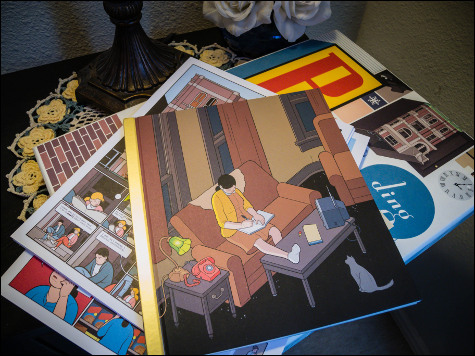 I first became aware of Ware when he was doing stuff for the Daily Texan at the University of Texas in Austin.  Not that I went there, but some of the stuff he did was published in some Texas indie comics in the early 90s. His little potato guy strips were too cool.

After that, my wife and I picked up all the Acme Novelty Library stuff he did, up until that last few. (I think the last one I read was #17, so I was at least familiar with the beginnings of Building Stories he was tinkering with in #16 or #17.) One of the things Ware became known for with Acme Novelty Library books were the various sizes in which they were published. (Oversized books; tiny books.) I must confess to liking when Ware hit his stride with smaller books, but since we’d already been dealing with his over-sized comics, I figured why not buy his big box of stories about a building and the people who live inside?

When you read enough of anything — over time — you occasionally stumble upon creators from the start and get to see them grow over time. I consider myself lucky for stumbling upon a cartoonist who often leaves me feeling just as floored as my favorite novelists.

Building Stories is a big box containing 14 books, pamphlets, fold-outs, and other printed matter telling the story of a building in Chicago and the people who live there. When asked what book one should start with, Chris Ware said it doesn’t matter — he set out to create a work that can be started by grabbing anything in the box and reading.

I’m sure that’s true, but I must admit: I’m glad I went to the book that reminded me of a Little Golden Book in a way.

Maybe I was just really in the mood for it, or maybe it really is that good, but the first page of that particular book from the box is so well done — on so many levels — that if you presented somebody with Ware’s quirky little potato guy comic strips and that page, they would want to read all he did in between just to see how he got from there to here.

It’s a beautiful page in how understated and just…Chris Ware it is.

Acme Novelty Library #5 was the first thing Ware did that made me go from, “Cool! Chris Ware stuff,” to “Wow…he’s really done something special, here, and if this is the way he’s going with things…we’re all very lucky.”

In that one page alone, it’s clear: we’re all very lucky.