You are here: Home / authors / The Death of Books 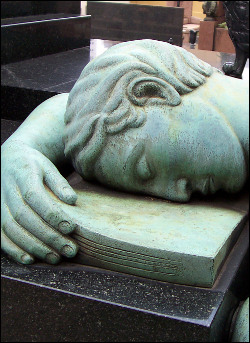 Nobody reads anymore, so why bother writing?

By the time 2015 rolls around, publishing will be dead!

Why in the world would anyone open a bookstore these days?!

I’ve heard all this (and more) said about the industry. Being a realist, I know things aren’t the way they once were. I can even see where these people are coming from, even though I see it more like this:

The percentage of e-books to physical books sold is growing, but stories are still selling.

Teen readership is way up, and there are still plenty of adult readers. (And even if there weren’t, I’d still write because I enjoy it.)

When 2015 rolls around, publishing will have changed, but people will still be reading.

As far as opening a bookstore, it’s like any business: some stores become part of the community; others don’t. Many people I know who scoff at the thought of others opening a store don’t seem to do much of anything except telling others how their efforts will fail. Say it enough, and you’re bound to be right once in a while.

Few books in recent years fascinated me as much as Ann Patchett’s Bel Canto. It’s not a book I hold as high as my absolute favorites, but in many ways, it’s a book that has stayed in my head longer than some faves. In addition to writing books, Patchett sells them.

If you’re interested in books, I recommend reading this article and checking out the video below. It’s about going against the odds and doing something out of love.

A Matter of Specialization

It’s easy to say, “Well of course Parnassus Books is successful — having a best-selling author as a partner in the bookstore doesn’t hurt.” There’s truth in saying that.

But what gets me about Parnassus Books is that they don’t try to be everything to everybody. They’re selling the books they believe in. Many independent bookstores I’ve seen (that are no longer around) try to be Barnes and Noble Light, stocking a little of this and a little of that with no specialization. With that model, they can’t stock as much as the two-level Barnes and Noble a couple towns over. If all I hear as a client is, “…but we can order that for you,” I can do that through Amazon and not have to make another trip to a shop that never has what I’m looking for.

A smaller store that specializes in what I like, though…I can get behind that.

It’s Who You Know

Getting to know the staff and knowing who likes the kinds of books I like goes a long way to getting me to come through the door on a regular basis. I will never have that kind of relationship with Amazon. A good example of what I’m talking about is a comic book store that used to be in the area. I knew the staff, and the staff knew me.

When Bone hit issue 6, the shop put up a display. I asked one of the people who worked at the store what they thought of the book. They loved it. That’s all I needed to hear in order to buy all six issues because we had similar tastes. What happened next surprised me: I was told, “Take one of each and read them. If you like them, pay me next week. If not, as long as you return them in good shape, no worries.”

I don’t expect that kind of service wherever I go, but it’s the kind of thing that kept me driving past four closer stores each week to get my comic books there.

But Books Are Dead!

Still, to many, none of that matters because it’s clear the book is a dying thing. People are quick to point this out to readers, writers, and booksellers; even Patchett mentions the reactions when she first considered being a partner in a bookstore:

“Anyone I mentioned this plan to was quick to remind me that books were dead, that in two years—I have no idea where ‘two years’ came from, but that number was consistently thrown at me—books would no longer exist, much less bookstores, and that I might as well be selling eight-track tapes and typewriters.”

I’m not the blind optimist who believes that just because I love books, they will always be around. I do, however, feel confident saying that even 25 years down the line, even if stories are hardwired into our brains in a flash, there will still be those who sit down with books. I also feel confident saying there won’t be nearly as many people buying physical books as there are now, but there will always be those who seek out old things from slower times…and a need for those dealing in the product.

I don’t think the future will look like Blade Runner, but if it does, I’m confident that in all the rush and neon of future Los Angeles, there will be a quiet little store nestled between all the tall, glass buildings — and in that store…shelves full of old books just waiting to be discovered again.