You are here: Home / social media / Closing the Door to Distractions 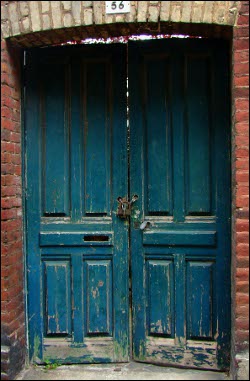 The Telegraph recently had a good article about writers and distraction, opening with a bit about the lengths some famous authors go to in order to cut themselves off from the Internet. When well-known authors are using software created to restrict the Internet on the machines they use for writing (Zadie Smith, Dave Eggers, and Nick Hornby to name a few), what hope do the rest of us have?

The article also mentions several authors who have successfully cut themselves off from the Internet while writing.

And then there’s Jonathan Franzen, who avoids the Internet entirely on the machine he uses for writing. Of those who have an Internet connection where they write, Franzen once said:

“It’s doubtful that anyone with an Internet connection at his workplace is writing good fiction.”

While it’s a bit extreme, I think most writers would be better writers without the distraction of an Internet connection.

I know I would.

When I write, I shut out distractions. I close my Web browser, even if I need to research. (If I need to research, I insert a note in brackets — [RESEARCH] — and move on with the story.) The story matters most…opening a browser for research gets a different part of my brain going and the story suffers as a result.

I keep my phone in another room when I write, and I keep the ringer off.

Only a handful of people ever call or send me text messages; in part, because it’s a rare day that I reply to either quickly. I only let a few people through, since it can be such an easy distraction — and the people who are allowed through understand that if they don’t get an answer, it means I’m writing, driving, or hanging out with people (or just relaxing). Unless it’s an actual emergency or family (or if I have plans to do something with somebody), my phone is generally silent.

I used to write on a laptop with no Internet connection. I miss that. When my main system died, the laptop became my main system — and since that day, even though I disconnect when I write, having access to the Internet is still a problem [for me].

The Problem of Reconnecting

My problem isn’t disconnecting from the Internet when I write; my problem is reconnecting. Over the years, once I get my writing time in, I jump online to see what’s up. I see what friends are doing on Facebook, Twitter, and Google+. I read blogs. I go from this state of floating in a vast sea of nothing in my head to dropping myself back into the noise of it all.

And, in many ways — even though my writing is done — it suffers as a result.

I do myself no favors when I log back on. There was a time when I was never done writing; by that, I mean that even though I was no longer at my desk with a notepad or at the typewriter, I was still thinking about what I worked on. The quiet of it all continued following writing — the story was always on my mind in a much more conscious way than it is after catching up with things online these days.

But It’s What We’re Supposed To Do!

As writers, we’re told we must have a platform. If we’re not available to readers, we won’t have readers; if we’re not constantly networking, we become obsolete.

You will be hard pressed to find somebody who wants to make a living doing what he loves as much as I. I don’t believe in an afterlife; this is my one shot at all I want. While I have a good day job, it’s still time spent doing something out of necessity…valuable time that could have been spent doing the things I love.

When the responsibilities of the day job are done…when time with family and friends is over, I want to write — not be online promoting what I’m doing on Twitter. I want to lose myself in the silence of it all. I want to write the best story I can write.

As I’ve gotten older, I like silence when I write. I tend to write late or early, when most of the world is asleep and quiet. If I’m writing when my wife is awake, I tell her I plan to be busy for the next couple hours and I loose myself in instrumental music, usually classical or ambient electronic stuff, to block out background sounds.

I can write anywhere, but the best writing happens when I feel like I’m the only person in the universe, just floating in space with nothing to keep me company except my thoughts and the story before me.

The noise of social media gets in the way of that focus, even if I write before jumping online. The moment I let myself open a browser, that intimate moment I had with the silence and what comes out of my head is destroyed.

Maybe it’s different with you, or maybe you’re just telling yourself the Internet isn’t a distraction. Maybe the kind of writing you do doesn’t require deep focus. (That’s not a knock on certain kinds of writing. I wrote my second novel on lunch breaks in a loud cafeteria at a job, but…it’s more of an entertaining story than one written to make people think.) Maybe you love the promotion as much — maybe even more — than actually writing.

There’s nothing wrong with that — you probably sell more writing than I do.

But if you are one of those people who require a deeper sense of solitude when writing, Franzen’s words are at least worth considering.

“It’s doubtful that anyone with an Internet connection at his workplace is writing good fiction.”

I’m not a fan of the guy or his writing, but at least for me, he just might be on to something…platform be damned!