You are here: Home / Inspiration / The Horror of it All Pt. 4: My Own Tales of Terror 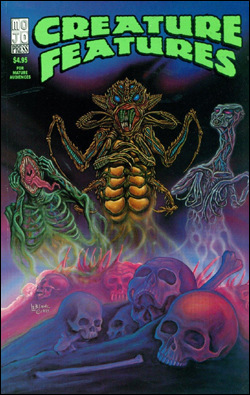 Horror taught me how to write.

No matter what one’s views are of genre fiction, it’s a great place to start when learning how to tell stories. Within any genre is a structure worth learning. Once the basics are learned, there’s so much a writer can do that carries over to other writing — even that “serious stuff.”

The very first thing I wrote with the goal of publication was for a horror anthology called Creature Features. I met the editor, Rick Klaw, at a comic book convention in Dallas. We chatted, and I walked away with a challenge: write a monster story for his consideration.

I used to love writing challenges. (I still do, but I have enough going on that I don’t have the time I once did for challenges. Must…stay…focused… If you like writing challenges, here’s one to consider — might be the oddest challenge you’ll face this year!) Having the opportunity to write a monster story that people might actually see and read had me walking around the convention in a haze of ideas. I could easily pull from my youth and write about basements or attics. (When in doubt, I’m a sucker for the past.) Maybe an ode to 50s B-movie horror? Or just go all-out and write the most gruesome story I could muster…

“Others will go there,” I thought.

So…I took a chance and wrote about a guardian angel. Not quite a creature, but it wouldn’t leave my head. I wrote the story and sent it to Rick, thinking it had no chance of seeing print. 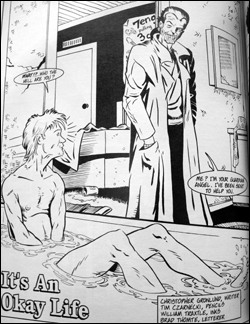 The story, called “It’s an Okay Life,” is a different take on the Christmas classic, It’s a Wonderful Life. Even Rick admitted it wasn’t quite a creature story, but…he just liked it for some reason and thought others would, too. Taking that chance on the story I wanted to write — instead of what I thought I should write — paid off.

Of course, in the world of independent comic books, few things go as planned. The deal with the original publisher didn’t work out, but that turned out to be a good thing because it ended up being the first title published by Mojo Press. That meant a bit more exposure, including the very first signing I did.

While there were quite a few creators  involved. the first signing we did for the book — at a comic book shop in Austin, Tx — wasn’t packed with creators. In fact, it was just me and this other writer…some guy named Joe Lansdale.

Lansdale’s one of those writers I really respect. Known for horror and gritty mystery, the guy is also funny and he has a way of making a reader feel for the characters he creates. Few writers can put a reader within the places in his mind like Lansdale — and when he decides he wants to make you hurt, he can devastate a reader and make them feel a sense of loss for characters like few others.

And there I was, a goofy, green writer — sitting next to him at a table signing books. Maybe if other contributors to the book had shown up, I wouldn’t have felt so self conscious, but it really seemed like it should have been just a Lansdale signing. People definitely weren’t there to see me!

A lot of people in my place would have schmoozed with Lansdale; even been opportunistic of the situation, but at that time, I’d never read any of Lansdale’s stories (well, maybe some comic book stuff.). So…to jump on and try to milk the situation would have seemed smarmy to me. Hell, had I read everything Lansdale had written to that point, I wouldn’t have tried making the moment about me — that’s just the way I am.

At a comic book convention in Dallas after Creature Feature’s release, a friend introduced me to George Pérez, who told me he loved my story. (I was surprised he’d read it.) He went as far as saying “I don’t see good stories like this much these days.” (Something to that effect, anyway.) He was friendly and willing to chat, but…again, I didn’t feel worthy to be in the company of people I’d heard of (and in Pérez’s case, really looked up to). I thanked Pérez and slinked away at my first opportunity.

Okay, so I won’t defend totally slinking away or feeling unworthy in the company of more established writers and artists. It’s not that I didn’t feel I was good enough — I just didn’t want to be perceived as desperate. I wanted to be seen as their equal, and to attain that meant putting in my time coming up. Maybe something good would have happened were I more assertive, but I will always defend that it was right to not glom on to the people I had a chance to be around in the hope of it benefiting me.

Like monsters smell fear, people who’ve made it in their field to some level can smell the desperation of those who want what they have. Many of those who’ve made it are damn nice people who won’t just tell somebody to leave, even when it’s their right (especially in a time when even some of the most accommodating and cordial creators have been deemed “assholes” online by those who’ve felt slighted — even though the creator was giving the true asshole more time than they deserved).

I suppose I could have bothered the creators I’ve met in the hope that eventually one would help me. But…the writers and artists I’m now actually friends with…I don’t even ask them for favors, even though I know they’d help if they can. I know some cool people, in part, because I’m not desperate. If an opportunity arises through a friend, I’ll take it, but I’m not out to force possibilities in a momentary act of desperation because I want something.

Especially since I’m not writing much genre fiction these days.

A New Taste of Terror

Somewhere along the way, horror as a genre seemed to move more toward suspense and torture. I know there’s still great horror being produced, but I noticed attention to creepy tales waned a bit in favor of something more…mean. Interest in the stories I was writing was met with, “Liked this, but we’re looking for more edgy horror.” Creatures chasing and devouring people was no longer edgy; tales of torture were in.

Now, I know 70s horror was full of terrible exploitation films. Rob Zombie kind of revived the good ol’ days of that kind of movie with some of his indie flicks. But even in something as terrible as those old movies, there was still a sense of, “How did they do that?” with the effects. People still had a chance to run away. The first Saw movie at least poses some interesting questions: how far will we go to save ourselves?

I still love a good monster movie with victims who understand the risks. (You go on that deserted planet that could sustain life, bad things just might happen…just like if you go hunting for trolls or dig up a creature hidden in the ice in Antarctica.) But I just can’t sit and watch people being tortured for an hour and a half. It really bothers me.

With that shift in flavor and having learned so much from the wonderful structure offered by writing horror, I moved on to other things, leaving all the creatures lurking in basements, attics, and other places behind — at least until a few weeks ago.

More about that in the final installment tomorrow…