You are here: Home / authors / The Book Pile: The Night Swimmer Review 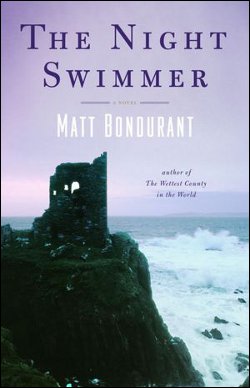 I’ll skip the normal lead in to this review and say this: Amazon.com reviews had me almost reluctant to actually pick up Matt Bondurant’s The Night Swimmer

The general consensus seemed to be, “Hey, this is well written, but not very clear — and the ending just comes out of nowhere. Just FOOM! it’s done! Oh, and the locals in the book don’t seem friendly…”

So…my goal with this review is to defend the book against those reviews…and maybe even be a little critical of certain kinds of readers along the way.

Fred and Elly have a good life, but like many couples still on the younger side of middle age, they want something more. Together long enough that they have fallen in love with certain ideals, one of their dreams comes true when Fred enters a contest sponsored by Murphy’s Stout. The prize? A pub in southern Ireland!

Fred runs the Murphy’s gauntlet — wining a dart throw, pouring a perfect pint, and wooing the judges with a poem — and just like that, the couple is off to a new country to live their dream. As Elly (the narrator) says:

It was a common enough dream for young Americans of a certain set; by moving into a mostly imagined past, represented by Europe, we could recapture something we so desperately wanted in the present.

It’s very easy to fall in love with what one imagines a perfect life, and I’ll admit that part of what attracted me to The Night Swimmer was thinking about what I’d do if I won a pub in Ireland. Elly imagines their new home to be the place that will fill in any holes in her life with Fred:

Our children would grow up tumbling across the heath and moor chasing a setter, and we would observe the quaint customs of the country, a narrow grassy lane bordered with box hedges, the battered Range Rover, scarves and tweeds and Wellingtons.

It’s clear early on that things are never that easy.

What’s in a Name?

With a name like The Night Swimmer, it’s no surprise there’s a lot of swimming going on in the book. All her life, Elly has been a swimmer. Competing when she was younger, it’s something she still pursues as often as she can. Elly’s made to swim; she tells the reader:

I have skin like a walrus. I have a condition called congenital hypodermic strata.

This condition allows her to be a bit more buoyant than most and able to swim in conditions that would have most people chilled to their core.

You might think, “Lot of swimming? That sounds boring!” But the swimming scenes, aside from being soothing (and sometimes terrifying), reveal a lot about Elly’s character and her view of the world.

Anyone who has swum in a pool understands the palpable difference between the sensations of swimming in a few feet of water and in twelve feet or more. It shouldn’t feel different, but it does. It is the knowledge of that vastness beneath you that cannot be shaken of forgotten, something about the drastic proportions and ratios involved. To be nothing more than a speck, a mote of flesh, traversing a vast expanse of water, a long line of horizon, and to feel at once bouyed by the bubble of elements, hundreds of feet from the bottom, is a sensation that I think might be close to flying, like a great soaring seabird, wide ranging and steady above the clouds.

Some of the scenes of Elly swimming alone at night reminded me of scenes from one of my favorite books, Jim Lynch’s, The Highest Tide

(affiliate link). When I read The Highest Tide, I was struck by how colorful Lynch painted the night. Bondurant similarly brings the night coast to life. Bondurant also does a great job putting the reader in Elly’s place — take, for example, two lines from Elly talking about swimming in Lake Champlain:

That kind of depth comes at you from the black bottom like throbbing psychic waves. On a clear night when it got late and darkness began to settle in, with those booming northern stars and the endless sheets of black, it was like swimming in orbit around the earth.

Not once did a scene about Elly swimming bore me; in fact, I looked forward to every time she took to the water.

I’m Hazy about the Vague

All right, now you know what The Night Swimmer is about. I told you this was as much a defense of the book as it is a review, so back to the defense!

In some Amazon reviews, I saw complaints that things weren’t always clear. Everything a reader needs is there, though. It may not be spelled out for readers in the same way Hercule Poirot may come in at the end of an Agatha Christie novel and spell it all out for readers, but I appreciate a writer who gives readers credit. Bondurant gives us what we need. I can only conclude that some people simply rushed through The Night Swimmer, instead of taking time to actually read it.

I’ve chatted with readers who admit to skimming the books they read. Not even so much because a book may have a lull worthy of skimming, but because that’s just what they do. It’s almost as if the perceived hurried pace with which they live their lives is transferred to their reading habits, and out of a certain nervousness that arises when they do something requiring time also comes a rush to read.

Reading has never been a race for me. I can read fast, but why would I do such a thing? Those who boast about reading a novel in a night…I’ve found when I chat about books we’ve both read that it’s clear they missed out on a lot in their rush. While my mind can take in a fast-paced read through a novel, I read at the pace of an audiobook (i.e., I don’t rush). Nothing I needed was missing from The Night Swimmer.

Bondurant gives us everything.

Another complaint I saw about The Night Swimmer is that some readers didn’t understand why some of the locals shunned Elly and Fred.

Have these people never seen or read about a small town? It almost goes without saying that those who are very isolated are often wary of outsiders (the book takes place on islands off the southern coast of Ireland). One of the people who actually speaks with Elly sums it up:

I don’t know what more Bondurant could have done to make it more clear that some people simply want nothing to do with outsiders, which is a big part of The Night Swimmer (thematically, in that what we dream about is not always the way things actually are, and physically, in the way Elly, Fred, and even tourists are viewed by locals).

A Race to the End

The last section of the book loops back to the poem Fred recited to cinch the winning of the pub. There’s also a bit about another poem that gives us all we need to know about the ending. (This other poem, I won’t discuss because it gives far too much away, but let’s just say that in that poem, the final part of The Night Swimmer and what is about to happen is totally spelled out for the reader! To the point that Hercule Poirot would be like, “I will refrain, just this once, from my normal lengthy explanation about all that led to my solving this mystery, for even my precise explanation could not to justice to how obvious this story will end.”)

To those who said the ending came out of nowhere…I have to wonder if we read the same book? That other poem pulled me into the story even more, and as the ending unfolded, so did the pace at which I read the book. At one point I even stopped to think, “I’d love to see this as a movie,” because it was all so visual and demanding.

It takes guts for a writer to say, “Here’s the ending scrawled on a castle wall,” and then exceeding the reader’s expectations. The cathartic storm in King Lear has nothing on the ending of The Night Swimmer!

Okay, so it’s probably clear by now that I liked Matt Bondurant’s The Night Swimmer. It’s been days since finishing it, and I’m still thinking about the book. The descriptions of southern Ireland put me right there. I feel like I went swimming with Elly. At times the book is jubilant; other times melancholy, terrifying, and even creepy. All that, and I think most people can relate to the dreams of Fred and Elly — what’s to miss?

Early on, Elly says of her life in America:

It was a good life. We should have considered what it was we were giving up when we moved to Ireland.

It’s a damn good lesson, and I’m so glad it was a hard lesson learned, because that — in part — is what made The Night Swimmer such a damn fine read!