You are here: Home / Books / The Book Pile: The Sense of an Ending 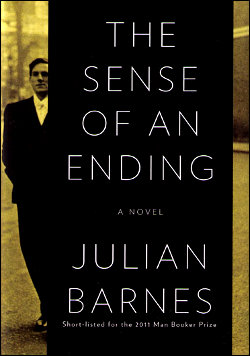 Yesterday, I read The Sense of an Ending

At 163 pages, it’s short enough that I’m tempted to read it again, to see if my feelings about it change.

The book is about a group of school mates who go on to college and then onto their lives.

The second part of the book is the narrator looking back after receiving a letter that leads to learning more about things that happened back then.

The Awe of it All

I’d be lying if I said I wasn’t in awe by how masterfully Barnes handled the pacing in the first part of the book.

In a matter of pages near the end of the first part, he handles a passage of time in ways that left me floored! Just BOOM! “Well, that was about as perfect as it gets without feeling like he just forced the years on readers.”

The book is worth a read just to experience the pacing, language, and that passage of time in the first part.

The second part of the book introduces some things that really hooked me. (For the sake of not spoiling it, I won’t go into specifics about those things.) But the past comes back in an interesting way; it made me love the book even more.

I don’t mind getting into the narrator’s head. I don’t mind a narrator who thinks and shares their thoughts with readers. But at times, it was a bit, “Okay, we get it — you’re thinking about stuff!”

Not that it’s a book that’s driven by plot, but that first part really moves!

That pacing scatters a bit as we wander the narrator’s thoughts.

I don’t know if I’d call what happens at the end of The Sense of an Ending a plot twist, or just a reveal. But since it was all held back like Barnes was holding the winning cards all along, I felt a bit like, “Hey — SURPRISE!!!”

I like surprises. I was okay finding out that Darth Vader was Luke’s father. But had that been the final scene of The Empire Strikes Back or the whole trilogy, I would have felt cheated.

There’s a twist in the final moments of The Sense of an Ending that made me feel a bit cheated. It was still good stuff, and perhaps calling it a twist is unfair because in some ways, it’s a logical reveal. But that it came right at the end — it was like somebody jumping out and shouting “BOO!!! See what I did, there?”

So…Should You Read It?

Despite feeling a bit cheated by the ending, with its length, I’d still recommend The Sense of an Ending to readers. The pacing in the first part of the book and glimpse into the lives of a group of people on the verge of adult responsibilities in England in the 60s flows! Even the second part contains some damn good stuff.

And maybe that twist at the end only seemed like a twist because it was late when I finished the book. And that’s a very telling thing: I couldn’t put the book down.