You are here: Home / Ebooks / A Surprise Audience 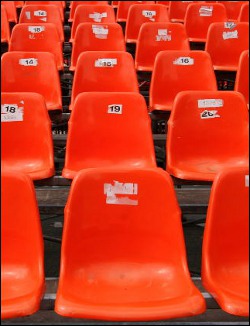 An unexpected thing happened with the release of my ebook, Hell Comes with Wood Paneled Doors: the people I thought would buy it aren’t necessarily the people buying it.

The story is a humorous coming-of-age story about a family traveling cross country in a possessed station wagon. Based on that, I figured teenagers (primarily males) all the way up to guys my age (early 40s…maybe even a little older) would make up most of the readers. But based on the people I’ve heard from, the results surprised me a little.

So who seems to be buying the most copies of Hell Comes with Wood Paneled Doors?

Why This Surprises Me

When I think about it, it should come as no surprise that women my mom’s age are buying the ebook.

I don’t think for a moment that because it’s a digital book that people older than me aren’t tech savvy. (Hell, my mom was the person who showed me how to send a text message on my old phone after sending me a text message, not getting a reply, and asking what was up. When I said, “I don’t know how to reply,” she laughed and showed me.) And we know more women read fiction than men.

But Hell Comes with Wood Paneled Doors — at times — wallows in crude humor. Sure, I could have gone even more overboard, but there are still moments when the humor is something I thought would be off-putting to some. (Generally — while I know it’s not always the case — I think guys are more into crude humor than women.) Of course, Shakespeare was a pretty crude guy at times — not that I’m even vaguely putting Hell Comes with Wood Paneled Doors on the same level as King Lear.

Why It Doesn’t Surprise Me

When I received email and some of the reviews of Hell Comes with Wood Paneled Doors from older women and really thought about it, I wasn’t surprised they liked it. The recurring thing these readers mentioned: they were reminded of when they were younger and subjected to long road trips with their families.

They remember the kinds of quirky side-of-the-road attractions I mention and make up in the story. They remember the battles with siblings and asking if they were there yet. Most of all, though, they remember that no matter how hellish those trips may have seemed 1,000 miles into the trek, by the time the turned around and made it home, something wonderful had happened.

We’re Stuck with Them

We get no say in the people we come up with, whether it’s a grandfather at family reunions with a flatulence problem, a chain-smoking aunt who doesn’t care who’s around when she tells dirty jokes, or the uncle the rest of the family shuns because he’s full of inappropriate stories and always looking for an audience. We have no say in our siblings and parents. We learn at a young age that the best we can do is try to make it work.

There are few times that philosophy is put to the test better than by being trapped in a car with family for days — even weeks — with no chance of escape.

I have very fond memories of my father telling my step brother to give him his hand “for a cool surprise.” The cool surprise? A booger the size of a juvenile banana slug from my dad’s large nose.

There were wedgies and beatings from my big sister for crossing the imaginary line she told me not to cross as she staked her claim to an ever-expanding territory in the backseat. There were complete BS stories my father made up about the things we saw along the way in an effort to see which one of us he could hook and how far he could take a lie. (He once convinced my big sister that a tornado could drive a cow into a Pepsi bottle.)

So sure, none of us have traveled cross country with a possessed car that’s taken over the family Chihuahua in the hope of having it kill us, but any of us who have climbed into a car with family and been forced to endure days on the road with them knows the fortitude it takes and the appreciation of what we had when we got home and realized it wasn’t so bad after all.

Beneath all the crude humor in Hell Comes with Wood Paneled Doors is what matters: family.

So when I look at things that way, I’m not surprised one bit that older women can see beyond all the belching, yelling, and pranks because in the end — the trip is always worth it.