You are here: Home / Miscellaneous / Monday Motivation: How to Find Time 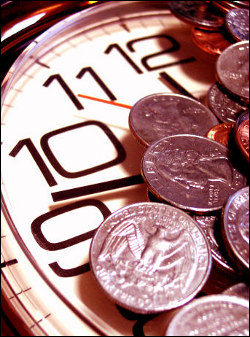 The first cliche I probably ever heard someone say was “Time is money.”

It’s been my experience that the people who say the catch phrase the most usually don’t have much time or money. (But if stress were currency, they’d be some of the richest people I know.)

Since childhood, I’ve liked listening to older people talk; as an adult, I like reading what they write. One recurring thing I’ve heard and read older people near the end of their lives say is, “I wish I had had more time…”

In the end, for so many people, time means a lot more than money.

I’m working on a big project at work. It’s the kind of project that has me checking email at night, working on weekends…all the fun stuff I normally refuse to do.

I’ve heard “Time is money,” (and so many other buzzwords and catch phrases) bandied about in an effort to keep things moving. I’ve seen one coworker so stressed that they became very ill and missed over a week of work, which naturally led to more stress for them and a slow recovery. I’ve seen people shipped around the country in panicked moves that really weren’t issues.

I’d be lying if I said there haven’t been moments when I’ve been a little tense in my shoulders, but I’m generally good about not letting work get to me. In large part, it’s easy because I’ve refused promotions to management positions that came with a Blackberry and a complete loss of freedom. I don’t apply to jobs that I know will have me working 60+ hours a week, even though they usually pay a lot more than what I currently make. On my current project, it’s a temporary thing and not the norm for where I work, so there’s no need to stress too much and give up the things I enjoy.

Right now it’s Sunday morning and I should be working. My work system is running beside my personal laptop, waiting for me to write procedures and track progress on the big project, but instead–I’m writing this entry. While work glows on another monitor in my office, I’m making a choice to do something I’d rather be doing on a Sunday morning. (I’ve already spent time with my wife this morning, and will continue making time together throughout the day.)

This isn’t to say that I’m slacking off or that my work won’t get done. I’m almost as serious about my job as I am having time to do the things I enjoy because I recognize that it’s my job that affords me many of those pleasures. I always take care of the work I do. I don’t let my day job dictate who I am. There are obviously exceptions, but I have a pretty decent work/life balance, even during a deadline on what’s probably the biggest project I’ve ever worked on.

So how do you make time when you feel you don’t have enough time to do all you have to do?

You just do it!

The Power of One Hour

Most of us can find at least one hour of time. Maybe it’s early in the morning, before the day starts moving; maybe it’s an evening soak in the tub and some reading after the kids go to bed. But even during deadlines and all that life throws our way, there’s usually an hour in there somewhere. The problem is, so many people don’t take it. Instead, they try knocking something off their To Do list that’s probably much bigger than it should be and possibly includes some things that don’t need to be done right away.

(If the list is always overflowing, learn how to say no to things and simplify your life a bit. You may not get as much done that you’re not getting done anyway, but time to just sit and think is worth more, at times, than running another errand.)

Many of the people I know who say they don’t have one free hour amaze me with the time they spend on Facebook or other sites. While 60 minutes of time eludes them, they somehow find time to watch television for more than an hour. (Of course, if watching TV is truly your way or relaxing, that’s cool. But I know many people who do nothing but work and watch TV and talk about how they never have time for themselves.)

Even my most busy friends, who work much longer hours than me and have kids and far more responsibilities, find time. They recognize the power in at least an hour most days all to themselves, so they make the time.

I know I might sound like a smug asshole to some: no children, fewer responsibilities than most people I know, etc. But it’s the life I’ve chosen to live. A close friend is the president of software architecture for a large company. He has two young daughters. He’s active with his church, visits family…generally has a lot going on. But if I call him on Monday and say, “Wanna play tennis Tuesday night?” he will. He won’t run through a list of all he has to do before he can play tennis; he’ll say yes 98% of the time. He values his time with family, time to read, time for recreation.

When it comes to making time, he just does it.

If you always have a list of things to do, you’re obviously not getting everything done anyway, so why not take 60 minutes out for yourself?

It doesn’t matter what you do in that hour–just claim it.

The act of claiming time is a powerful thing. It’s a reminder that you are in control, even if it’s just for an hour.

Maybe that’s all you need; maybe you’ll be like me and reject a lot of extraneous things to generally have time to do the things you want to do.

But it all starts with recognizing the power of one hour!