You are here: Home / Miscellaneous / Walking Away 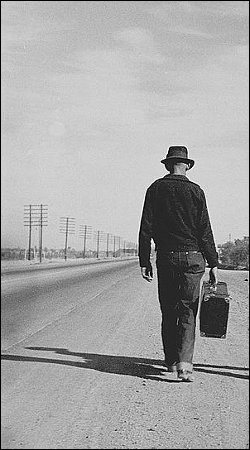 I see writers who talk about how much they really don’t like writing.

And yet, they do it.

They talk about how agonizing writing is, but act as though they don’t have a choice in the matter. They tell would-be writers to run as far away from writing as they can, as though the act of writing is like a syringe full of heroin that automatically presses the plunger against their will.

Their message is this: “If you choose to write, your life will suck, you will hurt, and in the end, the pain only gets worse.”

If all that’s the case, then why the hell write? (There’s no shame in doing something else that actually makes you happy.)

I understand that compulsion, but we do have a choice.

When I don’t write, I get restless. I was a hyper kid with no attention span. I was dropped into learning disability classes for dyslexia and other issues. For whatever reason, I was able to focus [obsessively] on writing and juggling (and, to a lesser extent, reading). It didn’t come easy, but I enjoyed it and I worked hard to get where I am today.

There have been times writing’s been difficult for me, but I’ve always enjoyed it, even when it’s been tough. When I look at the times writing has hurt, it wasn’t writing that was the problem, but other things getting in the way, making it hard to focus on writing as much as I wanted.

If you loathe something, why do it? Why not just stop, or at least change your focus and goals.

I’ve known writers and artists who have walked away from their passions at their best. People around them didn’t understand why somebody so talented would stop doing something they loved. I’ve seen people stop for various reasons: too much time taken away from other things they enjoy, the act of creating got harder the better they got and they expected more from themselves, revising a novel for the 5th – 25th time is the most tedious thing one may ever do, and the biggie: the commercial aspect ruined the fun of something they once loved.

I don’t fault these people. In almost every case I’ve seen this happen, the person was happier after they stopped.

But the people around them weren’t happy; they couldn’t understand why somebody with talent would walk away from what they loved.

The funny thing about talent: it’s not this rare thing many like to believe it is. Sure, some have innate ability, an edge that some seem born with, but talent comes with hard work and the way one looks at things. I’d go as far as saying that if people truly push themselves to get better every time they sit down to do something, that talent is a learned thing that just happens — not a magical thing some people are born with and others can never have.

So when somebody gets angry when a “talented” person stops living a life many dream about, or stop before success comes their way, it doesn’t seem fair to me. The very people knocking the “quitter” have the same shot the “talented” person had, but they chose not to sacrifice for years to reach a level of skill where their talents become evident.

If somebody is going to write, they’re going to write — it’s silly for me to try telling them not to do it. The act of writing isn’t as easy as most people think it is; the dream of making a living as a novelist is unlikely. But it’s worth it. The act of writing, editing, and receiving feedback is worth the hard work, even if you never sell a thing.

If it hurts too much and you don’t enjoy it, then don’t do it, and don’t let people make you feel guilty for walking away.

But at least give it a try for a decade or so and see what happens.

Maybe you’ll stop trying to do it for commercial success and do it for your own pleasure. Maybe you’ll quit entirely. Or maybe — just maybe — you’ll make it!

There’s only one way to find out, and it helps a lot if you enjoy it along the way…