You are here: Home / Inspiration / My Hero Was a Tiny Badass Mightier than Oceans

I was a 21 year-old punk when I met Cuyler Etheredge.

I enrolled in the only creative writing class I ever took, and Cuyler was the instructor.

Cuyler was never a “gimme” instructor– by that I mean one who believed every story that came out of a student was an explosion of creativity. At the same time, she was never mean — always supportive, even when pointing out where something could be made stronger.

It was so forced.

You really got into this, didn’t you? 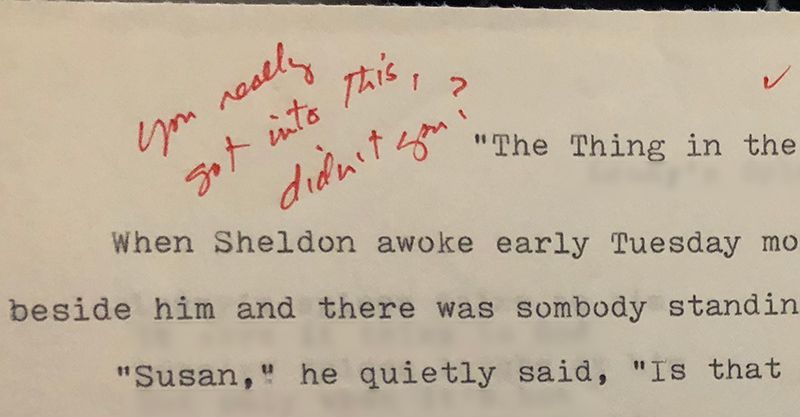 She asked me to stay after class the day she handed our stories back.

I’d been asked so many times during my education to “stay after class,” and it usually meant something bad. But I didn’t feel that from Cuyler. Instead, she talked about how much she liked the essay I’d written as our first assignment — and then went on to ask which writers I looked up to most…the writers who first affected me and what I hoped to one day do.

I rattled off some horror and comic book writers I was reading at the time, and she raised her eyebrows.

I told Cuyler the first “serious” fiction I ever read were John Cheever short stories. I told her I’d read The World According to Garp in junior high school, and that I’d love to write something like “The Body,” from Stephen King’s Different Seasons. I talked about The Zen of Motorcycle Maintenance and Watership Down. I preferred Ray Bradbury’s Dandelion Wine to his science fiction stories.

Those were the books I wanted to emulate until finding my way and doing my own things, but…I felt I wasn’t good enough.

Even today, there are certain situations in which I lack a certain confidence. I felt to even mention my writing alongside Cheever and Irving was arrogant. I was the kid who went through learning disability classes, was told I was dyslexic, and had to sit out a year before even being considered for enrollment at Tarrant County Junior College because my high school grades were so terrible.

Who the hell was I to think I’d make it writing anything, let alone the “serious” fiction I dreamed about writing?

Cuyler looked at me and said something to the effect of, “Then don’t you think those are the kinds of things you should write?”

The next thing I wrote was “Memorial Park,” the first “serious” story I ever attempted writing.

It’s dear to me, but I will never understand why she loved it as much as she did. Maybe because she knew how much it meant to me to finally write something that wasn’t about a monster that controlled crickets…that drove a man so mad that he murdered his wife. (I’m not kidding: “The Thing in the Doorway” was a really bad story!)

The school had a literary journal, and Cuyler encouraged me to submit “Memorial Park.” When it was rejected (and a poem I’d written was accepted, instead), she assured me it was not anything I did wrong with the story.

I was fine with the rejection; that Cuyler loved it so much was all that mattered to me.

The Rest of That Semester

I’ve written about that semester (and my friendship with Cuyler) before. (Go here and scroll down if you’re interested.)

The rest of that semester found me writing stories I felt were beyond my abilities. I met a literary hero (Ray Bradbury) because of that semester with Cuyler. I gained so much confidence in those months. My only regret was not realizing I could have taken other classes with her.

But even after that class, we stayed in touch. I could feel terrible about so many things in school (and even life), and a few minutes chatting with Cuyler made everything better.

A Letter of Recommendation

I don’t know if many people close to me even know this, but I got into the University of North Texas — in large part — because of a letter of recommendation Cuyler wrote for me. No one in my immediate family even graduated high school, and she helped me get into a four-year college a couple years after meeting her.

When I read that letter…it was at a rough time in my life. My father died when I was 22. I felt like nothing in life was right at the time. I met my wife when I was 23, but felt like I’d never get anywhere beyond warehouse and factory work. And then this person I looked up to like few people I looked up to wrote this damn letter praising me. Not even so much as a writer, but as a human.

It’s not a thing I talk about a lot, but with a history of being picked on and being big and clumsy, it’s not often I felt human — even well into my 30s. But reading that damn letter, I felt invincible.

It’s probably no surprise to anyone reading this that because I’m writing about Cuyler in the past tense, that this isn’t the happiest of entries.

She died this morning after a battle with pancreatic cancer.

I don’t have many heroes in life…

It’s easy to see a celebrity or someone else you look up to and think, “There is my hero.” But you often reach an age when you realize the people you looked up to when you were younger are not the perfect people you imagined them to me. [Okay, maybe with the exception of Walter Payton!]

I’m not sure I have many heroes these days…even though I look up to many people.

Cuyler, though, is one of the few people who will always make me say, “She’s my hero, dammit! Because every friggin’ year, she somehow became bigger and better than the year before. And if I can be half that big at heart, I’ll have succeeded in life no matter what I do!”

I want to keep writing about Cuyler, but I’ve not gotten in my daily writing on the novel that’s sooooooooo close to being readable.

I can think of no better way to honor what she meant to me by shutting out the world, now, and writing…