You are here: Home / Podcasting / A Year Without Lumberjacks 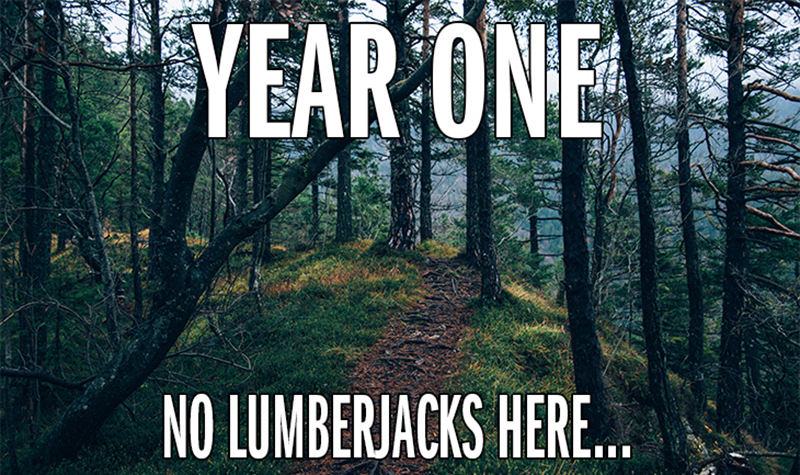 Yesterday, Not about Lumberjacks turned one year old.

It started with a story about a dog who eats everything in sight: “Gutterball.” As I’ve mentioned elsewhere, I ended up writing more new stories in the first year of the show than I planned. And the way those new stories developed has surprised me quite a bit.

Once Upon a Time

There was a time when I worked in warehouses and factories and other jobs that allowed me to be in my head all day. Because of that, it was not uncommon to roll a story around in my head until it was almost fully realized up in my brainmeats.

I’d rush home and often knock out a story in a sitting. I’d give it a touch-up the next day, have a few trusted readers offer feedback — make any changes based on that feedback — and call the stories complete.

My process at the end is still largely unchanged — I polish the story once and hand it off to trusted readers — but other aspects of the process are much different.

As a technical writer, I can’t afford to roll stories around in my head all day at work anymore. I have to dedicate my brain to what I’m paid to do. The days of fully-realized stories in my head are long gone.

These days, I tend to break stories into chunks (using Scrivener). Then I jump into those little sections and make them whole. They often link themselves together quite well, and — eventually — I have a whole story.

I initially worried that the new(ish) process would result in stories that felt segmented, but what I’m writing feels more realized than older stories.

Chunky works! (For me, anyway…)

I suppose the biggest change to the way I write short fiction these days is the way endings come together. As I mentioned, I used to decide on an ending as I realized a story in my head when I worked menial jobs. Today, I have time to look at endings and think:

Is this the best way to go with this?

Case in point: “The Other Side.”

The story is about a recently divorced (and unemployed) guy who breaks into his childhood home to see if there’s still a portal to a magical realm in his old closet. My first thought was a rather typical ending: he’d go through the portal and rekindle an old potential romance…a happy-enough ending that would have been the ending years ago.

I knew that was quite typical, though…and let’s be real: stories about other realms are nice and all, but the reality is we’d all probably end up dead in a world where monsters roam freely. And so I thought:

Rolling all those potential endings around in my head, and having days to think about it because sometimes work is busy and demands more of my time, led to choosing a much better ending than:

Daniel goes through the portal and  meets up with his childhood sweetheart on the other side.

I started Not about Lumberjacks to get me back to writing short fiction. Novels and work were the priority for years. Until I wrote the first new story for the show (fan-fave, “Horus”), I’d not written a short story in probably 6 or 7 years.

By forcing myself to a monthly schedule to produce a show featuring short fiction, I ended up writing more new stories in the first year than planned.

I already have a pile of older stories on deck to go for next year should they be needed. (Work obviously pays the bills and sometimes demands a bit more time than usual — and during those times, it’s nice to fall back and revisit an older story.) But I also have a pile of ideas for new stories (and even pieces of stories) ready for next year as well.

Not about Lumberjacks did exactly what I hoped it would do, and I thank everybody who’s listened to a story or two in its first year…