You are here: Home / Inspiration / How to Ask for Help 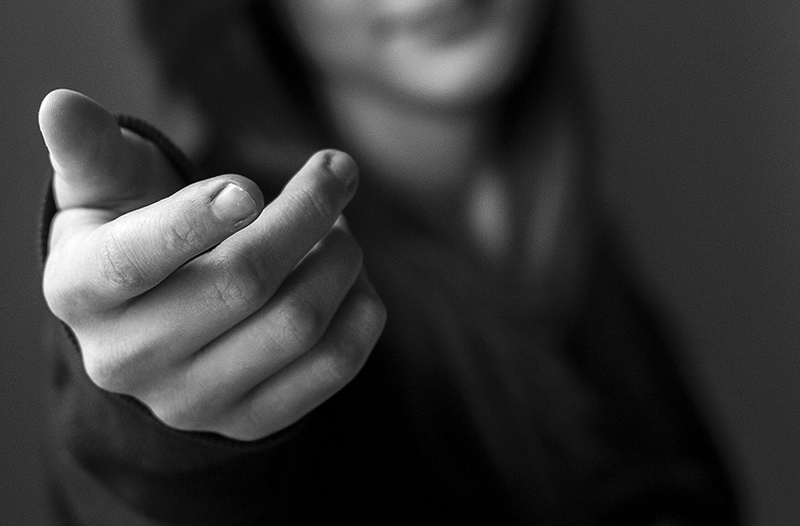 Peter Salerno was my great grandfather. He came to America from Italy with very little and ended up doing well for himself. The quick version goes like this:

He went out west and followed cattle trains. He bought cattle, butchered them, and sold the cuts to cowboys. Somewhere along the way, he came in to two boxcars full of lard, which he had shipped to Chicago. He sat on it until — I shit you not — there was a lard shortage in Chicago and he sold the two boxcars of lard for a profit. With that, he opened a butcher shop/grocer.

Grandpa Pete was the kind of guy who refused to ask for help. You made your own way in the world; asking for something was akin to begging for him. In fact, he thought trick-or-treating for Halloween was begging, much to my mom and uncle’s sorrow as children. (They were raised by my great grandparents and had to sneak out on Halloween.)

This is not to say Grandpa Pete was cold — he was quite generous. When things were tight for some in the neighborhood (Harrison and Racine, in Chicago), he didn’t charge as much or floated some food to help them get by. He gave one of my great aunts a loan so she could open an art gallery in Manhattan. While he liked helping others, he would not ask for help himself.

And that tumbled down to others… 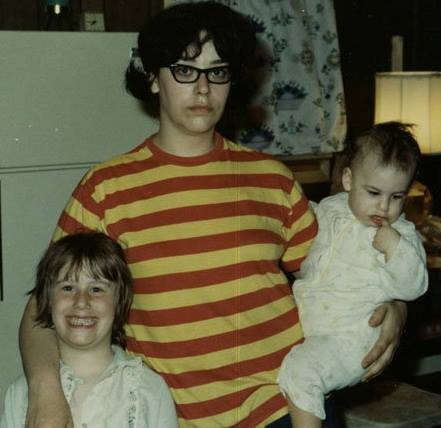 The very tired woman holding that drooling little cherub (me) is my mom, Mary.

As I mentioned, she was raised by my great grandparents, so some of Grandpa Pete’s traits were/are strong in her. When she became a single mother when I was five, she didn’t ask for help…she just did what she needed to do to make sure my sister and I had what we needed. Even when she eventually remarried, she had a difficult time asking for help.

I inherited that behavior…

The great aunt with the art gallery I mentioned above? One day when I was in my very early adulthood, after a friend and I moved out on our own and I eventually moved back home, my aunt called to talk with my mom. My mom was out someplace, and I ended up chatting with my aunt for well over an hour. At the time, I would not have been able to pick her out of a crowd. I think the only time I saw her was for funerals, and I was young when those funerals occurred. (Really, all I remember about those funerals were Sicilians in black who reminded me of weeping penguins.)

So Aunt Catherine existed only in stories my mom told me. (All of which were about how great visits to Manhattan were…and how generous Aunt Catherine was.)

An example of her generosity: during the phone call, she offered to move me to Manhattan and put me up in an apartment she had there. (She was, at the time, living in the New Jersey countryside.) She offered to put me through school. When I told her I didn’t have the best grades, she said that wouldn’t be a problem at all…she donated to several schools and, as long as I didn’t do poorly, I’d get a second chance.

When she heard that I wanted to write, she told me she could introduce me to people she knew. (And she knew some very cool people. <— A letter from James Laughlin, the founder of New Directions Publishing. She was also friends with Truman Capote.)

I turned down the offer because the Pete gene is strong in me, even today. I feel very weird sharing this information. I have very close friends (some, for several decades) who know nothing about that side of the family and their connections to art, literature, and architecture because their accomplishments are not my accomplishments — so I rarely speak of them.

I still feel like it’s up to me to make my own way in the world. At least that’s what the old rocks in my family handed down to me.

So Why Am I Sharing This?

Yesterday, I met with someone I met in early 2010 at a career management program after we’d both been laid off from different employers. She’s currently working at a company that is helping out the company where I work. Since she was in this part of the Dallas/Ft. Worth Metroplex, we got together for a couple drinks. We talked about work stuff and then…talked about other things we’ve been up to.

I mentioned writing. This friend, being the kind of person who can quickly look at a situation and assess all kinds of things a person like me misses, asked how I’m getting my writing seen. And there, I had to confess, “Not very well…”

She knows that I have no problem approaching people I don’t really know in an industry and asking for help. But when it comes to people I’m closer to, I feel like asking for something is a betrayal of trust. Kind of like, “Will this person think I’ve been friends with them for decades only for this moment when I say, ‘Hey, can you help get this read?'” (Stupid, I know.)

I am a very confident writer (self doubt and other things plaguing many writers is almost non-existent with me), but I’ve never been the most confident person. I still struggle with feeling big and awkward and clunky. It’s not that I’m amazed that people like me, because I know I’m a good person, but there’s this strange loyalty thing going on somewhere deep in my head where I feel like asking for something that helps only me personally is smarmy.

And that’s where yesterday’s chat helped out.

It’s Not All About You

I won’t say I was shut down when talking about this yesterday, but a new perspective was definitely dropped on my head. All these years, I’ve viewed asking for help as only benefiting me. But the person I chatted with yesterday asked me how I feel when helping others. Obviously, I like helping others because I’m like my great grandfather floating someone in need some food until they are back on their feet. It’s a good thing to do, and sure…it even feels good.

Paraphrasing, here, but this was the point being made:

So see, Christopher…it’s not all about you. People like helping good people, and even though we’ve only met once in person before, I remembered you. I reached out and asked you for help today, and you dropped things during a busy time for you and met up with me. By not asking for help, in a weird way, you’re denying other good people the ability to help someone they like. You’re not the only person who likes helping people, you know…

It seems so silly that this was a profound idea to me, because it’s so obvious.

I know a lot of it goes back to simply being happy that anybody will hang out with me; in many ways, I suppose I still carry some of that kid who was one of the most picked on kids in his junior high school. While I’m more confident than many people, there are still those little corners of interactions with others that make me feel like, “Why is someone so cool giving a geek like me their time?”

Why Is Asking for Something So Damn Hard?

I don’t lack confidence as a writer, but I lack confidence as a person in certain situations. I have no problem getting up in front of a group and speaking at a tech meetup or conference and sharing what I know…helping others. I have no problem contacting someone in charge of a conference and pitching a talk to them. But when it comes to asking someone close to me for help, I feel it’s some weird betrayal of trust that I’m sure only I see. Because, of course, the people most likely to help me are the people closest to me!

So being afraid to ask those people for help is silly, I know.

I’m sitting on a completed novel I’ve not really shopped around and working on the second draft of something new. I’ve been prepared to shelve the last novel I wrote without really giving it a fair shot at being seen; in large part, because I’m afraid to impose on others by asking for help. Before putting that book up, it’s probably only right to give it one more look and then…well…how about one more story about Grandpa Pete…?

My great grandfather was in his store one day and noticed a teenager stealing an apple. Grandpa Pete called out to him as he went for the door and started running. Grandpa Pete chased him down and grabbed him — may have even taken him to the ground. He asked what was up, and the kid said he was hungry.

Turns out, the kid’s dad was out of work and the family had nothing. Grandpa Pete dragged him back to the shop and packed a bag full of food. He told the kid,

You don’t steal — you ask! Understand?

I can’t remember if he also offered the kid a job delivering groceries, but that’s the kind of person Grandpa Pete was. He would go hungry before asking for something himself, but all someone in the neighborhood had to do was explain the situation and ask for help…and it would be granted.

While I would never steal, while chatting yesterday after work, I was told that in a weird way that — by not asking for help — I’m robbing other good people from the opportunity to help someone. The remedy for that is to simply, finally, ask…