You are here: Home / Books / What Goes Into A First Draft 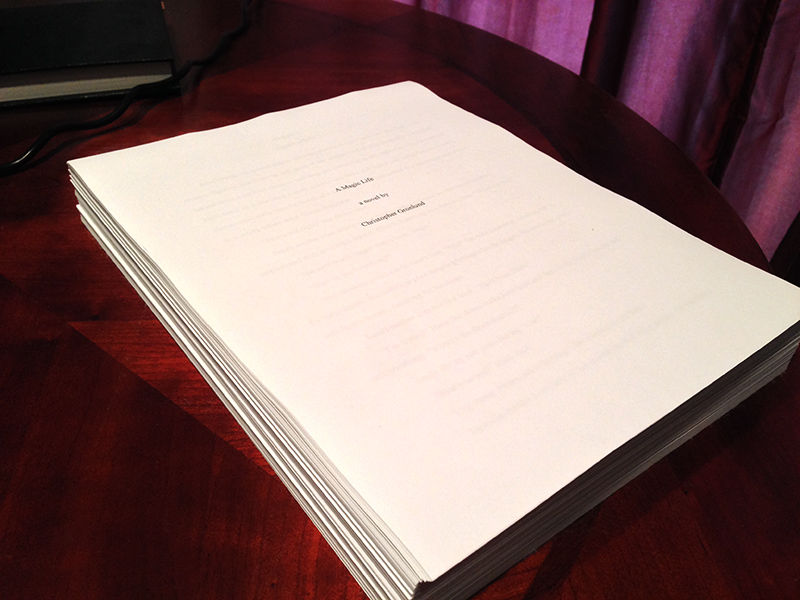 Sure, there are some rough edges and parts where crude notes like MAKE BETTER! and DESCRIBE MORE SHIT! linger. Some parts — most of the novel, really — is pretty readable (which is unlike any other first draft I’ve written). Oddly, the parts that I plotted out the most before writing are the parts that will need more than just a polish.

It’s been quite a thing, writing this novel…and there’s still so much work ahead. Some thoughts after printing the first draft…

One of the reasons I’m not the biggest planner before writing a novel is things change. I always have rough ideas and things I write toward, but I’ve found that things often don’t become truly clear until you’re deep into a story. (Which is why writing instead of planning and planning and planning seems to work for so many writers. It’s not that we don’t plan — it’s that we know we can’t put it all down before writing and say, “This is the story that will happen.” Planning in chunks, as more comes into focus, works best for many writers.)

Some of the changes that happened along with way with A Magic Life:

After 21 years of loyal service, my old HP LaserJet 4L printer died…while printing the first draft of A Magic Life. (More on that later this week — it deserves an entry all its own.)

The Funny Thing About Wondering

All those what ifs can get to a person. Some people never even finish a short story because they obsess about so many possibilities. There’s something final in finishing something.

If nothing happens with a story or novel, some feel dejected; they have a hard time coping with no one wanting what they spent possibly years creating. It’s why I think one should work on the things that mean the most to them, the things that if no one — not even those closest to them — read…they’d still be satisfied in the effort of doing something they wanted to do.

I can sit here and wonder about so many things, but I have several rewrites with this novel ahead of me…and planning a couple more novels that make up this story.

Wondering and obsessing can be much easier than finishing, but with tinkering with something too much comes a pain of never finishing something. Sure, if you don’t finish, it’s easy to hide behind all that wondering, but wondering too much can eat at a person.

At some point you have to finish things to find out what happens. I look forward to seeing what happens with this three-book story about a girl born in a circus and her rise to fame as a magician in the 40s and 50s…