You are here: Home / Books / Books…and the Movies They [Sometimes] Become 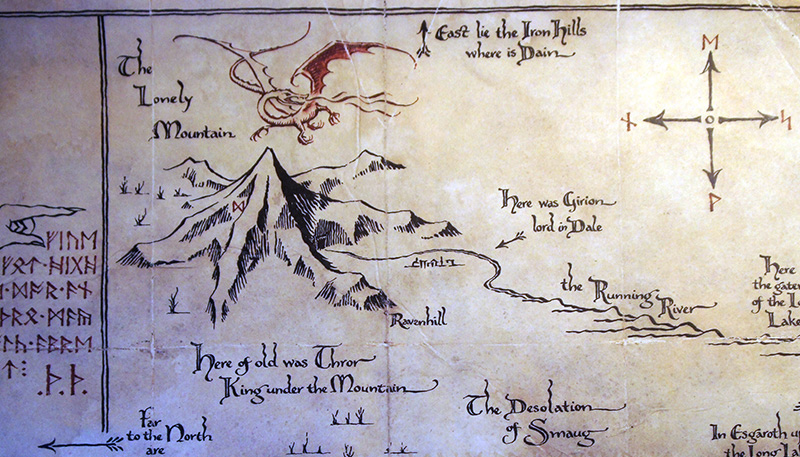 This is where the unwritten law of the Internet dictates that I say, “Spoilers ahead!” because I’m talking about The Hobbit book, which has been around since 1937.

With the book being around 77 years, if I said, “Thorin, Fili, and Kili die in the book,” is it really a spoiler? It’s an old book that has had time to be read. You don’t hear people reading The Bible saying, “Hey–SPOILER ALERT, DUDE!!! I didn’t know Jesus died!”

You have been warned…

My Relationship with The Hobbit

I recently wrote this little bit on my personal blog about The Hobbit on the anniversary of its release in 1937. I first read the book in 3rd or 4th grade. Even then, I thought:

Man, this book falls apart after Mirkwood. So let me get this straight: Bilbo and Thorin are the biggie characters and you have a human suddenly appear, kill Smaug the dragon, and not give the kill to the title character or the other main character? That’s almost as shitty as making Bilbo turn over the Arkenstone to Bard right after Thorin says it is worth more than rivers of gold.

(Should you say, “Well, Bilbo was only trying to keep the peace by handing over the Arkenstone,” you’re wrong…at least where the book is concerned. When Bard appears — with an army…and the elf that imprisoned Thorin and company — and says, “Give us our gold,” Thorin says he will gladly give gold to Laketown soon. [Once they find the Arkenstone.] And Thorin throws in, “Also, don’t come back with the elf — he is entitled to nothing!”

Bilbo could have averted a run-up to war had he not screwed over the company. In the book, Thorin wasn’t going mad…like he does in the movie.)

But as much as I saw the flaws in The Hobbit when I first read it (and with each additional read…once, I read it in a tree), it’s the first book I remember really seeing in my mind. I could see Mirkwood. I felt like I was there. I can never say Tolkien was a great writer, but…he was an incredible builder of worlds and imagination. The Hobbit shaped me as a kid as much as Bradbury’s Dandelion Wine and L’Engle’s Wrinkle in Time shaped me.

The Hobbit is one of the more important books in my life.

I was very apprehensive when I heard they were turning The Hobbit into a three-part movie. Two seemed fine, but three? That seemed like a recipe for bloat. (I called it, here.) And after seeing the final movie Tuesday night, I feel confident in saying, “Yep, bloat…and a whole lotta elf parkour!” (Seriously, see the movie and tell me if the part with Legolas and the falling stones is not EXACTLY what they would have done if he hosted Saturday Night Live and they spoofed his acrobatics.)

The fascinating thing about Peter Jackson movies is all the behind-the-scenes footage shot and shared with the DVD releases. And, in seeing those peeks into the process (which I highly recommend), it’s easy to understand why they do certain things not in the book. If you’ve ever complained about a movie not being like the book — seriously — the price of any special edition DVD (Lord of the Rings or The Hobbit…or all of them, like the geek writing this) is worth it for the process.

So I am always fine when a book and movie are not alike. Sure, I usually like the book more, but I’ve seen movies that made even books I liked even better.

I wish I could say The Hobbit was one of those cases.

I Guess I Hoped for a Fix

In many ways, it’s not fair that I hoped — maybe even expected — that the choppy parts of The Hobbit book would be smoothed out in the movie. In some cases, it’s fair to say they were. (While I felt Bilbo should have turned over the Arkenstone when he found it in the treasure hoard, at least he’s not made out to be the backstabbing little shit monkey he is in the book.) And Bard…well, at least it wasn’t, “Here, let a human appear out of nowhere and kill the dragon, denying the right to the Title Character or the dwarf who is reclaiming the kingdom of his ancestors!”

Making Bard more than Mr. Deus Ex Machina is fine by me — even though I’ve always felt Bilbo or Thorin should have had the kill.

There was some outcry when the look of the dwarves in the movie was revealed. Especially Thorin and his nephews, Fili and Kili.

In the book, Thorin is described as having a long, white beard that he tucks in his belt. He wears a blue cloak with a silver tassel. In my mind, he looked like this. 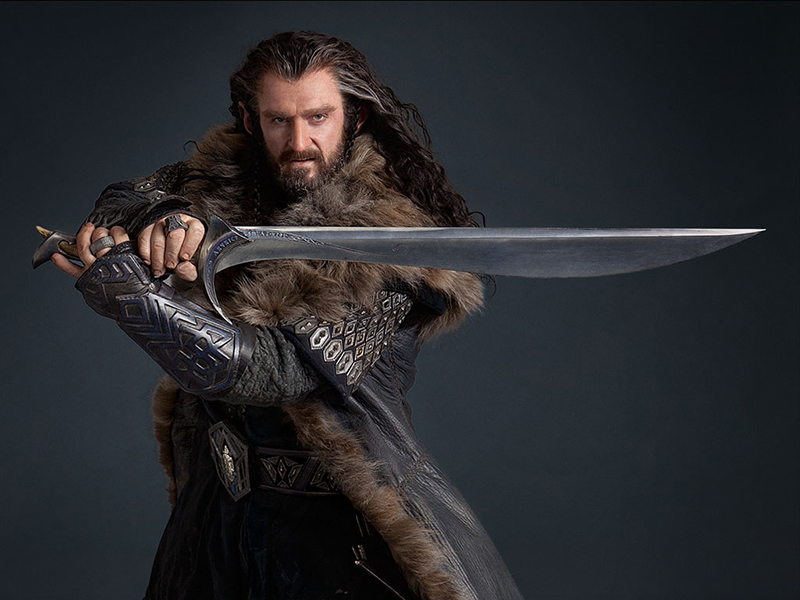 I was skeptical about it at first because…that’s not the oldest dwarf in the company with a long, white beard. But this is where movies and books sometimes must differ (and where additional story is often layered in).

That’s a short beard. It is short because movie Thorin has vowed to keep his beard short until he reclaims Erebor for his people. Peter Jackson said they went with a younger dwarf because there’s a lot at stake in the age: proving himself, avenging the death of a grandfather and the madness of a father — and an audience needing to root for a king with many years ahead in his reign. Not to mention that I’m sure Marketing was like:

It sure wouldn’t hurt if Thorin and his nephews were good looking.

But it goes beyond that, really. These are three characters who die…and the deaths are supposed to sting. (I heard a couple gasps when Fili was the first of the three to go in the movie…even though he didn’t die as he did in the book.) To have done the death scenes in faces covered in heavy makeup prosthetics would have detracted from the emotion at least two of the actors were able to summon on their faces. (No real close ups of Fili when he died.)

Forced to make the same decisions Peter Jackson and others made, I can’t say I wouldn’t have gone the same route.

A movie and a book should, at least in some cases, be different.

By more, I mean a totally new character in Tauriel, a female elf who — despite the studio wanting a love triangle involving her — served the story well in other ways. Just like The Hobbit being tinkered with by Tolkien after initial writings, Peter Jackson wanted these movies to lead in to The Lord of the Rings movies very well…and Tauriel is the character who helps bring Legolas into a bigger world. (And serve as a voice for modern times that, like it or not, the world is big and on our doorstep so maybe we should make better efforts to aid others as our neighbors.)

There are many additional scenes in the Hobbit movies; so many, in fact, that they did a lot of reshooting and seemed to use a crowbar to get certain things into the movie. (I would have still preferred two movies.)

The Book is Still the Book

I’ve heard people say the movies ruined the book for them. I never understand that. As flawed as I’ve always felt the book to be in parts near the end, the book was just as much fun to read last year as it was when I was a kid. You could have put Smaug on roller skates and made this a musical starring Taylor Swift as Bilbo and the book would still be the book.

If a movie can rob one of their love for a book they enjoy, I question how much they really enjoyed the book to begin with. If anything, when terrible adaptations of books I love have been made, it only makes me appreciate the book even more.

Movies Can Be Magical

It’s probably clear by now that I thought the Hobbit movies had some flaws. But just like the book on a shelf, those moments cannot take away the magic I did see on screen and read as a kid.

Sure, I guess I bristled a moment when I saw Frodo in the beginning of the first Hobbit movie. But then I saw what they were doing, and because of how they opened the movie, they got to work in that first line: “In a hole in the ground there lived a hobbit…” I still get chills when I see that.

As long and drawn out as the arrival of the dwarves was to many, I can watch that opening over and over because — even though Thorin doesn’t look like the Thorin I saw in my head as a kid…he looks like the younger version of that dwarf and that is even cooler. The arrival is just a lot of fun, and when they sing “Far Over the Misty Mountains Cold” … well, that’s what sold me in the trailer of the first movie and made me think, “Okay, I’ll at least have that.”

I got to see Bilbo and Gollum riddle in the dark.

In The Desolation of Smaug, I got to see a surprise opening that is one of my favorite scenes in all three movies. I’m glad Tolkien continued tinkering with his stories and that sometimes movies add things because dammit, I friggin’ love that opening!

I got to see Beorn! (Much better in the extended edition — wasn’t pleased with the quick stopover in the theatrical release.)

I got to see Bilbo and Smaug try to outsmart each other on the treasure hoard.

In The Battle of Five Armies, I got to see a very different thing that surprised me in spots until it became a smoldering wreck that seemed directed by a marketing team and not Peter Jackson. But I also got to see the Bilbo that Bilbo should have been in the book — at least in spirit. Sure, one moment he’s a badass fighter and then reduced to throwing rocks and seemingly not knowing how to use the sword he’s used to butcher orcs and spiders, but at least he didn’t screw over Thorin the way he did in the book. (And I liked the addition of the acorn.)

Best of all? Despite all the flaws, I got to see in the three movies scenes that have only existed in my head for the majority of my life.

That alone made it all worth it to me.

If nothing else, at least the movies aren’t THIS:

(See, things can always be [much] worse.)