You are here: Home / Productivity / The Distracted Writer 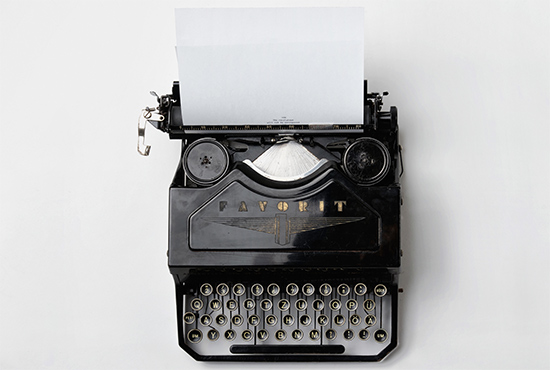 I saw this recently — a word processor mimicking a typewriter that promises distraction-free writing.

Some writers use old, manual typewriters — and not just in the pursuit of hipsterdom, but to avoid distractions. Others grab a pen and paper and write longhand manuscripts.

On Sunday, I listened to this great interview with Robin Sloan again. In the interview, Sloan talks about Freedom, an app that prevents you from hopping online when you should be doing other things.

I’ve seen many other apps and methods created to keep writers offline while writing.

While it’s not a weird concept to apply the Pomodoro Technique to writing, it seems like it wouldn’t allow one to fully go deep enough to achieve great writing; especially when — in the back of your head — you’re probably thinking, “Only 25 minutes until I can check Twitter again!”

I don’t know why writers get so distracted, but it all got me thinking…

Whether you like Jonathan Franzen’s writing or not, he’s almost become as known for being an outspoken critic of the Internet as he is for his big, boring books. (You can probably tell I am not a fan of Franzen’s fiction.) As much as I’m not fond of Franzen’s books (but the guy can craft some great sentences) — and as dramatic as he gets when talking about the Internet — if you put some of his rage aside, he makes some good points:

“Every good writer I know needs to go into some deep, quiet place to do work that is fully imagined. And what the Internet brings is lots of vulgar data. It is the antithesis of the imagination. It leaves nothing to the imagination.”

Let’s ignore the curmudgeon-on-steroids branding of the Internet containing nothing but foul, unimaginative content (I will, however, allow you to point out that Franzen is anything but imaginative in his writing). With all that out of the way, let’s take a look at the part of this that matters.

Good writers do need to live inside their heads and spend time in solitude to produce great and lasting work. That’s not to say someone who’s online often can’t write a good book. I mentioned Robin Sloan above, and Mr. Penumbra’s 24-Hour Bookstore is, at least to me, a beautiful book. But I’ll admit that Mr. Penumbra’s 24-Hour Bookstore is more ideas and emotion than heady prose you want to savor.

Back to Franzen…there’s bitterness in this next Franzen quote, as well, but some truth, too:

“It’s doubtful that anyone with an internet connection at his workplace is writing good fiction.”

I agree with Franzen’s points: to write well, one must [generally] avoid distractions.

I write well when I don’t look at Facebook. I’m at my best when I take complete breaks from social media. I use the Pomodoro Technique at work: focused blasts of 25-minute production, and then a 3-5 minute sweep of Twitter or Google Plus. Maybe even Tumblr. But I rarely need to roll the writing I do at work around in my head as I do with fiction. Technical writing is simply a task for me. While I have the best job I’ve ever had, it is not something I’d do if I were independently wealthy.

If money were no object, I’d still write novels, though…

And the best writing in those novels almost always comes on breaks from the things that distract me most in life.

The Strength in Solitude

There is a lot to be said for days, weeks, and even months of distraction-free writing — no word quota with a peek at what’s happening online as a reward. For me, writing is its own reward, and when I take breaks from most things online, I find myself coming up with my best ideas.

I read an Isaac Asimov essay this morning about how people get new ideas, and this is the line that stuck out:

My feeling is that as far as creativity is concerned, isolation is required. The creative person is, in any case, continually working at it. His mind is shuffling his information at all times, even when he is not conscious of it.

Even the writers I know personally who love Twitter and other distractions step away from it all when writing. For me, it’s as simple as turning my phone over so I don’t see my screen light up if one of 5 people I allow to text me actually texts me. (My phone has no other push notifications set. No sound or vibrations. In fact, recently, I noticed that when I’m home…something about our cell tower causes my phone to go straight to voice mail on the rare occurrence I get a call…which is fine by me. I freely admit that I am a bit extreme in this regard.)

If you love writing, why would you need “distraction-free” devices, apps, and methods? Why would you befoul that moment of writing by jumping online and looking at your social media feeds? How can you be even in the middle of a difficult passage and think, “Well, better go watch people getting hit in the nuts instead of working this problem out!” (I share this 4 minute compilation of crotch shots as proof that I am not above killing some time online. I’ve seen this compilation several times, and almost always watch it in its entirety. I say this with no shame.)

How To Avoid Distraction While Writing

So how do you not let distractions get the best of writing? Simple:

Love writing more than being distracted!

If you can’t do that, I question why you’d bother writing at all.

Sure, go ahead and tell me we can’t help it — that the act of going online is like a drug hit to the brain that we crave. You won’t get much argument from me; I have loved the World Wide Web since the day I first logged into the UNIX shell that came with my college account in the early 90s.

But the chemical rush I crave even more is that of writing well. It’s those moments when I surprise myself and leap up from my chair, point at the screen, and say, “Holy shit…I wrote that!”

I even love the struggle.

Maybe — especially — the struggle…because that’s where writers shine their brightest.

Writing is largely not made in those brilliant moments, the times we feel like gods making new life that will change everything the world knows. It’s comes in the moments when we sit and struggle and it doesn’t come easy. Those are the moments that separate writers from people just wanting to write. It’s probably safe to say there are more of those difficult moments when writing a novel than the brilliant moments.

And that’s all the more reason to embrace the act and not let anything distract you from what you may not even know you’re capable of doing until you go deeper than most and come up with something great.