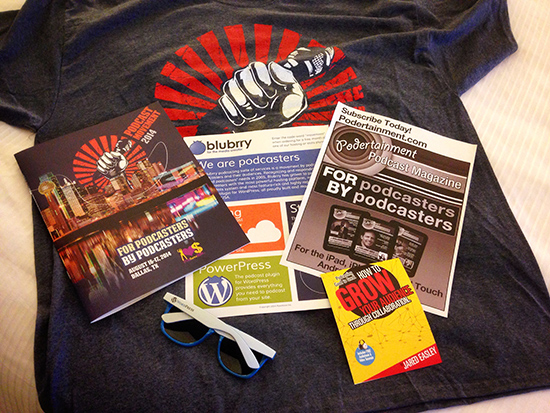 Last weekend, I attended Podcast Movement 2014, in Dallas. Over 600 podcasters from all over the world descended on the area. (If you’re interested, I wrote about it here.)

If you know me, you know I tend to be shy in groups. Even around people I know well, the moment there are four or more people, I tend to get quiet. So large conferences might sound like a daunting thing to me, but they aren’t. It didn’t hurt that Podcast Movement is local and I already knew many attendees. But even if I hadn’t, I’d have still mingled and had a great time.

I left the weekend with plenty of new ideas. I plan to finally get around to podcasting Old Man and zipping out intros to Hell Comes with Wood Paneled Doors and offering it on Podiobooks.com. I also have an idea for a short solo podcast bubbling around in my head. (In addition to Men in Gorilla Suits, which is going strong as we are starting the climb toward 100 episodes.)

While the weekend was all about podcasting, I still walked away with five writing lessons.

I’m usually shy, but at conferences, I have no problem looking at somebody and saying, “Hi, I’m Christopher — so…what do you do?” They know I’m not asking about a day job, so they talk about [in this case] podcasts. Usually that intro is followed by “That’s cool — have you done any other podcasts?” “What do you do when you’re not podcasting?” I maybe told people what I do about 1/4 of the time because I was listening to the people I met.

I’ve always believed listening is the best skill a writer can have. Picking up the subtle differences in the way people talk is great, but being able to get out of people what they’re excited or concerned about is better. Many writers I know spend their time listening filing things away and not completely listening to what’s going on around them. For me at least, so much of writing is about conveying emotion and making a reader feel something, and that can be hard to do unless you truly commit to listening.

Sure, the physical image we portray as writers matters (even if you’re going for the Alan Moore look), but in this case, I’m talking about presentations. Obviously, presentations are a huge part of a conference — and Podcast Movement was not without its share of great speakers.

Like it or not, if you want to be a successful writer, you’re probably going to have to do some public speaking at some point. For a group known to be on the introverted side of things, that can seem daunting, but it’s really not that difficult with practice. (I say this as someone who used to be so shy that I almost passed out during roll call in school.)

Toastmasters is an affordable, supportive, and great place to practice public speaking — and there is probably a club nearby no matter where you live. Many groups at Meetup.com allow members to give presentations. (I’ve spoken a couple times at the DFW WordPress Meetup, which led to speaking at a larger tech conference, as well as speaking at Podcast Dallas.) If I can do it, you can do it…so get busy speaking!

For all the great speakers at Podcast Movement, follow up polls show most people got the most out of the conference through the people they met. Some of those connections were strictly business, but most quickly became a combination of friendship and business.

Writing is a solitary act, and it’s a nice thought that one can make it totally on their own. It happens, but it’s far more likely to happen if you have the support of friends within the industry. I’m fortunate enough to know some really cool people, and while I am bad about hitting people up for favors or help, I know the option is always there. But it’s much more than “What can you do for me?” While many of the people in my life think it’s great that I write and respect my efforts, it’s my friendships with writers, artists, and musicians that inspire me to push myself.

Early in the morning when it feels like I’m the only one on the planet, I know I’m never alone…because I have friends who get what I’m doing.

Friday night at Podcast Movement kicked off with a mariachi band and a comedy show. During lunch breaks, there were live shows recorded and other entertaining things going on. The general review of the conference was, “I learned a lot, met great people, and had a blast!”

The novel I’m working on is a serious thing. My last book was serious as well. Just because I write serious fiction and I’m serious about writing, though, doesn’t mean I don’t have fun. At the very least, writing is satisfying; at its best, for me at least, it’s fun.

I get that it can be difficult and even painful — that many say they can’t help but write. Podcast Movement was a serious conference, but it was still a lot of fun. Writing is serious work, but there’s room for fun as well — never forget that!

If you didn’t read the entry about Podcast Movement I linked to up above, the gist is this: I bailed on Friday night’s activities to pick up a complete stranger.

I could have arrived early to the kickoff of the conference and started networking on the night built for networking. Instead, I hit the airport, not even knowing if I was in the right terminal for Jesse’s flight in from Nova Scotia. (I wasn’t.) Hanging out Friday was the highlight of last weekend — and it was a great weekend full of all kinds of wonderful things.

I’ve seen my fair share of writers who keep to themselves and don’t share. When they want something, they only think about what’s in it for them. Favors are a one-way street as they climb toward whatever it is they seek. The writers I know who make a comfortable living writing fiction are generous. They take time out to help others because they remember what it was like being new to it all.

In the end, no matter the industry, it’s a pretty universal thing: no one wants to work with an asshole.

While it’s a conference geared more toward making money with podcasts, it was still worth it to me…even though I seek other things from podcasting. I learned a lot and made new friends. Whether we write, make music, make art, or just put in hours at a day job, there are worse ways to spend one’s time than learning and meeting people.