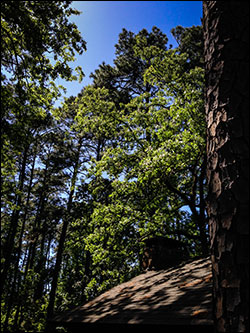 A couple weeks ago, I mentioned a second annual writing retreat was happening. With last year’s retreat a success, there was no way a friend and I weren’t going to make it an annual thing.

There are plenty of lakes with weekend cabins not too far away, and thanks to the mightiness that is the Internet, you can jump on a number of sites and rent houses for the weekend. But I’m a sucker for Texas state parks…so Friday morning we headed out to east Texas, to Caddo Lake State Park for a weekend of writing.

Last year’s cabin was nice, but we definitely liked the cabins at Caddo Lake State Park even more. East Texas is a strange place — until you see bayous filled with cypress trees, you could be in Wisconsin or even out in parts Utah for all you know. Throw in a log cabin made by the Civilian Conservation Corps in the 30s, and it has more a feel of a national park than a state park. But Texas does seem like a country all its own at times, so that’s really no surprise.

It was another year sitting in hard, wooden chairs and writing. I don’t know why, but I like that. If I wanted, I could have brought some kind of padding for the chair, but the spartan setting makes writing feel like the work it is. That’s my favorite thing about the retreats: the effort of it all. At home, in the comfort of my office, I can be just as productive, but making that effort to go someplace else to write, if even for a few days, is a great reminder that one takes writing seriously.

At home, if I want…I can get up and wander. I shut distractions down when I write, but I could always jump online or do something else if I’m not feeling like writing at the moment. It’s not uncommon to go out and do something with my wife when I don’t want to write and come home to write later. But when you’re at a small, wooden table and seated on a hard chair — listening to the clacking of keys from another writer right across from you — you really have no choice but write and be reminded that once you start, even if you don’t feel like writing, the words come to you…

This year, I’m into a section of the novel-in-progress that has some hazy areas. Not that I’m not sure they will work or not, but rather: there are sections that I just haven’t thought about at all, other than, “Okay, this is where June and her father are now and I have some chapters of this section written, but I need a way to ease into it all, but still make it matter.” Things are no longer hazy — that is what these kinds of weekends are for. I do them at home, too…I just hole up, disconnected from the world and write until it becomes clear, but there’s something nice about that process happening someplace else.

My writing bud, Deacon, was at a place in his novel he wasn’t so sure about. With time to just sit and plot and then crank away and write, he walked away from the weekend feeling like he can see the entire path to the end of his novel-in-progress.

I think that’s one of the best things about a writing retreat like this. I have other writing friends who stay in nicer places for their retreats and have rooms where they can write in total silence. But sitting in a cabin across from someone, there’s a compulsion to keep moving in a way that may not hit when alone. It’s like watching someone climb a wall — the sound of fingers on a keyboard another step up, and you don’t want to find yourself standing at the bottom looking up, so you climb no matter what.

Retreating from the Retreat

Last year’s retreat was in mid May, during some early Texas heat. While we intended on hiking and doing some other things, the heat kept us in until after dark. It was much nicer last weekend in east Texas, so…some breaks were had.

After Friday’s initial writing session, it was down the road for a beer while waiting for a ride on the Graceful Ghost steamboat.

The huffing of the steam engine and the breeze through the cypress trees was enough to make me want to nap instead of taking in the scenery.

A Walk in the Woods

One of my favorite things about the cabins at Caddo Lake State Park? There’s a trailhead right outside the cabin area!

I tend to wake up before Deacon, so Saturday morning — with temperatures in the mid to upper 50s — I had to begin the day with a hike!

When I returned to the cabin, Deacon was awake and ready to hike, so…I did it all over again before getting to a productive day of writing.

Beverages play an important role in writing. While I have become the freakish writer who does not drink coffee, Deacon drank coffee from Captain America’s head (while I drank green tea and water all day). 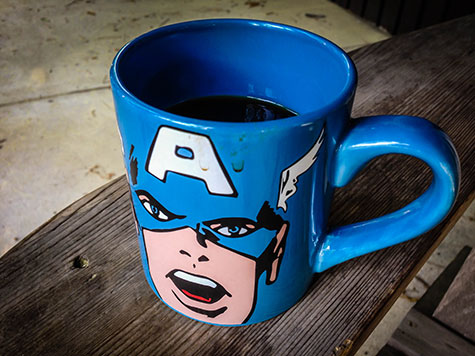 Of course, beer was had.

And there was plenty of talking into the night about writing and all sorts of other things.

We weren’t even out of the park on the day we left the retreat behind when Deacon said, “Ya know, I’m sure there are other great places for a retreat, but I’m thinking this might be the place for retreats every year.”

He will get no argument from me…