You are here: Home / Inspiration / William Shatner’s The Captains 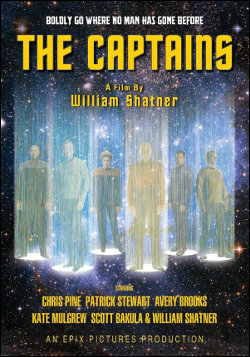 My earliest memories of the original series are from when I had chicken pox and spent a couple weeks being watched by my grandmother. My mom’s mom remarried, and the man she married was simply known to me as Pop — and there were few people on the planet as cool as him in my eyes. Pop had this ugly, sorta faux velvet recliner. (Ah, the 60s and 70s!) Star Trek was in syndication, and Pop loved the show. When it was on, I climbed into the recliner with him and we watched it together.

Flash forward to Star Trek: The Next Generation. Friends loved it, but it was something I didn’t watch. I’d catch episodes and enjoy them, but I’ve always been weird about sci-fi — only certain things caught my attention enough that I’d seek it out on my own. Star Trek was not one of those things. If I didn’t catch it at a friend’s place, I didn’t catch it at all.

Then along came Cynthia…

My wife is a sci-fi fan, and she has very fond memories of her father getting her into Star Trek. She didn’t just get DNA from her father — she got a love of sci-fi, superheroes, and certain kinds of fantasy. In the almost 20 years we’ve been together, she’s watched a lot of Star Trek reruns, and I’ve been present and seen it all — with the exception of maybe a few episodes from the original series and most of Deep Space Nine.

But default, I know Star Trek.

I recently wrote about how focused I was on writing when I was younger and how so many other things slipped away from me. In the past few years, I’ve come to realize I’m fine not cranking out books. Taking my time to write the best books I can, but more than that — making time for the other things in life beside writing that I love — has put me in a place where I’m writing the kinds of stories I’ve only dreamed of writing and having an outlook on everyday things that makes life and writing the best it’s ever been.

The Captains isn’t about Star Trek as much as it’s about what I just said. It’s about how precious life is and how the sacrifices we make when focusing on creating something to the point of it becoming almost a sickness can be quite a damning thing. My regrets are nothing when compared to Sir Patrick Stewart’s, but there are times lost to writing that I’ll never get back.

But in the final chat between Shatner and Stewart, I’m okay with that. The important thing is I’ve finally found a balance in life that makes me happy.

In the end, that’s what The Captains is really about.