You are here: Home / Ebooks / Kickstarting a Relaunch 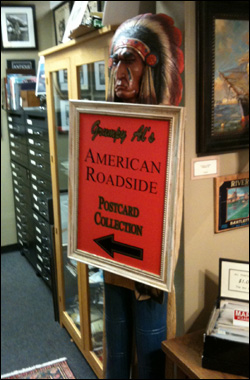 On Sunday, I mentioned that I did a very poor job promoting Hell Comes with Wood Paneled Doors (HCWWPD).

I tossed it out there and that was that.

The interesting thing about the Internet is writers have a chance to follow up with promoting things. Used to be — a book came out and there was a window of interest. It wasn’t as easy to talk about something that’s been out awhile and generate interest months later. But that’s changed.

If I want to (and I do), I can start over with HCWWPD. I can do giveaways and try to generate the buzz I didn’t generate when I first released the story.

Since it’s not a print book, I can offer a new cover without reprinting. I can add content. (I wouldn’t alter the story in any way, but I could include some dropped scenes that didn’t make the cut in the back of the book. I could include some interviews. I could even try getting people to submit short essays about something memorable that happened on a road trip they’ve been on.)

In short, I could add content to the back of the book that’s the literary equivalent of bonus features on a DVD.

I mentioned Chuck Wendig’s Kickstarter effort in my last post. I’ve seen quite a few writers use Kickstarter as a way to offer a little something more to readers.

You can’t really sign an e-book after all. But you can do some cool things for readers if you think about it.

If you’re not familiar with Kickstarter, here’s a quick rundown. You pitch a project with a monetary goal in mind. Then, similar to offerings by public TV/radio pledge drives, you offer different things at different pledge levels. Hit your goal and those who have pledged money are billed. (The exchange is handled through Amazon.)

It’s kind of like the good ol’ days of patronage.

Wish You Were Here (You’re Probably Glad You’re Not)

Were I to go the Kickstarter route, I’d commission a piece of art of the O’Briens from HCWWPD standing in front of The Inferno (the station wagon). The first level of pledging would get the re-released e-book before it’s available on Amazon and a signed copy of the O’Briens postcard…kind of the closest thing to a signed e-book.

At higher donations, I’d offer a postcard from one of the states on the O’Brien’s voyage, written as though it came from one of the characters about what they are doing or thinking at that point on their trip.

Above that pledge level, perhaps a series of postcards from a member of the family — a mini story discussing things that may not even be mentioned in the book. Essentially, an original story from the characters that only the person pledging at that level would get. (I’ve always been a little fascinated with treating original short stories like original art — offering a story that will never be printed elsewhere to a “collector.”)

My wife and I love antique shops, and when we go, I can often be found looking through old postcards. Sometimes you find old postcards that were actually used — maybe a postcard from the Smiths to the Joneses from 1937 on their trip to the Grand Canyon.

I’ve also toyed with the thought of — at a certain pledge level — offering vintage cards as though they were written from the time they were printed. Some might think this a travesty, to befoul an old postcard, but there are thousands of the things packed away in antique shops for $.50 – $5.00 that will never be seen.

Again, this plays off the original story — and again, at another level, maybe a series of postcards telling a story.

I’ve really only started to think about all this…at least seriously.

Ideally, a relaunch around Memorial Day, when the summer really kicks off, is an ideal time to do this.

I have some other ideas I’m knocking around as well, and I’d love to hear any ideas you might have.