You are here: Home / Writing Tips / The Things Not Said 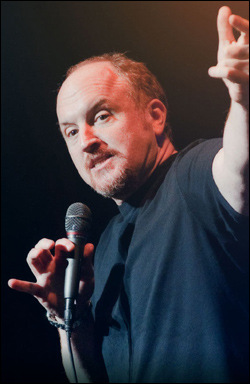 I thought about writing a post about things known writers can do with direct distribution, but changed my mind as I sat down to write this. (If you’re not familiar with Live at the Beacon Theater, Louis CK funded the production himself, edited the show, and distributed it with no DRM for $5 at this site, totally sidestepping the normal way of doing things.)

There’s a bit in his set that I just loved, because it did two things (as his comedy often does): it made me laugh, and it made me feel for him.

(Doing those two things, side by side, are comic — and writing — gold!)

A fair amount of Louis CK’s comedy is about getting older. Sometimes he comes right out and talks about how cruddy getting older can be, like this bit from an older set:

But other times, the pain of aging is not so obvious.

Something More than Just a Laugh

In a bit from the Live at the Beacon Theater set, Louis talks about how he used to drink and do drugs. He talks about being older and getting high with some 20-year-olds after a show, once. The bit had my wife and I rolling with laughter, but there was something else beneath it all.

While he had the crowd roaring with laughter, it was really all about how things had changed while he wasn’t looking…how something he once did regularly wrecked him one evening. There was this realization that a large part of who he once was had slipped away, and how he now hovers somewhere between the past and where he’s going (as we all do). It was subtle, and it was there.

So what does this have to do with writing?

Subtle and There (Show, Don’t Tell)

There’s something to be said for just saying things in a story — coming right out and telling readers what happens, or what characters are thinking.

“Louie paused when it was all done and thought about how the past was behind him and the future was unknown.”

But there’s something more when you can make a scene seem that it’s about one thing (the effects of smoking something much more potent than when you were younger), when it’s really about something else (“Damn, I’m getting old…”).

Sometimes not coming right out and making every little thing so clear works best. (“Was that a physical bit about getting high, or something deeper about aging?”)

They are often the scenes in stories that lead to discussion. (“I saw it as something else…”)

Sometimes they are the scenes that readers think about when something is revealed down the line. (“Oh! That earlier scene that seemed to be about that one thing was really a precursor to the emotional bomb dropped in this scene!”)

So many times, it’s the things we don’t say that speak the loudest in a story.

This clip really doesn’t really have much to do with the theme of this post, but I’ve always loved it — so here it is.

This isn’t from Live at the Beacon Theater, but it’s what I like about Louis: he starts out with a level of honesty that some people find uncomfortable, but near the end takes it beyond just a joke and into a struggle with not knowing things (while trying to be a good parent) and tying it back to the beginning of the bit.

(Okay, so I guess it does have something to do with the theme of this post when looking at it like that.)