You are here: Home / juggling / From a Basic Foundation 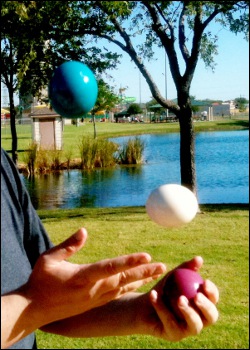 The basis for advanced juggling patterns is the three-ball cascade. *

Writing isn’t too much different than juggling. When writing stories, three things are also the basis for advanced techniques: a beginning, a middle, and an end.

A story with a beginning, middle, and end is so basic that it seems almost strange mentioning it to many. But there are writers who just sit down and write, and sometimes really don’t tell much of a tale.

Literary/hipster fave, Michael Chabon, acknowledged in the introduction to McSweeney’s Mammoth Treasure of Thrilling Tales that he was guilty of writing stories without real plots. He confessed that he just kind of wrote and didn’t have much of a tale to tell. He turned his attention to genre fiction and plot-driven fiction after the Thrilling Tales release.

He returned to the basics.

It’s not much different with writing. Once a writer has the basic structure of a story down, they can move on to more advanced structures (moving back and forth through timelines without jarring the reader). They can expand their story length (short stories to novels). And they can move on to different things (screenplays, plays, transmedia, etc.)

And for those times when it all seems like too much to handle?

A return to the basics and remembering all you’ve done before serves as a reminder that you can do whatever you put your mind to — whether juggling, writing, or anything else!