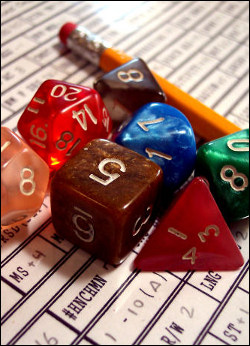 I was playing Dungeons and Dragons (D&D) with a friend when the US Olympic hockey team beat the Russians. We paused for a moment to watch the Miracle on Ice unfold — then we promptly returned to slaying orcs and kobolds…

I grew up in northern Illinois. When I was a little older and went skiing at Lake Geneva, Wisconsin, I was more excited about being in the town where TSR Games was based than skiing for my first time. (TSR was the company behind D&D…)

Later, I discovered other games: Gangbusters, Top Secret, Gamma World, and Boot Hill. But it always seemed to circle back to D&D…

My teen years (and a little bit of time on each side) were spent lost in stories controlled by rulebooks and the random rolls of dice.

While I’ve never turned a role playing game into a story, I owe my ability to adapt as a writer to all those hours running games.

So many times, I had an outline for a game: all the people and things players would encounter, places they’d go, and things that would happen to them along the way. Sometimes it was a one-shot adventure, but most times it was an ongoing campaign.

I quickly learned that things rarely went as planned.

Outlines Are Just That

No matter how much I planned, inevitably, the games I ran changed as we played. To see my friends coming up with something I didn’t expect and force them into my plans would have ruined the feeling for them that the games and worlds I created were open places where they could do what they wanted. So I rolled with it.

The first few times things changed, I had a tough time adapting. But the more I ran games, the more I was able to make up involved stories on the fly, based on my friends’ actions in the game.

Today, there are times I’m deep into an involved story and better ideas come along. Instead of sticking to my outline, I roll with it and find a more exciting and better story in the end.

As a reader, I like to be surprised. I don’t like twist endings or other things some writers do to manipulate their audience, but I like when a story unravels in a way I didn’t expect.

As a writer, I also like to be surprised. Just like running role playing games years ago, I use a rough outline, and I’m not afraid to have it change after I start.

With a fistful of dice and a head packed with ideas, I learned years ago that sometimes the best stories often unfold along the way…